Happy Belated New Year, and a Happy Mid-Winter Term! I hope everyone has been enjoying their time off, and if not, that everyone can take comfort in knowing that the new semester is only half a month away.

Though Oberlin may seem like a distant memory for students knee-deep in their Winter Term projects--or, if you're on campus, a memory that you'd like to get rid of so you can bask in the peace and quiet--it seems as if the world is deadset on reminding us.

Let me set the stage: for my first Winter Term, I am working as an intern for the Youth Program Manager of the Carnegie Museum of Natural History in Pittsburgh, PA. That's a long sentence that could be rewritten as "I work odd jobs for the Education department and oversee a lot of middle-school volunteers." I assure you that it's great fun, and for someone interested in working in museums for a career, great experience. As a bonus to an art geek like me, the Carnegie Museums of Natural History and Art are conglomerated in one building, and when my shifts are through I enjoy heading next door to wash away the day's middle-school gossip with a stroll through the galleries.

That's how I stumbled upon Cory Arcangel.

I don't know if that's his real name. Somehow it feels too unique and slick to possibly be real. "Cory Arcangel" sounds like the cool alter-ego of a comic book superhero, or maybe the lead singer of a British metal band. Arcangel is neither, however. He is an artist specializing in digital media, combining internet culture, modern technology, and a touch of irony in his works now on view in the Carnegie's Forum 70 gallery, titled Masters.

And Cory Arcangel is an Oberlin alum.

Imagine me browsing through a tiny gallery. The walls have been wallpapered in a black-and-white print that resembles a tiled QR code. Six enormous flatscreen tv's are lined up in the center of the room, each playing a looped video piece that you are invited to pull up a folding chair to. Two glass display cases house collections of sketches and other paper works. Outside, on a roped-off table, two sleek Apple computers sit side-by-side, emitting occasional pings; their placard explains they are running a version of Microsoft Entourage that has been programmed to exchange out-of-office emails infinitely, and when the data finally overwhelms the system, viewers can watch them crash. Satisfied with my meandering, I pick up a brightly-colored brochure from the exhibit to read about the artist, and a single word jumps out from the page: Oberlin. 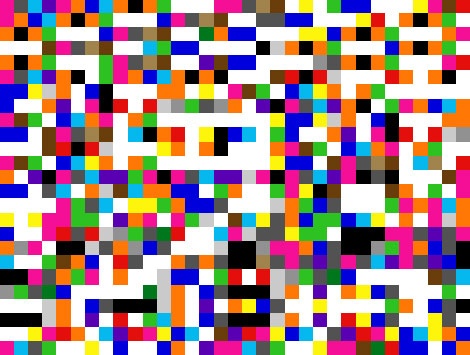 Truthfully, I have never heard of Cory Arcangel before, so I tried to get a feel for what kind of Obie he might've been. His artist's bio told me he was a Con student and that he lived in Brooklyn. His brochure narrated a story about going to a party in the 90s and finding inspiration through techno music. He had placed labels around the gallery asking visitors to tweet about the installation using the hashtag #yolo. One of his pieces was a video that compiled over a hundred YouTube videos of cats interacting with pianos. I didn't stay long enough to see if Keyboard Cat was included.

I lied: I'm going to talk about Lena Dunham. Don't worry, it'll be over soon. A few days before the Golden Globes, my parents asked me at dinner if I knew the creator of "that new HBO show." After I explained who she was and why I'm not that excited about her stardom, they shrugged and left it at that. My mom said something about HBO and its reputation for nudity and "pushing the limits" and how it was a shame, that one alum can have such a big hand in how the public perceive a college.

Famous alumni are important to schools. Not just because they earn the big cash that has the potential to become big donations, but also because they give students, both past and present, something to be proud of. We can watch them accomplish great things and boast that we're from the same mold.

But what about the alumni we don't hear from?

I'm not saying Cory Arcangel is invisible; clearly, if he's got an installation going in a museum in a major city, he's doing pretty well for himself by artists' standards. As a visitor familiar with internet culture, I enjoyed his show. But before I read "Oberlin," Cory Arcangel was a name that meant nothing to me. After I read of our shared education, I wondered if he thinks Oberlin still inspires him. I wondered what he thinks of Lena Dunham. I wondered if he were as well-known as she, what I would think of him. If Arcangel's exhibit had a definite theme, I would interpret it as thus: digital is global, and global is how we live now. Internet culture is about sharing, about making the obscure commonplace. Though Oberlin is far from having the global reputation of the Ivy Leagues, it's taking baby steps and our alumni are its baby shoes. That doesn't mean our future is a certainty. Who are we to predict how our alumni may rise and fall? Lena Dunham may disappear from the scene; Cory Arcangel might earn the household-name status that his awesome British metal band name is practically designed for. They might not have much in common, but they do have Oberlin. Someday I will too, whether or not I end up starring in the conversation at some first year's dinner table.

Your second-to-last paragraph floored me. This. TOTALLY this. The ebb and flow of people and popular culture affects many things, and marketers have to take that into account whenever doing anything.

Our alums are our bread and butter for the reasons you mentioned, but even more beyond that: alums are the biggest advocates Oberlin has to offer to the world. We're all ambassadors, precisely for that moment you mentioned: you caught the word Oberlin and that made you think WAY more about what that person's experience was like and how it connected to you and others.

In short: be loud, be proud, and inspire conversations just because of your Oberlin connection. You did just that with this post (proof: I sent it to three people already :P).

Glad you have come across Cory. See the May 2011 New Yorker article about him which I directed to by my high school son. As far as Lena goes, just as Oberlin students are a diverse lot, so are Oberlin parents. My wife and I love her work.

Oberlin has a rich alumni network both within and outside the country.

Oberlin has a long list of notable alumni who have made their mark in all walks of life.

When one thing closes, another opens.