Like most Oberlin freshmen, I'm taking a first-year seminar class this semester, which, if you don't already know, is Oberlin's way to ensure that freshmen get to be in at least one small, discussion-based class during their first semester here, as well as to hopefully improve their ability to write a cogent essay.

I'm really grateful to have ended up in David Walker's class (called Crossing Borders: The Mysteries of Identity). I know I'm not the only one grateful for his seminar; if you poke around on this blog site you'll notice that this class has gotten a disproportionate amount of praise by other bloggers who have taken it in past years, as well as my friend Ben who is currently taking the class with me now. Could this have something to do with the fact that David sits on the board that reads the blogger applications? No. It's just a weird coincidence. Favoritism definitely isn't his style.

The class focuses in on the issues of defining sexuality, race and gender. At the beginning of the semester, I thought it was relatively easy to define these things for a person. Later on, I came to realize that, like most things in this world, sexuality, race and gender are more ambiguous than one would initially think and often impossible to quite put one's finger on with words. Now, though, I just have absolutely no idea about any of it. It seems to me, when I really think about it (which I have been doing for almost the past four months now), that although sexuality, race and gender do exist as general concepts, they don't really apply to individual people... at all. What I'm saying here is that I don't think anyone can define their own sexuality, race or gender with words. Words like straight, gay, bisexual, asian, white, hispanic, male, female are all just ideological boxes. Boxes, which in practice, don't really fit. 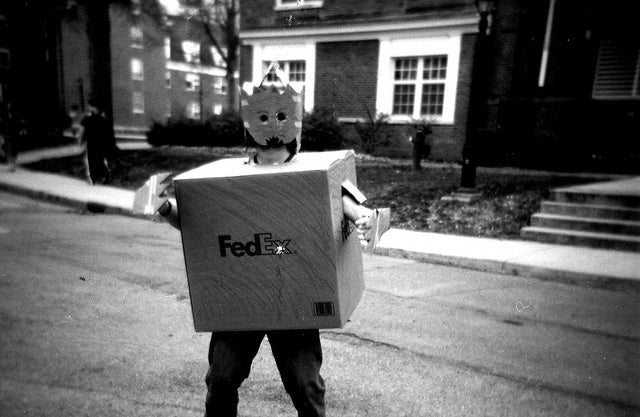 This guy doesn't seem too happy to be in a box.

If you're still following my train of logic here, which I can imagine some of you aren't, then you are probably thinking to yourself: okay, I get that. Hardly anyone has the genetic background from only one race, and I've seen people who change their sexual orientation. Fine. But gender? Can't you only really be one or the other?

I initially thought the same thing. But the answer I've ultimately come up with to that question is no. Gender, just like race and sexuality, is a spectrum. Let me clarify here that there is a difference between a person's biological sex and their gender identity. Most people do indeed most strongly identify with the gender that corresponds with their biological sex, but this is not always the case.

It makes a lot of sense, if you think about it. You've probably noticed that some men embody more feminine characteristics and some women act more masculine. And if at this sentence you immediately jump at the thought that I'm stereotyping feminine and masculine behavior, than be assured that I am speaking in quite technical terms. Testosterone and estrogen have markedly different effects; the former is typically associated with aggression and the promotion of a sex drive, while the latter is strongly correlated with moodiness and empathy. For more about this, click here.

Last week I got the chance to talk to another one of my classmates in my first-year seminar about her own personal experience with these hormones. About a year and a half ago, she discovered that, although male-bodied, she identified as a woman. Since then, she has begun transitioning, which for her includes hormone therapy. She has the unique experience of knowing what it is like, on a chemical level, to feel what both a young man and a young woman feel like going through puberty. How neat is that?

What I find really fascinating is how she described the change she noticed in her emotional range when she started taking estrogen. The highs are much higher and the lows are much lower. She says she cries a lot more easily now.

Lately during discussion in my seminar class, I've found myself mentally paralyzed and unable to contribute to discussion. Even within the context of the class, which strives to break down the barriers of identity (or "cross the border," to refer to the actual title of the class), we still spend a lot of time trying to put into words what people are or aren't. Words like female-bodied, cisgendered, and transexual, can be empowering, but ultimately are still boxes.

I guess what I'm saying here is that ideally, we'd all live in a society free of social norms, stereotypes, and expectations based on physical appearances. I think as far as these fantasies go, Oberlin is probably about as close as it gets. Unfortunately, we are a small bubble in a big world, a world where gender identity hasn't even crossed most people's minds.

Gender is here to stay, as is sexuality and race. Gender, as it turns out, has even infiltrated my food. I work and eat in the Kosher Halal Co-op, which abides by the rules and dietary restrictions outlined in both Jewish and Muslim doctrine. One of the rules is that meat and dairy must remain separate. Items that are neither dairy or meat are called "parve." Sometimes, someone will make a mistake and cross-contaminate a parve item with something that is used only for dairy or only for meat. Strangely enough, when this happens, we say that the item has been "gendered."

I don't know why this is the term we use, but it is. That's why today, when I opened up a refrigerator in search of ice-cream and instead was met with the sight of the pan pictured below, it inspired me to write this blog post. 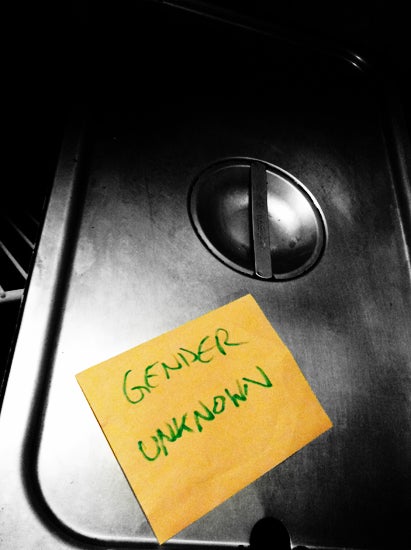 So, as my college moves me away from defining people by gender binaries, it paradoxically leads me to gender my food. I guess this just goes to show how little words really mean when we start trying to use them.

Thinking about gender/identity issues is such an important part of your Oberlin education! I feel like sometimes it's difficult to talk about these things, not only on the blogs, but in real life, because while so many people here are so educated about gender/have a lot of feelings about it, people outside Oberlin (relatives, prospective students) don't necessarily understand what's going on, or even that it's an issue. I'm really glad you got your perspective out there.

I love this post (especially that second picture- how funny!). But it captures Oberlin so well and the kind of thinking that exists here. I never really thought about gender as a fluid spectrum until I came to Oberlin and started having conversations like this with people in gender studies classes (or other classes, really). Unlike you, though, it took me years to really start thinking for myself this way - when people would bring up gender constructs in conversation (which happens here!), I never really knew what they were talking about, or understood them. It basically took me up until last year for me to really change the way I viewed things. This is all to say that I'm really glad you've gotten so much out of your freshman seminar! And it's the kind of thinking that definitely doesn't happen overnight.

Thanks Eleanor and Paris! I really appreciate your supportive comments.

I'm surprised Ida hasn't latched onto this post yet, because my associations with things being gendered have almost entirely to do with language. I grew up with Hebrew all around me, and in Hebrew (and many many many other languages), words are designated a certain gender or another so you that you can modify it and the words around it properly. I've always been sorta terrible at it, but I'll mark that up to not knowing why specific objects have been assigned genders in the first place (and that my associations with objects rarely have to do with gender). Strange but interesting.

crossing borders did wonderful things for me when i took it over four years ago! i met with david walker over fall break and he suggested that i read my final paper from CB. so i did. and 19 year old me shocked 22 year old me. save your paper somewhere and read it in four years! it could be super extra interesting.