I woke up yesterday with a clear to-do list for the day. First, I would get up early and finish my blog post called "A Typical Monday in Oberlin," which I started over the weekend to try to explain the busy and go-getting life of a typical Obie. Then I would do my typical Monday routines - go to class, go to Harkness for lunch, go to work at the rock wall, finish my chemistry assignments, drink a bunch of coffee, etc.

Little did I know, I was waking up to one of the most atypical Mondays, or perhaps days, I've ever had at Oberlin. As soon as I stumbled into my kitchen, still clad in PJs, my housemate Sophia (sitting at the kitchen table) looked up from her computer and said, "Class is cancelled."

My first thought: Someone has died. Second thought: There was a blizzard overnight. But no, that's impossible, the sun is shining for once - and besides, Oberlin never cancels class for snow. Third thought: Someone must have died.

"Why??" I asked fearfully. "Did something bad happen?"

"Apparently someone was spotted last night dressed in a KKK outfit," Sophia explained, "near South Bowl."

In other words, near Afrikan Heritage House. It soon became clear that this was the serious tipping point after a series of racial, homophobic and anti-semitic slurs and discriminations from the past month. Vandalized posters with the n-word and swastikas have appeared in the science center and in dorms, and a couple weeks ago a student was reported to be physically harassed for his/her racial identity. And this problem isn't just a recent one - there were a few homophobic and racist vandalism incidents last year, as well.

To be honest, my first reaction, as opposed to fear or sadness or anger, was simply shock. I could not believe that someone on this campus would do something like that, as either a form of a threat or a sick joke. I mean, what? Where do I live? Where do I go to school again? It literally blows my mind that even at a college known for being one of the first in the country to accept African Americans in history, even in a country that has an African American as its president, we still have people who terrorize others based on their race, and feel the need to demonstrate their power through the color of their skin. We live in 2013, not the 1950s, and besides, this is Oberlin, for crying out loud. We pride ourselves on equality, diversity, and recognition of privilege and oppression. How is it possible that this is happening?

Gradually, the shock wore off and sadness and anger swept in - sadness that this kind of racism does still exist, that even at Oberlin, a campus in which I view as incredibly progressive and even sometimes as a bubble of perfection. It makes me wonder if racism will ever go away. If it can't go away at Oberlin, when will it?

Either way, the incident yesterday definitely put my trivial issues on my to-do list into perspective. I think it was important we had class cancelled yesterday, because it gave everyone on campus the opportunity to think about these issues in greater depth than just "this is awful," and have serious conversations with each other, without someone running off to a meeting or class or lab or what have you. Probably the highlight for me was the march of solidarity, in which friends, professors, co-workers and strangers united together to form a crowd big enough to take over Tappan Square. I'm normally not one to shout my lungs out in progressive iterations, but the energy and momentum in the mass of people was enough to bring out the passionate side of myself. I suppose if you chant:

with enough people and enough times, you'll get into that frame of mind too. 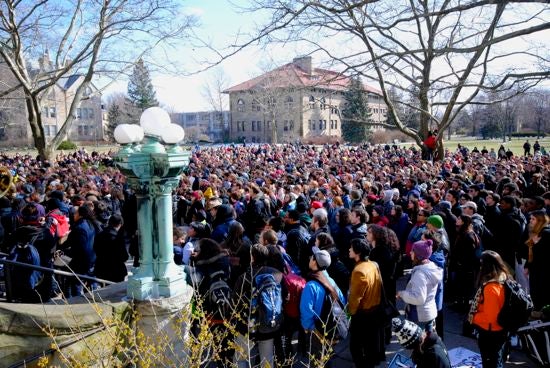 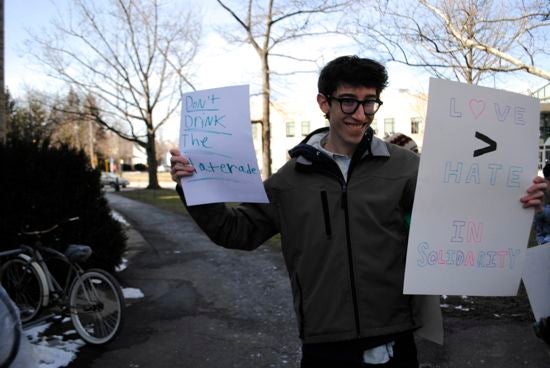 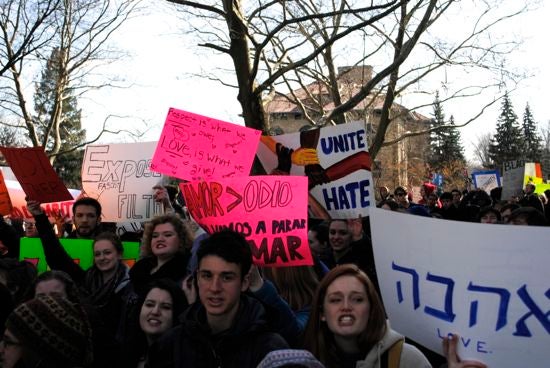 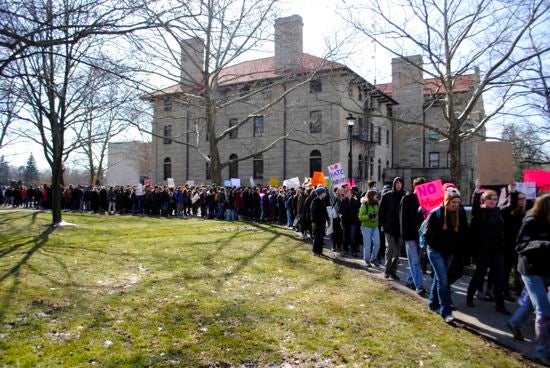 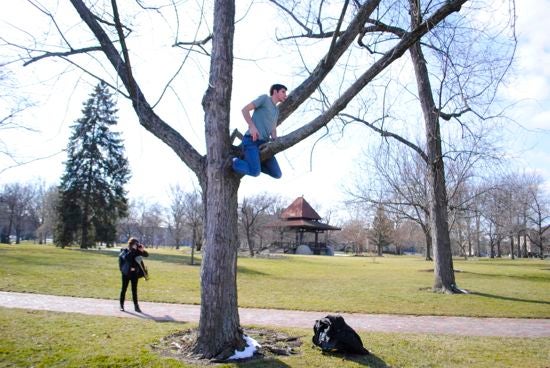 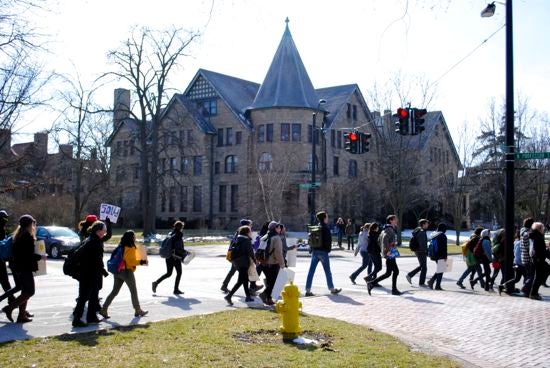 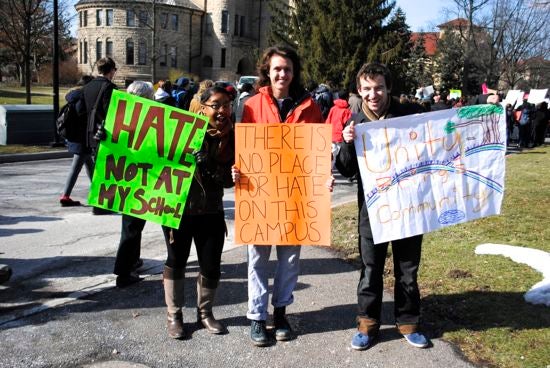 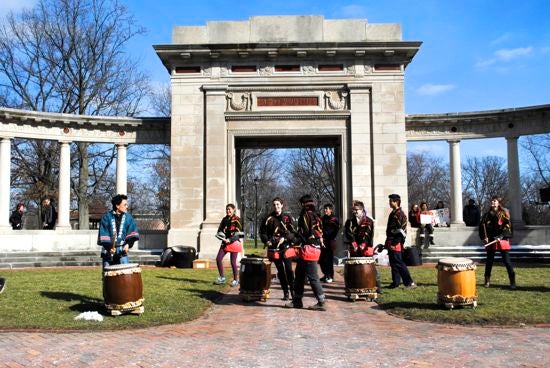 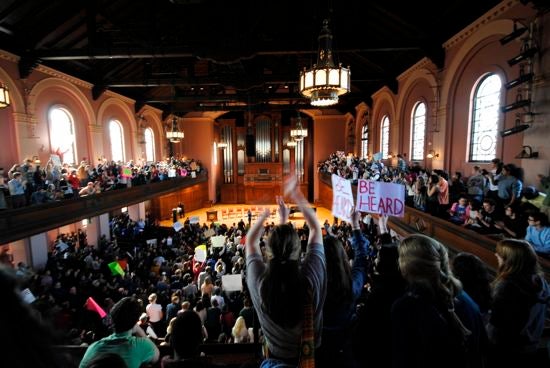 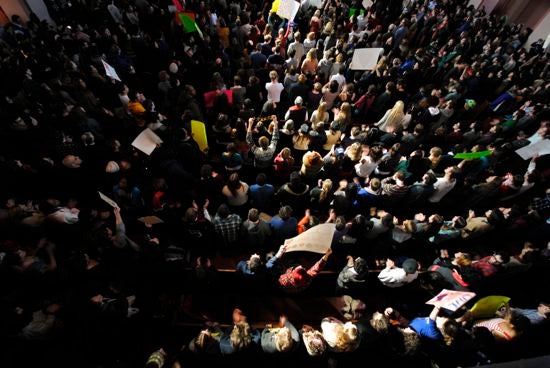 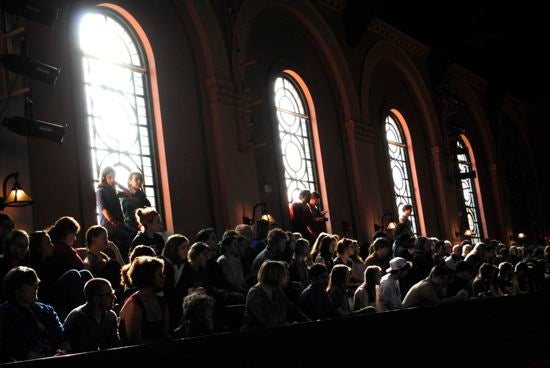 As my friend Hilary Neff put it when I ran into her at the march, "this crowd beats election night by a mile." She's right. It makes me sad that it took a few horribly racist incidents to provoke such a unity, as opposed to the re-election of America's first African American president; but unfortunately, we don't live in a perfect world in which all marches are in celebration of humanity's accomplishments. If anything, though, I think Oberlin's students and faculty showed yesterday that in the face of injustice, our community is a powerful force to be reckoned with; and that the love and respect here, as well as the greater world, far outweighs the hate - or, perhaps even worse, the apathy.

When I read todays NYT I came to your blog and was happy to see your thoughts. Thanks for being wonderful you! I love you! Jamma

As a white student, I have been humbled these last few weeks to listen to many members of our community who express anger, frustration, and fear, but not surprise. It has been important for me to remember that as much fondness and respect as I have for Oberlin, it is certainly not perfect nor a bubble, and that the safety and welcome I feel in this place depend on privileges I have. I hope the displays of community support we saw Monday continue forward, and that we can find creative and concrete ways to dismantle the oppressions that exist here in Oberlin, as well as in other parts of the world.

I second what Nora said. Feeling surprised by what happened is a tremendous privilege to enjoy, because it wasn't just a few horribly racist incidents that provoked yesterday's unity - I think it was years and years of racist incidents, infrastructures, resources, environments, etc. I think it is key to recognize the culture that the recent, highly visible racist acts are embedded in and recognize that what we must respond to is not just those acts but the sum total of the experiences of POC on this campus. I mean to say: the KKK robes were the immediate catalyst for our response, but not the cause. The cause goes far deeper and is far older.

Further, I think that saying we are a powerful force to be reckoned with is not so much a pat on the back for us Oberliners as a challenge. If we are so powerful - and, yes, we have shown that we are - how do we now use that? I think that if we let yesterday's radical, beautiful love and support lull us into a sense of closure, if we think we can say 'job well done!' now and consider the response we have already given to be adequate, we are missing the point and losing a giant opportunity and just really being super disappointing privileged folks going back to the shelter of that privilege. I want to see that not happen. I want to see how long we can push ourselves to stay in this raw, crazy, energetic place of not-apathy.

I'm an Oberlin graduate and blogger for Israelity in Israel - I'm writing an article about what's been happening at Oberlin this week - I'd love to use one of your pictures (the one with the Hebrew). Can I get permission to use that? Thanks! Brian