Max’s recent remark that not all Oberlin students are aspiring journalists reminds me of how many alumni have in fact chosen that profession. It’s no surprise, of course, that journalism appeals to our students, given that the qualities that make for a good journalist—curiosity, persistence, independence, a passion for the truth—are found in abundance on this campus. What I do find striking is how many former students have developed highly successful careers in the competitive world of journalism on the strength of an Oberlin degree.

Prospective students interested in journalism often wonder about the advisibility of coming to Oberlin, where we teach no formal journalism courses. Wouldn’t they be better off, they ask, going someplace like Northwestern or UNC, where they could take focused, pre-professional courses as a journalism major? The journalists I know say just the opposite, in fact: that a broad-based liberal arts education that trains you to think seriously and creatively, and exposes you to ideas and approaches across a range of disciplines, is much better preparation for a career that will undoubtedly take unexpected turns. A major in English, or history, or politics, or neuroscience—virtually any field, really—will train you in skills of analysis and communication that will be useful no matter what career path you follow. The specific technical skills needed in journalism can then be acquired easily in a graduate program or internships, or through on-the-job experience.

That’s the theory, anyway, but how has it worked out in practice? Impressively well, actually, judging from the list of Obie journalists I jotted down within a few minutes. Here’s just a sampling: Adam Moss (Oberlin class of ’79), editor-in-chief of New York magazine, and former editor of the Sunday New York Times Magazine. Earlier he worked for Rolling Stone, Esquire, and a wonderful weekly magazine he founded called 7 Days, but he got his start as the editor of the Oberlin Review. Here are an online interview with Adam and videos of three appearances on the Charlie Rose Show on PBS.

Michael Duffy (’80) edited the Review the year after Adam, and has been at the center of Time magazine’s political coverage for over 20 years, writing or co-writing more than 40 Time cover stories, including, most recently, reports on President Bush’s proposed surge plan for Iraq, the Iraq Study Group, and an examination of what war with Iran might look like. Now assistant managing editor, he also appears regularly on PBS’s Washington Week. 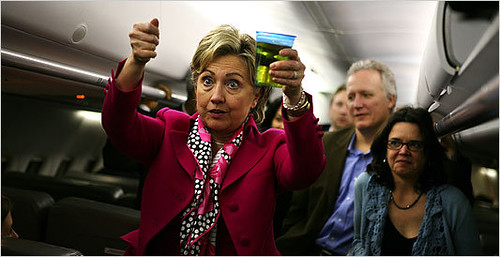 Beth Fouhy (’83) was the primary reporter covering Hillary Clinton’s presidential campaign for the Associated Press. (That’s Beth just behind Clinton in the photo above.) A recent article is her analysis of the Unity, NH, joint press conference with Barack Obama. And Ben Stocking (’81), who I believe was the Review editor the year after Michael Duffy, also works for the AP, as bureau chief in Vietnam, where he’s lived in Hanoi for the last six years. Some of his recent articles are linked here. 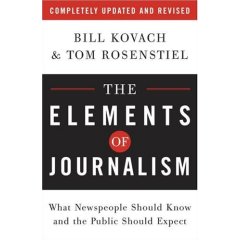 After more than 20 years as a journalist, including positions as media critic for the Los Angeles Times and chief congressional correspondent for Newsweek magazine, Tom Rosenstiel (’78) designed the Project for Excellence in Journalism and became its director. This important nonpartisan organization evaluates and reports on the performance of the press, about which Tom is a frequent commentator on radio and television and in print.

Philip Elmer-DeWitt (’71) was Time's first writer about computers and produced much of the magazine's early coverage of personal computers and the Internet. After 27 years with Time, including 12 as its science editor, he joined Business 2.0 as that magazine's executive editor. He’s now a senior editor at Fortune magazine, reporting on such companies as Apple.

Jane Pratt ('84) became founding editor of Sassy, a magazine for teenage girls, at age 24, making her the youngest editor-in-chief of a national magazine ever. The notoriety of Sassy led to two books, For Real: The Uncensored Truth About America's Teenagers and Beyond Beauty: Girls Speak Out on Looks, Style, and Stereotypes. After Sassy, Jane formed Jane magazine, a lifestyle magazine for women 18-34, for which she was named Editor of the Year in 2002 by Adweek magazine. Her talk radio program can be heard on Sirius Satellite Radio.

I’m a huge fan of NPR, so it’s always a pleasure to hear former students reporting on Morning Edition or All Things Considered. Jon Hamilton (’83), who also edited the Review (do you see a pattern emerging?), has been a science correspondent since 1998, covering such issues as neuroscience, health, behavior, and bioterrorism. You can hear some of his recent stories linked from this page. And if you hear a story on NPR about New York theater or classical music, it’s apt to be by Jeff Lunden (’80).

And another terrific radio program is produced and hosted by two Obies. Robert Krulwich (’69) is well-known as a television correspondent for CBS, ABC, NPR, and PBS; he has been called “the most inventive network reporter in television” by TV Guide. When he met composer and writer Jad Abumrad (’95), they decided to collaborate on a science program for public radio called Radiolab, which produces some of the most fascinating radio I’ve ever heard. You can listen to any of the programs here. But you might want to start with this podcast, where they talk about Oberlin and the beginning of their collaboration. Great stuff.

So do you need to major in journalism to have a successful career as a journalist?

I would add Darcy Frey and Peggy Orenstein to your list . . .

As an aspiring journalist/senior in high school, I'm so glad you posted this. While I am pretty sure that I want to be a journalist, I don't want to narrow my search to nearby schools with a good journalism program (e.g, UNC, practically my home town) and exclude good schools---such as Oberlin. unrelated question: do you have any tips for home school applicants? I do so want to get into a good school, but I'm nervous that the alternative schooling my parents chose is going to be looked down on. as a faculty member, any thoughts?

Hi, Sarah. Since I'm not directly involved with the admissions decision process, an admissions counselor (like Jesse, or Elizabeth, who handles NC) is better able to give you an official answer--you can contact them through the Admissions website. But from my perspective, I don't think you need to be worried: strong applicants who are home schooled are taken seriously and have very good chances of being accepted. Good luck with your application!

Thank you for this post!
As a print journalism-foucused prospie who has had this exact dilemma rattling around in her mind, I feel as if you have read my mind and answered all my questions effortlessly. Nobody else has laid that out so well.
I am now waiting for my admissions decision for Oberlin with fingers crossed!

You're welcome, Isabel! Glad to be of service.

I've been reminded that the editor of the Oberlin Review after Michael Duffy and before Ben Stocking was in fact Josh Hyatt '81, who is now a Senior Writer at Money Magazine. Happy to set the record straight!