My ride home started with a rainbow. Outside the windows of gate D20 at Cleveland-Hopkins International airport was without a doubt the best rainbow I've ever seen. Not a bad way to start your fall break, right? 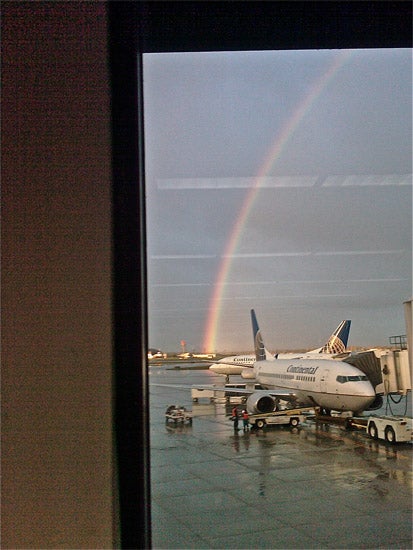 It was more vivid in person. Sorry that my cell phone's camera isn't the greatest.

While I was away from New Jersey, I missed my family the most. It sounds so cliché, fake, and scripted, but I really mean it. I love my family to death. In case you were curious, I have three beautiful and talented sisters: two older, fraternal twin sisters who are both too smart for their own good and a younger sister who is a monster at tennis. I soon remembered all of my mother's weird quirks and how much fun it is to annoy my little sister. Most importantly, I quickly recalled just how good of a cook my dad is.

Dinners throughout the week have yielded some of my all-time favorite Filipino dishes. As if that wasn't enough, my dad has been taking me out to eat at restaurants pertaining to every other Asian cuisine that I might have missed. He must have known that I had been suffering a major withdrawal of white rice, soy sauce, sesame oil, and fish. Thankfully, I took a trip to a local Korean supermarket to stock up on some yummy snacks and goods to tide me over until winter break. 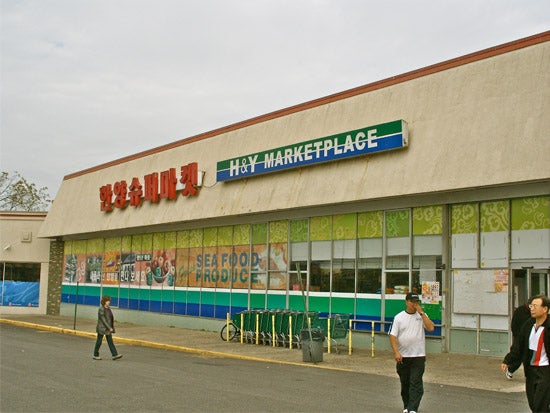 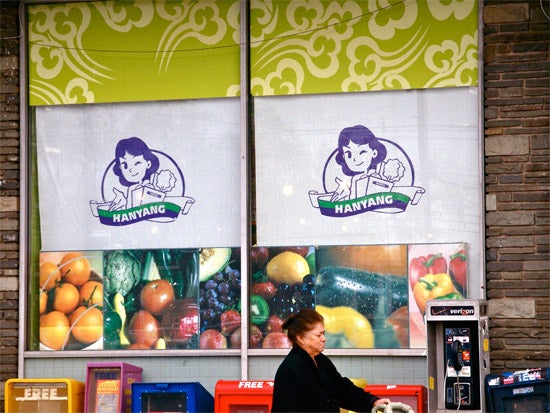 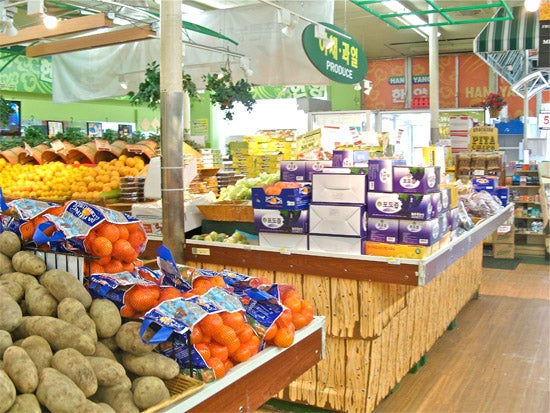 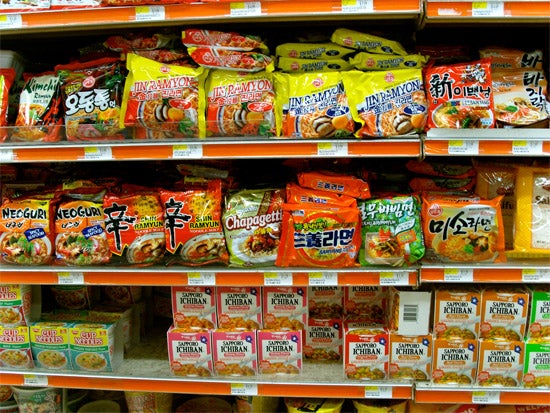 You haven't had Ramen until you've tried these.

Being home also meant the return of chores (I'm glaring at all of the red, brown, and dead leaves that are newly arriving in my yard whilst writing this). Since I am the only boy out of 4 siblings, I received the least glamorous and most strenuous chores throughout my childhood. These included taking out the trash, raking leaves, shoveling snow, vacuuming, washing dishes...er. Every chore? Anyways, my dad was happy to have me back home, but he was also secretly super glad that he had another set of hands to help out in the yard. My little sister is the darling of the family and somehow gets away without doing any chores. Sigh. 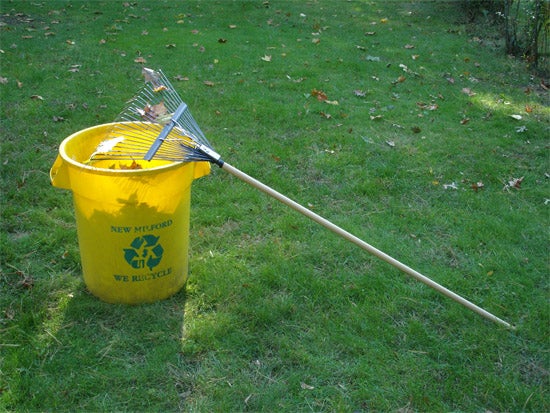 Yes, New Milford recycles. But no, not their leaves. This recycling bin serves as a transporter for leaves from the yard to the pile on the side of the road. 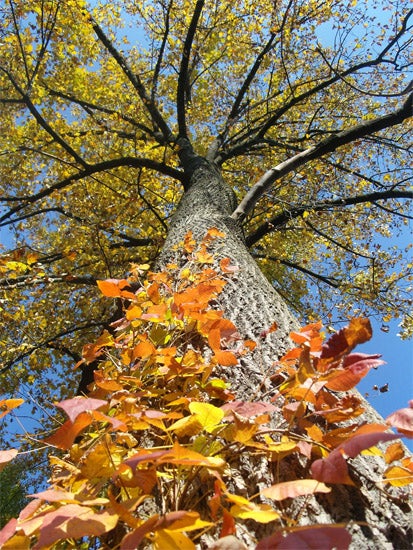 Malls are possibly one of New Jersey's most redeeming qualities. I live within 30 minutes of five malls, which is absurd now that I think about it. Also, there is no sales tax on clothing in New Jersey. Why? I don't think I'll ever know... Not that I'm complaining. Hopefully I am a little better equipped for the Ohio winter.

I took the time to pay a visit to my old high school. In my mind, I was expecting the Academies @ Englewood to be in shambles now that I was gone. I convinced myself that my high school would be completely dysfunctional without Karl Orozco in town. I imagined seeing starving teachers in raggedy clothing begging for me to return, gang graffiti decorating the lockers, trolls lurking the hallways, and a menacing gray storm cloud perpetually hovering over the main building. Sadly, or maybe fortunately, this was not the case. My high school (a very strange high school, I might add) was more or less the same. My stay was short, but in the hour that I spent roaming the halls and classrooms, I received some of the best hugs that I've gotten in a long time. Oh, how I love hugs.

A close friend and I took a trip down to Rutgers University to visit a few friends. However, this trip down to central Jersey was the most aggravating three hours of my life. To make things clearer, a normal trip to Rutgers takes about 45 minutes. It took us three hours. Three! THREE! Our car was under the control of this phantom GPS that refused to take us on the highway. For some crazy reason, the GPS led us down the backstreets of Bergen County, circled around Newark (which is a dump to say the least), and requested us to take the most ridiculously illegal turns. For instance, this demonic machine would announce, "Left turn ahead" and we would soon realize that we were trying to make a left on a one-way road. I have never been honked more times in my life, nor have I ever cursed at a piece of machinery so excessively. Nevertheless, we trudged our way down to Rutgers and surprisingly made it there in one piece. It wasn't until after we arrived that we realized the GPS had been set to the "pedestrian" setting. Meaning that we took the route to Rutgers that someone would take if they were walking. After blowing off some steam, I took a big sigh and laughed at the whole situation.

Rutgers University is decidedly very different from Oberlin. I felt like a fish out of water the whole night. I still can't comprehend how big most state universities are, and I had a hard time acknowledging the fact that my friends took buses to class. Additionally, the people that I met at Rutgers were so different from my Oberlin brethren, though that could be said about a lot of places. I admit that I'm more than slightly biased, but I left Rutgers thankful that I go to Oberlin. Really, really thankful.

I was able to hang out with more old friends than I thought I would be able to. This included a very long Saturday night that resulted in me getting less than 2 hours of sleep before heading to the airport. I really didn't catch up on sleep like I thought I would this break. Oh well! I don't regret the lost sleep at all.

New Jersey is more often than not the butt of everyone's joke, and is typically referred to as "the armpit of the United States." Ironically, it's named the Garden State when the preconception is that it's an industrial wasteland full of rude drivers and lots of Italians. While that is mostly true, there is also the side of New Jersey that I happen to know and love. During this week of adventures and endeavors throughout the Garden State, I have come up with several conclusions and realized some random facts: 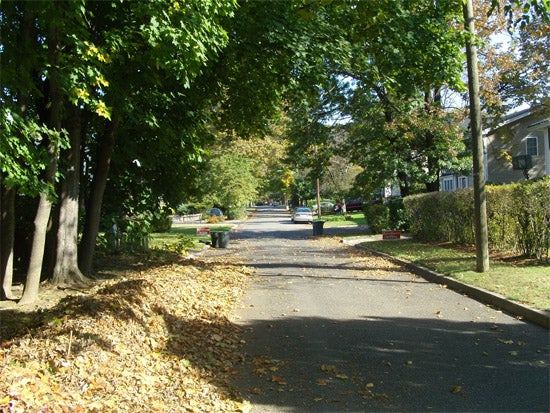 The street where I live, and the aforementioned pile of curbside leaves. Until we meet again!

You probably knew this, but Karen O went to Oberlin too. You guys are basically twins.

I dropped someone off at the airport on my way to Michigan for fall break and saw that AMAZING rainbow! Leaving the airport, it turned out to be a double rainbow. It was beautiful.

I have some of that Chapagetti ramen in my cupboard... it's tasty but I can't identify the flavors. I like buying things that look good even if I have no idea what's inside them.

That's also the best rainbow I've seen in years, and I lived in the freaking Rainbow Isle for five years. This is what you miss when you take the night bus to New York City.

Ah awesome! I have a bunch of Chapagetti in mine as well. And I agree that it has an odd taste. Something like soy sauce and...chocolate? Maybe. I like it anyways.

I miss home so much as well! The freaking midwest and all their corn. Nothing can take the place of our bubble tea!

Hanyang Mart! That made me smile!
And I'm pretty bummed I didnt catch you that day...
Hopefully you'll be able to see one of the performances that our school does.
Keep writing Karl, this page is bookmarked so its just a click away! =)

I love Anthony Bourdain too!