In my first year at Oberlin, joining the conservatory violin world was a daunting prospect. Split into two orchestral sections, violinists have the tendency to be hierarchical, competitive, and high strung. We are the opera singers of orchestral instruments, who play charming melodies, and secretly harbor that inner diva who craves the spotlight. Any violinist can tell you about the competition at music festivals and summer institutes. We’ve all had those violin friends that come up after a performance smiling and telling you what a great job you’ve done, then snickering about the note you missed behind your back. However, Oberlin is different.

My first encounter with the wonderfulness of my studio came the first time I played for my studio class. Every instrumental studio in the conservatory has a weekly studio class, where everyone gathers to listen and comment on each other’s playing. Studio class is a great place to practice performing the repertoire we learn in the practice room. However, my first studio performance was a disaster—actually, come to think of it, almost all my first-year studio performances were pretty disastrous—and I felt devastated. As someone who has a highly physical response to adrenaline, my shaky bow and lack of coordination made my Wieniawski concerto sound like I had forgotten how to play. My only wish was for the Kulas Recital Hall stage to open under my feet and swallow me up, shooting me through a magic underground tunnel back to Seattle, where I could commiserate about how little talent I had.

Unfortunately that didn’t happen. So instead I decided to hide in my room with a box of tissues and a pint of ice cream. Suddenly I received a long text message from a studio member I was only vaguely acquainted with. She talked about how she enjoyed my performance and how proud I should be of my playing and why. It was one of the kindest and most helpful texts I had ever received, and one of numerous unfailingly encouraging comments I had gotten from the other studio members that day. So I put away the tissues and the ice cream spoon and decided to go practice. Needless to say, this studio mate is now one of my best friends.

Now that I’m in my second year, studio performances have transformed from a thing of dread to a challenge that I learn from and embrace. The violinists of David Bowlin’s studio are supportive and focused on their love of music, and as strange as this may sound, that support shines through in everyone’s playing. 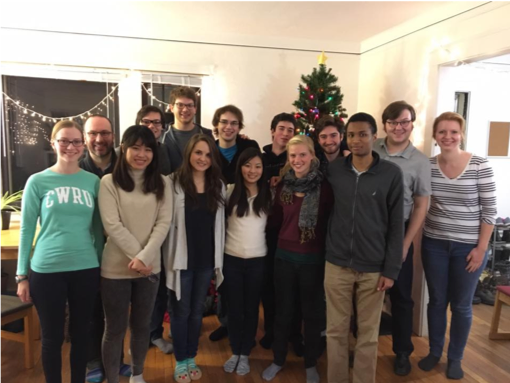 Kindness and compassion are vital traits for every member of Professor Bowlin’s studio. This is evidenced by the many studio parties, dinners, and events we organize throughout the year. We made ourselves “Team Bowlin” T-shirts and proclaimed Bowlin’s adorable puppy Morrie as our faithful mascot. (Naturally our cool, tough, sports-imitating Team Bowlin jerseys have an adorable puppy picture of Morrie on them.)

Our fall-break beach outings, hot-cocoa winter-term parties, birthday gatherings, and Bowlin-bowling parties (please notice the pun) have left me with a group of friends that truly feels like a violin family—in fact, we share a Facebook page that is called “Bowlin Studio Family.” Leaving home and finding footing in a new community is never an easy task. But Oberlin is such an eclectic community, where appreciating and accepting everyone for who they want to be is a defining characteristic. As a proud member of Team Bowlin’s PPC (Party Planning Committee), I look forward to the many adventures to come!