Since most everyone who applied to Oberlin likely has gotten their decision back by now, I thought I would finally post about how I decided to come to Oberlin. I've written a bit on the subject before, but now that I've been enrolled at Oberlin for almost three full years, I figured it was time to tell the full story. It's not an easy story for me to tell - I was quite unhappy during many of the early chapters and I'm not done writing the later ones - but I figured it was worth a shot.

When I was a senior in high school I wanted to be an opera singer. I cared a lot about school, particularly my English, foreign language, and history classes, and I wanted to continue learning about those subjects in college, but my focus was on classical singing. Because of that I applied to a mixture of dual-degree programs and a few liberal arts schools with good musical opportunities. All in all I think I applied to four liberal arts schools and seven schools or pairs of schools where I could do a dual-degree or dual-degree-ish program. (This seemed like a reasonable amount of schools to apply to at the time, but it was not. Looking back I applied to way too many schools. If you have not applied to college yet, please learn from at least one of my mistakes and apply to a reasonable number.) One of these schools was Oberlin.

To be honest, I'm not sure when I first heard about Oberlin - I might've read about it in my AP US History textbook, which mentioned Oberlin as an early adopter of integration, or in a college mail out - but there's no question about when I considered Oberlin to be a serious option. Back in high school, my voice teacher was one of the most influential people in my life, so when she recommended Oberlin's voice program and its academics, I listened and started looking into the school.

It immediately became clear to me that few other places offered such strong music and academics, so Oberlin College and Conservatory shot to the top of my list. I started reading the Oberlin blogs, where I found people who were funny, passionate, and interesting - the kind of people that I wanted to go to school with. I visited - took a tour, met with admissions representatives from the con and college, and did a lesson with a professor. I decided that Oberlin was my top choice but applied RD because I needed to keep my financial options open.

In the winter I started getting responses from the conservatories - rejections mostly. I had only gotten auditions at two schools and Oberlin Conservatory wasn't one of them. I was crushed. Most of my life I had believed that my singing voice made me special. Singing was something that I felt I could be "the best" at and my friends, teachers, and occasionally even complete strangers didn't hesitate to tell me so. The fact that so many schools didn't want to hear more from me shook my self-esteem to the core. I still wanted to study music, but I at this point I had to question whether or not I'd be able to do it the way I wanted to.

Right before "normal" admissions season I remember one of my favorite teachers counseling my class that "the first rejection stings the most." Although I'm pretty sure I had gotten my first acceptance by that point, to Ithaca College School of Music, I was overcome by teenage angst and muttered, "no, the fifth was the worst." Of course she heard me and asked what I meant - long story short I ended up crying in class and telling everyone about my many rejections, which I had previously decided to keep relatively private. My teacher was remarkably cool about it, she even took me aside after class and was very comforting, but I have never been unhappier than I was during the winter and spring of my senior year of high school and that day in AP English was probably my lowest point.

Even then I hoped I'd be accepted to Oberlin, start my freshman year there as an English major, re-apply to the conservatory, and get in to the dual-degree program. As you might've gathered by now, that didn't happen. I was waitlisted at Oberlin College and another university, also half of a dual-degree program I didn't get in to. However, I was accepted at Ithaca College School of Music and Skidmore College. I decided that I would ask to be kept on the waitlist at Oberlin and accept the offer from Skidmore, where my high school voice teacher taught and I was up for a large music scholarship. Looking back, I can sincerely say that I made my peace with going to Skidmore, but I was still elated to be accepted to Oberlin in late spring. (If you're interested in how I got in to Oberlin off of the waitlist, check out my previous post on the subject here.) 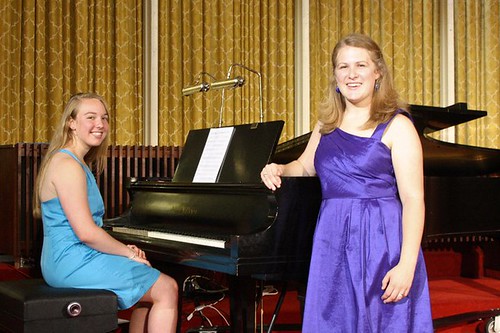 Me circa the late spring of my senior year, finally able to be happy after I got in to Oberlin. My mom took this (hilarious) photo after my senior recital, which I put on with my good friend (also named Emily), a pianist who went to Princeton intending to study classics and now studies music. Funny how the world works sometimes.

When I got to Oberlin, I started taking a mixture of classes in the college and conservatory, including private voice lessons and Treble Ensemble. All through my first semester, I intended to re-apply to the conservatory and finally become a double-degree student, but somewhere along the line, I realized that wasn't what I wanted anymore and decided to stick with being a student at the college. There are many small reasons I made the decision I did, most of which I find difficult to articulate, but the heart of it is that even though I still loved singing, my academic interests were becoming much more exciting to me than voice lessons.

Do I wonder what my life would be like if I had re-applied to the conservatory? Of course, especially when I go home, where most people still know me as "Emily, the singer." Do I ever think I made the wrong decision? Not really. I regret my decision so little, have changed so much, and have become so much happier since I made it that it's hard for me to make sense of the fact that I ever felt differently. If that doesn't show that I made the right choice, I don't know what does.

I do occasionally miss the sureness that I had when I thought I wanted to be an opera singer. I'm anything but sure about what I want to be now, but when I think about how much I love what I'm doing at the moment - majoring in comp lit, studying abroad - I know I did what was right for me, both by choosing not to re-apply for the double-degree program and by choosing to go to Oberlin in the first place. There are probably other colleges where I could've found out that I love comparative literature, but I doubt there are any other colleges where I could've done that while taking private voice lessons and singing in an amazing early music choir. The fact that Oberlin allows me to to take music and academics seriously, the very thing that attracted me to the school in the first place, is what still makes me glad that I'm a student here, even though I'm not exactly the type of student I originally wanted to be.

So to anyone struggling to make sense of recent rejections, don't despair - the awfulness of your college application process will have little to no bearing on the quality of your actual college experience. To anyone who didn't get into the conservatory, don't despair - take this time to look at your options and figure out another way forward. Most importantly, to anyone feeling a little lost, don't despair - in some ways I'm more lost than I was as a senior in high school, but I've never been happier with where I am, and that's the cheesy truth.