The idea of personal "Oberlin Tours" arose during a brainstorming session for the Social Media Exco (aka #SoMeXco) and although we ended up scrapping the idea for the particular project that we were working on, I thought I would create my own tour and put it into the form of blog post. I considered starting off this tour with some on-campus sites, but I thought that a tour of my favorite off-campus places would be a bit more interesting for you to read. (Want to see my on-campus tour? Let me know in the comments and I will make that happen.) 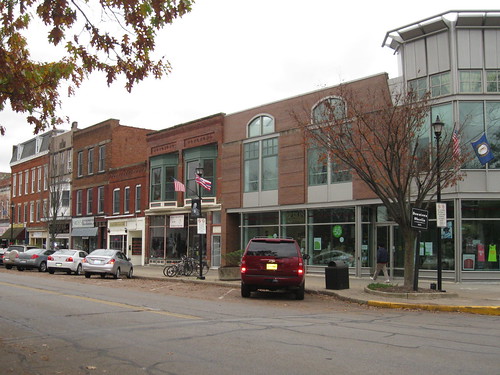 So without further ado, my tour begins at the edge of Tappan Square across from the college bookstore. If you cross the street and take a left, you'll arrive at our first stop, Smith's Knitshop, before you even know it. 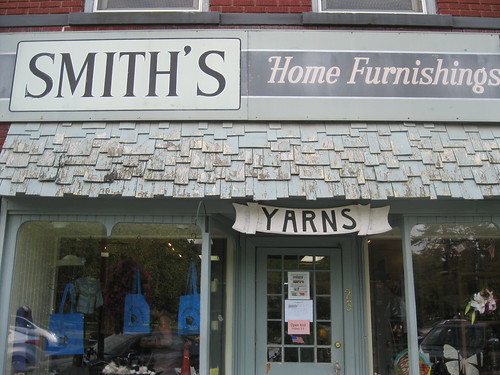 When I visited Oberlin for the first time, I was thrilled to discover the yarn shop just off of campus. It wasn't a deciding factor in my college choice, it was definitely a point in Oberlin's favor. As a student, I probably visit Smith's at least once a month, often just to look at/feel beautiful, soft yarn when I'm a little bit tense. Luckily, the staff doesn't seem to mind that I regularly come in without buying anything and when I do want to buy something, they're always very helpful and friendly. The store is also incredibly well stocked for its size, the owners almost always have extra yarn hidden on top of the shelves so it's a fine place to buy a sweater worth of yarn if you're so inclined. 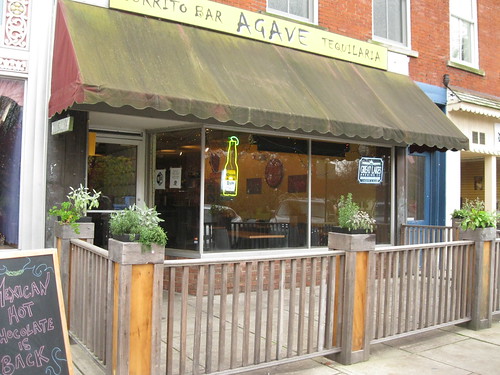 Just a few doors down is Agave Burrito Bar & Tequilaria. I get a craving for one of their delicious half-a-dillas or burritos at least once a week and even though I don't usually give in, I still go there pretty regularly. In fact, I wrote the first draft of this post around dinnertime and ended up heading to Agave rather than going to a dining hall. Such is the pull of a half-a-dilla and chips. 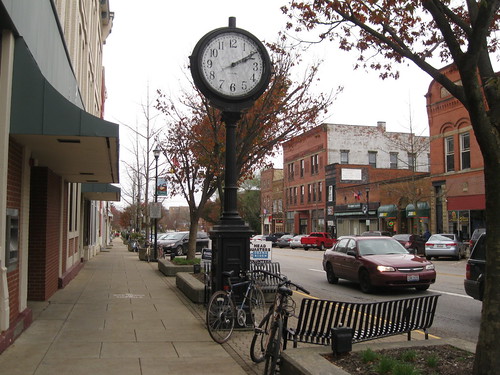 Next, head back out onto the sidewalk, cross the street at the first intersection and take a right. 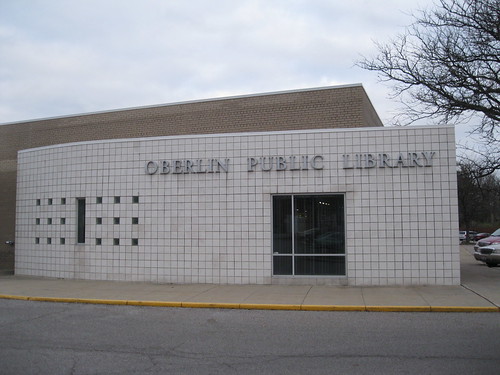 After a minute or two, you'll reach the Oberlin Public Library. It may seem a bit odd to put this on my tour since the college has a couple of great libraries exclusively for student use, but hear me out. As amazing as the college's libraries are, the selection of popular novels, DVDs, and CDs is pretty limited - that's where the public library comes in. Any student can get a free library card and have access to all of this: 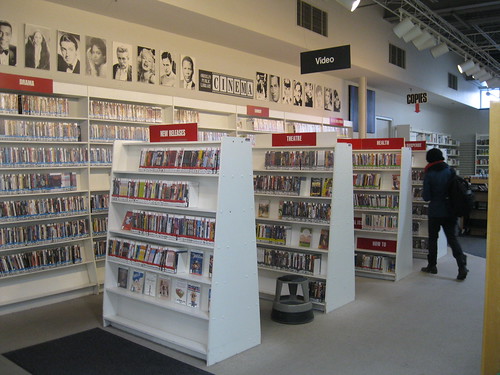 Guys, they have an entire section of DVDs that's just titled "British" that has gems such as the BBC Pride and Prejudice miniseries and EVERY SEASON of "Monarch of the Glen." I'm in love. 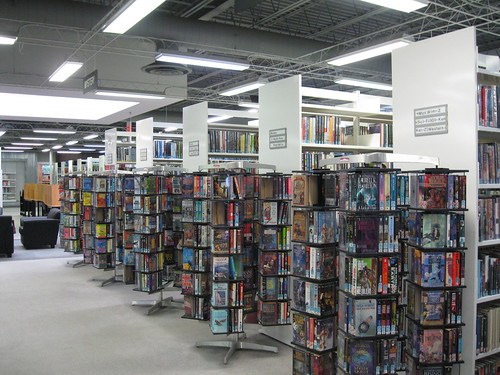 I don't have a ton of time to read books that aren't for class, but I've been trying to devote more of my free time to reading rather than just wasting time on the interwebs. The public library has made that so much easier. The librarians are very helpful (as librarians are wont to be) and there are a lot of comfy chairs and tables to work at, making it a great study locale. Also, this gorgeous, student-created mural is out back: 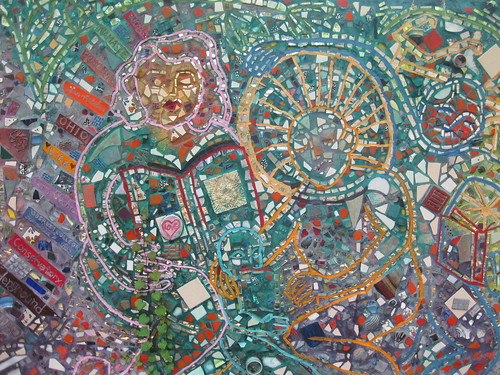 Ordinarily, I'd probably stop at Ratsy's and Ginko Gallery on this tour, but since Ruby and Mya covered these places so well recently, I will let you peruse their posts instead of writing about those places myself.

Now we'll head back towards Tappan and take a right at the next intersection because only a few doors down from the Apollo is my favorite place in Oberlin. Say it with me everyone, Slow Train. 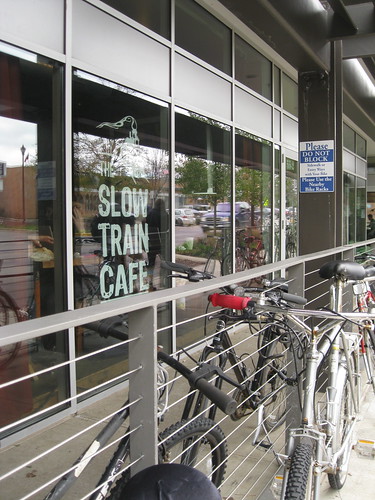 There are so many reasons to love Slow Train: excellent drinks and baked goods, helpful staff, playlists that consist mainly of pop and rock from the 90s/early 00s, plentiful seating, trivia night...1 I could go on. As you can probably tell, I spend a lot of time there. So much time in fact that my parents have questioned whether I spend time anywhere else. 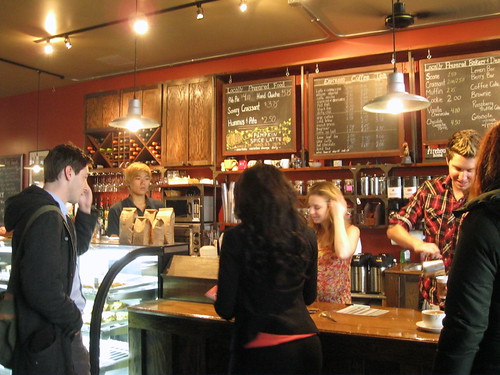 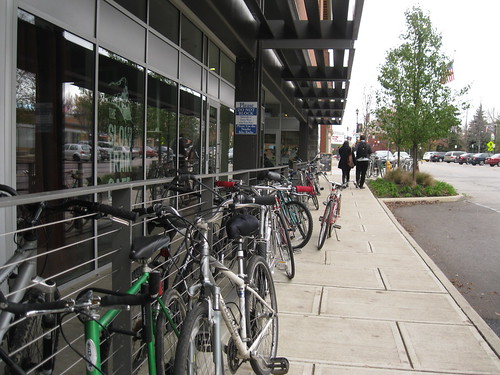 Once we've grabbed some albino squirrels to go, let's head back out in the direction we came from. This time, we'll head in the direction of the Allen, past the Bench By the Road, and into the residential area. 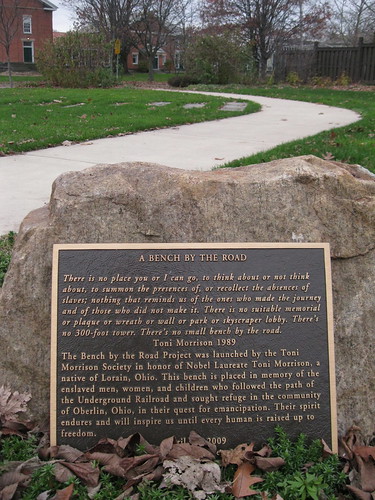 I don't feel comfortable posting a picture of their house or posting their address without asking them, but my final stop on the tour would be the Elkan residence aka the Oberlin Chabad House. Although I'm not Jewish myself, I go to Shabbat dinners at the Chabad House pretty regularly. Devorah and Shlomo are incredibly hospitable, not to mention that they're excellent cooks, and eating dinner with their family is an excellent, homey alternative to eating in the dining halls.

Thus ends my Oberlin tour. I'm sure that a lot of Obies are aghast that I left out their favorite place and to those Obies I pose the following question: what would you include in your "tour"? I hope that if anyone is reading this on Election Day, they've already gone out to vote!

1 Some friends and I recently got third place at trivia night. Even though there were only about seven or eight teams there that night, it was still one of my proudest Oberlin moments thus far.

Thanks for sharing. Pretty soon we hope see an online Virtual Tour of these and other Oberlin hotspots. Thanks for including the Bench by the Road; one of my favorite spots.

This is awesome! You know, because there are SO many great libraries on campus, I actually have never set foot in the Oberlin Public Library (and I'm a senior! so bad). This post has convinced me to change that!

I've also never been to the yarn shop... though I have no idea how to knit so I probably won't ever wind up there, not gonna lie! If I had to add anything to this tour, it would definitely be THE FEVE (actually, I could probably dedicate a whole post to Feve brunch, Feve happy hour, Feve tator tots, etc), and Cowhaus of course, because I'm obsessed with ice cream.

Remember that time when I copped to the fact that I read all the blogs?
Well, I'm trying to become a more active participant/commenter.
Great post! I'm so glad you let me on the secret that is Smith's! I've been looking for somewhere to get yarn to put in my dreads.
Also, I'm so glad someone loves Slow Train as much as I do! It's a money vacuum, but all the creamy goodness is so worth it!
The only other place I would have included is the Oberlin Community Center, which is super chill and does spectacular stuff for students and community members, but it's a bit farther off campus. Check it out sometime.