I've been a big fan of Stile Antico, an early music vocal ensemble, since late 2009, when I happened to be looking at iTunes' list of the year's best classical albums. Stile Antico's "Song of Songs" was in the top spot so I listened to the available samples of a few tracks. I was blown away and immediately purchased the album, a collection of Renaissance settings of the Song of Solomon. Back in 2009, Stile Antico was a relatively new player in early music, now the group is in their tenth year. They've released nine albums; been nominated for two Grammys; toured Europe, North America, and Australia; performed a Tiny Deck Concert for NPR's All Songs Considered; won a variety of awards; and as of last week, visited Oberlin to work with some of the members of Collegium Musicum.

The aforementioned Tiny Desk Concert - listen for the false relation1 around 8:55 and marvel at how cleanly they sing the 12-part piece, Hieronymus Praetorius' "Tota Pulchra Est."

Although it seems like they had fun while they were in town - the members of Stile keep a tour blog and had some particularly nice things to say about Oberlin - they didn't come all the way from England just to meet some students, rather Columbus was the last stop on their recent American tour. Collegium's conductor, Dr. Plank, asked them to stop by while they were in the area to do some educational outreach and they said yes.

Ultimately an alto and a tenor who also runs the group's social media accounts (this will be important later) came to give us a workshop in a lovely, sunny space in the main conservatory building. They began with a rundown of how they research and choose repertoire, set programs, obtain scores, and interpret the various texts and settings they end up working with. Unlike most choirs singing highly complicated polyphonic2 music, Stile doesn't have a conductor, so the singers have to work out all of these issues as a group. Apparently this leads to a lot of arguments during their rehearsals, but I'd imagine that it helps to keep the group's sound vital and interesting. After that, they worked with a small group of students from Collegium and answered some of our questions. One of the more interesting things I learned during this section of the workshop is that although Stile was formed by a group of friends at university, many of the members didn't study music as a part of their degrees. Although I can't see myself ever performing professionally, especially not at the level Stile does, it was inspiring to hear that you can still have and create musical opportunities in the wider, off-campus world.

The next day was the concert in Columbus. Not counting Dr. Plank, nine of us from Collegium decided to make the trip southward. My group - namely Zoë, Mariko, Natalie, and Rees, the driver - decided to meet up at 5:00 so that we'd have ample time to get to the venue in time for the pre-concert lecture at 7:30. Columbus is only two hours away, so this shouldn't have been a problem, but due to a road closure and a massive accident along the way, we made it to the venue with only a few minutes to spare. Luckily I still got a great seat and settled in to enjoy the program, "From the Imperial Court: Music from the House of Hapsburg."

Hearing Stile Antico, a group I've listened to and enjoyed for so long, in concert was nothing short of amazing - especially because they sing just as precisely and emotively live as they do on their recordings. Sure, mistakes happen in concerts that would never make the final cut of a CD, but every cut off was perfectly clean, no single voice ever stuck out from a multi-voice line, and overall I don't think I've ever heard a choir with better blend. Apparently my friends were similarly impressed, because some of them actually tried to get a look at Stile's scores after the concert had ended.

Aside from the glares my friends got for being nosy, I was struck by how friendly everyone in the group was. I'm normally the type to shy back in these sorts of situations, but maybe because I had already seen two of the singers the day before, I somehow found the courage to talk to quite a few of them. All of them mentioned how impressed they were with the Oberlin students and how happy they were that "team Oberlin" had showed up to the concert in force. The tenor who came to Oberlin talked rep with us - Collegium sings a lot of English music but a few of us would love to sing more pieces by Spanish or Flemish composers - and seemed pretty impressed by our level of Renaissance-nerdery. A soprano told me how nice it was to see so many young faces in the audience and wanted to hear about what I study at Oberlin. Plus, everyone I talked to was willing to sign my program. 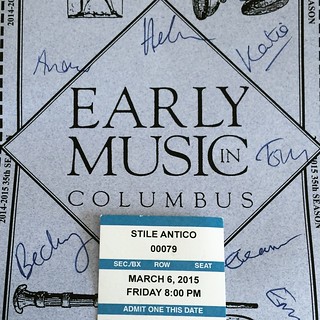 Afterward, "team Oberlin" got dinner at a Indian restaurant close to the venue. Hopped up from hunger and post-concert excitement, we proceeded to start tweeting @stileantico, having found out the previous day that they follow anyone who mentions them. Some of the social media highlights?

@wilkergirl: The Oberlin contingent is positively giddy after the @stileantico concert. Giddy enough to peek at their scores... 10:38 PM - March 6, 2015

I'd like to add that this was favorited by a member of the group and retweeted by @stileantico and their record label, @harmoniamundi. It also included the pictures I posted above.

@stileantico: Fun concert in Columbus this evening to close our US tour. Great to see team @OberlinCon out in force. Now for some serious business! #party
10:44 PM - March 6, 2015

This sort of thing might seem trivial, the tweets themselves probably are in the long run, but 10 years from now, I think that I will remember last week not just for the beautiful music, but for the lovely people who made the music. So often in situations like these, there are so many walls up between the concert-goer and the performer that you can feel like you're worlds apart even if you're in the same room. Instead, I'm lucky enough that I got to make brief, human connections with people who make music I adore - thanks to the power of Oberlin and twitter.

1I figured some definitions of musical terms might be useful for any non-musicians reading this post. (Hi mom and dad.) A false relation is a type of dissonance, a technical term for when two or more notes sound like they "clash," that occurs in polyphonic music from the Renaissance. Practically, this means that two voices are singing notes only a half step apart either simultaneously or in close proximity in one another. This can lead to melodic lines that sound "wrong" if you're not used to them and they are very difficult to sing in tune, but Renaissance composers liked to use them to convey great emotion or expressiveness.

2 Polyphony is a musical texture made up of multiple melodic lines. In vocal music, this usually means that each vocal line sings the same words (or sometimes different words) at different rhythms. As you can probably imagine, this sort of music is often quite difficult to sing cleanly and perfectly in time.

3 "Ut sol" means "like the sun" in ecclesiastical Latin, but the syllables "ut" and "sol" also happened to be used for the solfege syllables "do" and "so" during the Renaissance. One of the pieces on Stile's set made a pun out of this by jumping from do to sol to do on the words "ut sol."