Oberlin is a small town. A lovely, charming town, but a small town nevertheless. And sometimes, it's great to just get out of town. Thus: Spring break in Mammoth Cave!

Our Heroes: Yoshi, Erika, Andrew, Iris and I
Our Place: Kentucky, Mammoth Cave and Louisville
Our Enemies: Winter, rain, nighttime.

Highlights of Our Adventure:

Mammoth. Mammoth Cave is the world's longest cave. Its held a tuberculosis hospital, a Methodist church, saltpetre (an element of gunpowder) and millions of tourists. We took two tours of the cave - a total of five hours underground. One tour guide was amazing: Jo Duvall had been working in the cave since the '60s and knew everything about everything. When President Reagan visited the cave, he talked to Jo to get information for his soundbites. He was a self-identified hillbilly with the articulation of a college professor.

The other tour guide was less amazing, but did have a great sense of humor. When we entered a wet portion of the cave and started seeing stalactites and stalagmites in formation, he explained, "When stalagmites and stalactites conjoin, we call them columns. Some people call them pillars, but I'm a Kentucky man, so pillars are what I sleep on."

We camped out about 10 minutes away from the main cave entrance. Our tent and a bunch of our supplies came courtesy of the Outing Club. Outing Club is so cool - they give free camping funds for food and gas, as well as backpacks, tarps, tents and anything you need for a week/weekend away from school. They've sponsored trips to the Rockies, the Adirondacks and places near and far from the college.

Team Family. Our second tour of Mammoth Cave was a lantern tour - we were given one lantern per family. Given we weren't a family, but yet we were a group, we bunched together and declared ourselves Team Family™.

Friendliness aside, groups take a while to bond. I'd never hung out with Erika, Andrew or Iris before for a long period of time. There's an easy way to tell when an Oberlin group bonds (cite: Yoshi) - it's when we all say we're from Ohio. Decisively. For the first day or so, the "Where are y'all from?" question yields... "Ohio, but-" "California" "Texas" "Wisconsin" "Pennsylvania, by Philly" "California, then New York."

After another day, we are from "Ohio." No ifs, ands, or buts. 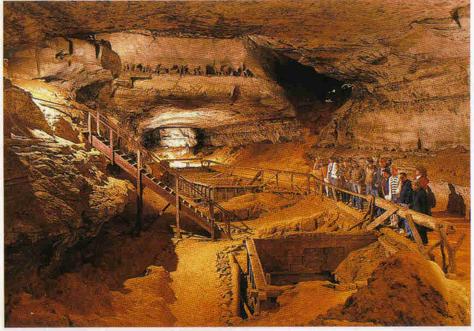 Delicious food. The benefit of going camping with co-opers is that they can cook like nobody's business. With excessive amounts of rice, pasta, potatoes, mushrooms, garlic, olive oil and mozzarella as bases, Erika/Andrew/Iris made some pretty incredible food. Also, there was much less snacking than other road trips I'd been on. The focus was much more on meals and eating together.

Flutes. Andrew, a double-degree classical saxophone/anthropology major, was playing in the pit band for Reefer Madness. Though he has very little flute training, they wanted him to play a specific line from Peer Gynt for the show. So, he needed to learn flute in two weeks. Who better to teach him than Erika? Apparently, Erika played classical flute for over a decade. So, each morning, as breakfast cooked away, Erika would teach Andrew how to relax his embouchure and play gorgeous music. It was amazing to watch how fast Andrew learned the instrument and how well Erika taught it.

Badass Hiking. I am virulently afraid of falling - I have trouble with any sport involving mountains. I love hiking, though, as long as the paths don't try to kill me. On our first real day, we went hiking, in search of the river. An ice storm had ripped through the parkland in late January and had felled thousands of trees and blocked off a number of roads. As a result, we had to take a more circuitous path to get to the river - a windy little path past tiny waterfalls and giant downed trees. Andrew found a tick on his leg, but the rest of us escaped (I hope). While there were hundreds of birds near the campground, we didn't hear so much as a peep up in the hills. Just miles and miles of woods.

Late March is not the gorgeous time in KY - it's still winter, there's not so much green. But there was gold. Some of the trees held little golden leaves that make a whooshing sound in the wind, similar to rain. It reminded me of the wobbly-headed tree spirits (kodama) in Princess Mononoke. 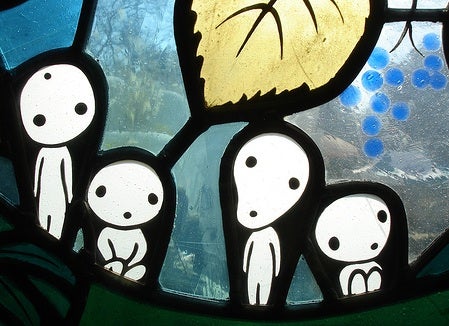 Kodama! Keep reading, it gets cooler.

After a while, we got a bit bored of this. We couldn't see the river, but according to the map, it was all around us. We went off the trail, which meant a sliding descent.

Given my violent acrophobia, this excellent idea turned uncomfortable very fast. Fear is a somatic emotion - I can feel my heart speed up, sweat pour, and a redness settle over my face. My voice becomes harsher, stomach acid sloshes around my gut. I wanted to be alone. I stared at the river for a few minutes. It was a shining aquamarine, gorgeous and clean.

However, it turned out that Erika was also afraid of heights. After a few minutes of descent, we crawled up to the trail.

Below us, the trio kept going: Iris and Andrew are rock-climbing geniuses and Yoshi has massive upper body strength. We could hear their voices, but not what they said. After about 15 minutes, they rejoined us on the trail, Andrew looking sheepish.

"What happened?" Erika asked. "Did you get to the river?"

"No. Andrew did something really stupid - " Iris said.

"For the sake of testosterone, can we replace stupid with badass?" Andrew interjected.

Andrew had been climbing and saw a steep drop a few steps ahead of him. Aloud, he said, "This will be so much easier if I drop my bag down first."

After dropping the bag and hearing the smack a few minutes later, he said, "Shit. Guys? I need to get my bag back."

So Andrew jumped down and found he had no way to get back up the sheer cliff. There were a few minutes of frustration.

In order to retrieve Andrew, Iris gripped onto a tree, Yoshi hung onto one of her legs, and Andrew climbed up their human ladder.

Iris. I didn't know Iris at all, before this trip. But over the days, I started to really enjoy her company. She's from Madison, Wisconsin, and is a life-long co-oper. When she was younger, she lived in a family-focused cooperative and grew up in a much larger family than most other people. We talked about co-ops a lot; I'm thinking of trying to live in one after I graduate for cost/community purposes.

Iris was a founding member of After Midnight, Oberlin's only coed a capella group that sings jazz standards. Whenever Iris or Andrew sat next to each other in the car, they would practice "Lush Life," one of the saddest ballads of all time. Gorgeousness. Iris also had some of the most insane camping stories of going out to odd little islands in Wisconsin to see gorgeous lakes and climb giant rocks. She's also one of the most cheerful, strangely ethereal people I've met -- someone who doesn't get brought down by the little things. 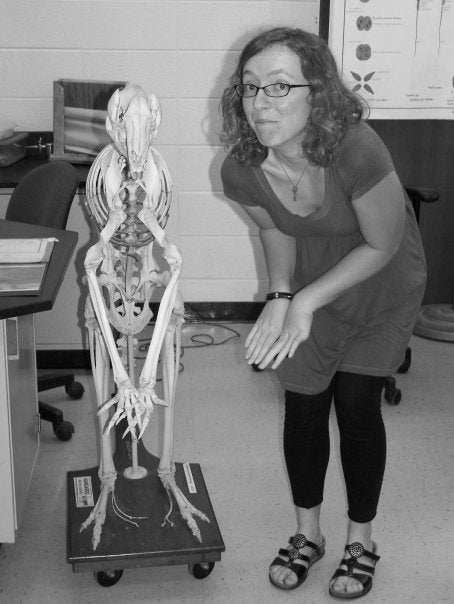 Iris wants to save humanity from becoming extinct. Like this guy to her left.

Yoshi. You know all about Yoshi, gentle viewers. He's my favorite person. On the second day, when he was driving, turkeys attacked the car. Yoshi was terrified. Whenever he drove after that, we pantomimed turkeys, playing into his gobbler-trauma. Though he hadn't gone camping as much as he'd like to, being outside of the school-world is good for him. When we told stories by the fire, I really loved to hear his. I know most of them, but he's a really skilled speaker, so it just gets better and better. He's really good at pausing. 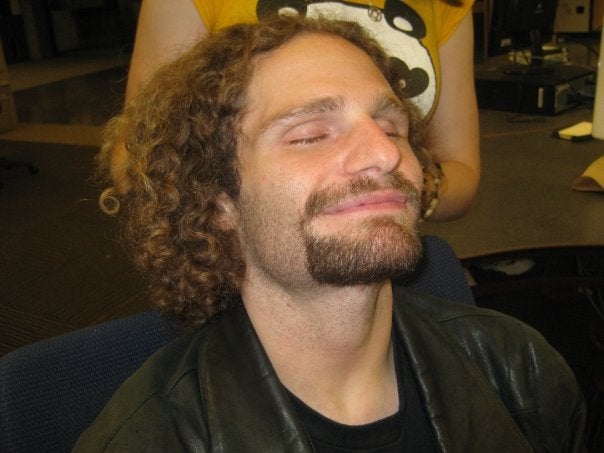 Sleeping Yoshi is unaware of the panda about to devour him.

Andrew. I met Andrew as my co-lead for a play that Erika's girlfriend Sarah wrote for David Walker's Playwriting class. We portrayed wanna-be cultists who would do whatever it takes to get into "The Order." Andrew's character kicked the snot out of me while I creepily insisted that he do it. It was so much fun. But that show was at the end of the semester, so we never got a chance to hang out. (Also, I had a gigantic crush on him at the time so I found it difficult to speak in full sentences when he was around.) We did a lot of singing along in the car to Cake songs. Andrew was also a super-mega-tastic outdoorsman. He worked at a nature camp for seven years and thus knows all the less-dangerous ways to have an excellent time. He knows the dangerous ways too, but sometimes keeps mum on them.

And he speaks Czech. This boy is too hardcore. 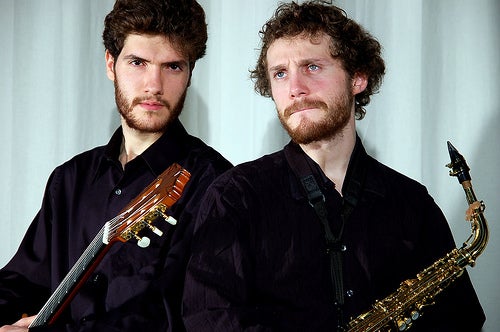 Erika. Erika's been composing/playing for circus for as long as I've been around, but as a double-degree student, she's been busy. This year, she's sharing a house with Liz Hibbard, one of my favorite people in the world. Despite her practicing five hours a day, I get to see her more often when I chill in her house. This is excellent, as Erika is simultaneously chill and focused. She's got the easygoing Bay Area feel (her parents are Japanese hippies) but the ambition of a pianist. She's also endlessly curious, charming and considerate. We spoke about environmental politics for a while and I found out that Erika went to MLK Jr. Middle School, Alice Water's Edible Schoolyard. I've read about her middle school in academic papers on sustainability. Craziness. Also, as a shout-out to the project, she's working on urban food sustainability and wants to work in that field after college. Pay it forwards? 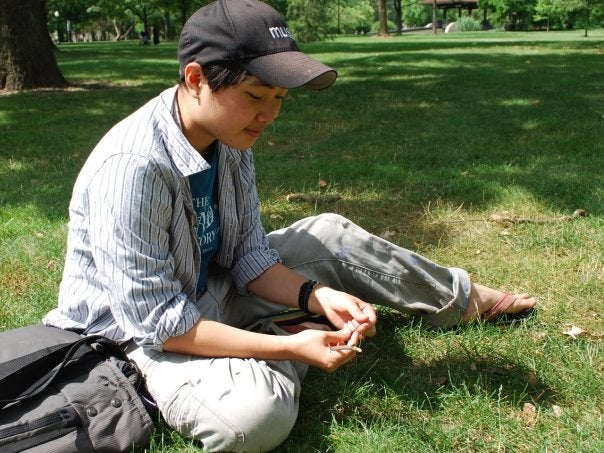 Ahhh! It has been over two years since I was fortunate enough to hike and camp around Mammoth Cave National Park with Erika and a sundry bunch of Obies. Sounds like it was a delightful time. Ohio is lucky to be situated where it is, within completely reasonable driving distance of so many beautiful parts of the country. This, from someone who just drove straight from Key West, Florida to Oberlin over the course of the last two days, hehe...hey, it's possible. Then again, I guess most places on this continent are within driving distance, if you've got the time! Hooray for spring break.

Also, the story of rock-climbing is so wonderfully described. I like this story very very much

Hi ,I was wondering if I could use your photo of Mamoth Cave only, for a project I,am doing for a customer of mine.ED

Hm. By rights, it's not my photo, I poached it off the internet. So, I don't think I could say yes, as it's not mine. As I'm not publishing this blog for money, I didn't feel the need to actively pursue a credit. If I were using the shot for publicity, it might be a bit different.

The world under the surface of the planet is totally incredible.

Have delved into a number of caves in Australia (no spelunker by any means) and have loved it all.