I've started running a lot of miles again this cross country season. That feels good, since I haven't been able to run as much for the last year due to a string of injuries. I suppose running really is pointless, isn't it? At least the people on the treadmills aren't deluding themselves. They know that they're going to end up right back where they started, sweaty and out of breath. We just like to get dirty and almost run over when we do it, too. We like to cover some ground before we stop, exactly in the spot where we started, and say 'good run' to everybody else. But we have to look good when we go down to Panama Beach every Spring Break. C'est la vie. This is dedicated to those hard-bodied individuals I spend so much time with:

Editor's note: Confessions, Part 1: I wrote most of this after a long run a few Sundays ago. Any references to 'yesterday' and 'last week' are titanically inaccurate. Confessions, Part 2: is an awesome song. How did I forget about that song?

I went on a long run alone today (NOT today, see ed. note). 5 and a half miles out on the bike path and back. I never really mind running alone, I certainly don't get bored or anything. It's just nice (Arrg! Don't you hate the word 'nice'? But it is nice...) to be quiet and sweat for about an hour and a half by myself. After a run like that, even when it isn't particularly hot, you get a thin crust of salt from sweat over your entire body. A layer of sticky something forms on your lips. The state of your running shorts is intolerable. And yet, the best descriptor I can find for how I feel after a long run is 'clean.' I feel like all of my bodily processes have cycled twice over, like I have a new layer of skin cells and my glands are all flushed out. Breathing is full and satisfying. I know that I sing a lot better after a long run. I love it.

Last week (LIES!) I went to Carlisle, a nature preserve/ equestrian exercise area/ 12 mile loop, with Derek, Will, and a couple of other guys and saw all the pretty leaves turning yellow. We talked about parties that had happened recently, chatted about girls, exchanged fart jokes, and got sweaty together. It's nice (Grrrrrr...) to have a testosto-run every once in a while, too. I love them. I smell even worse after a run like this for all the macho I've gone through, and still-- I feel clean. And I love it.

And I know I wouldn't have runs anywhere near as satisfying if I wasn't a part of what is most definitely the hottest team on campus, the Oberlin Cross Country team.

What else I love about OCXC: 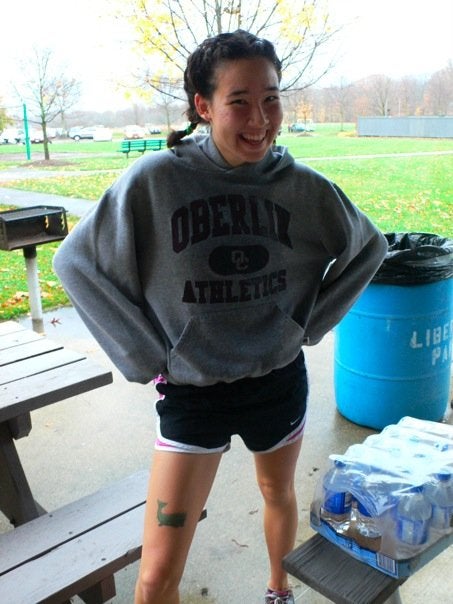 Of course, the team is always there when you ask for help. When I had to switch dorm rooms in the span of two hours last commencement week, I sent out a team-wide email asking for help and found two cars immediately at my disposal, making the move a cinch. But last March, right around the 21st, I was having a truly shitty week. I was feeling guilty, sad, tired, and overwhelmed. This time, I didn't ask for help at all. Some of the stuff I was going through was pretty personal and I also was just not in a friendly sharing mood most of the time. I'm sure that had I asked for support then, I would have had more of it than I could imagine in the form of friendly chats, hugs, and probably some baked goods (certain members of the team are great about bringing out banana nut bread when you need it most). Again, I didn't tell anybody what I was going through, but still, something great happened. Going to practice every day that week, I noticed that I felt better, without anyone acting differently than they did the other 95% of the year. Everyone was so friendly, smiley, and good to each other that they brought me out from feeling gloomy and sorry for myself. 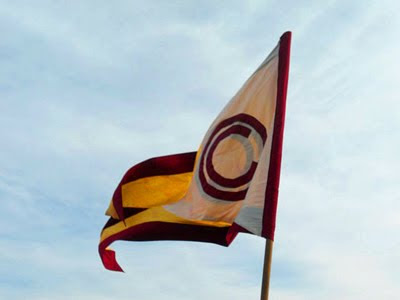 Thanks, guys and gals.

Hey Joe!!! this is a good post. Now I feel better about waiting this long to read a post. Good job ol boy!

Love the love letter! You pretty much summed up my feelings towards the XC team.. I would add to my list of loves:
-matt bernstein's Simba story
-falling asleep on Aviva's shoulder on the bus ride home, always
-ZOMBIE
-that photo of sara-tera above
the list could go on... thanks for writing this! :)

So glad I made the list!
Thanks Joe!
love
Constie-cann't

MAY I GO TO HOLIDAZZLE???

Joe, I couldn't agree more!
And now we will be the warm fuzzy center of the track team.
OCXC...mmmmm

Inspiring read on running, mister! I would also like to go to said party. Maybe Genvieve and I will (not so secretly now) crash it.