As I’ve grown older around more and more Obies, I find that we create family units. They’re not the classic 1950s nuclear family, but we have an underlying net of caring that one would recognize immediately as a close-knit circle of love. While the outside world may not always think of these individuals as connected, the members within the family complement each other in small and beautiful ways.

I refer to my Oberlin family often. They are the people I create holiday traditions with, turn to when I’m stressed, cook for and with, play games with late into the night, get in silly adoring cuddle puddles with them, and expect nothing but the same from them in return. We laugh together, cry together, and get through hard and easy times together. If we could, we’d climb into a covered wagon, ford a river, and just give up playing if any of us just up and died of dysentery.

One of my Oberlin families and I decided to celebrate our togetherness by sending out a holiday card this year (well, it was prompted by Naomi but was quickly embraced by the rest of us). Harris and I have lived together for many months now (for the past year and a half in Delightful House) and Ben — my actual family — and Naomi — who adopted Harris and myself as Hannukah parents sometime last year — lived together this past fall in South (there was a sign on their door that said the auxiliary offices of Delightful House), so it seemed only natural that our collective selves create a card. It would be sent to the the people we loved and that loved us back.

Before things get too heart-felt and serious and mushy-gushy up here in the Oberlin blogs, let me show you the photo that was on the cover of this card: 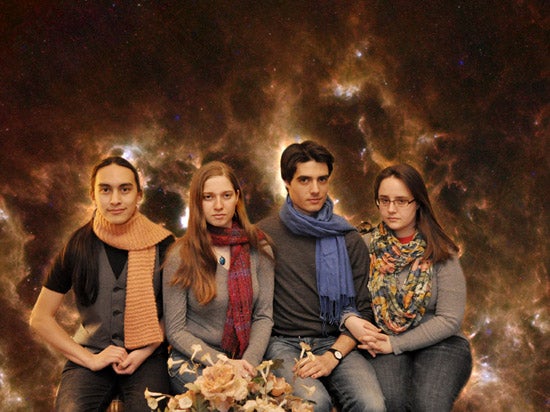 Many thanks to Midge and Smith Brittingham for the use of their living room, Lily Pratt ‘14 for her camera-clicking skillz, and NASA for their insanely awesome technology that allowed us to move the Brittinghams’ house into space for this photo.

And if that didn’t crack you up yet, let me share with you the interior of our card:

Just over one year ago, after several years of halfhearted attempts, Harris finally graduated from Oberlin College, a small, notoriously radical non-university located in northeast Ohio. Immediately upon graduation he took up employment in Oberlin’s Office of Communications, where he has a job title with too many U’s in it and for which he employs students to do menial tasks for low wages. His diet this year consisted mostly of cheese and starch, but as a new year’s resolution, he has determined to eat a carrot instead when the urge to eat something salty and fatty strikes him. He lives across the kitchen from the elder Plaut sibling. Occasionally they meet in the middle, around the toaster oven. In his spare time he trudges through Infinite Jest, reads young adult novels aloud, plays artistically disturbing video games, engages in a hobby of increasingly mediocre photography, and splits atoms by hand—a process of his own invention, which requires only a pair of needle nose pliers, dryer lint, and a shot of fine bourbon.

Naomi is in her second year at Oberlin College, a private liberal arts institution in the American Heartland where she is majoring in Mathematics and minoring in Computer Science. She is working both as a tour guide and for the UI/UX Developer in the Office of Communications. Last semester she was a Food Safety Coordinator in her co-op, so she knows all about health code, and in October she was the first female American astronaut with an interest in education to land on Neptune. This semester she is organizing a workshop for the swing dance club, and another side project, bringing about world peace, is expected to be completed by mid-2013. She lives in the inner room of South 363, which she does occasionally clean, with Lawrence Ferdinand, her stuffed octopus; Friend, who is probably some sort of daffodil; and her pet dinosaur, who prefers not to be named.

Ben is majoring in Neuroscience at Oberlin College, a bastion of yippie theology and blasphemy somewhere on the mainland. He spends all of his time with short persons and bicycles, and this semester lived with one medium person and three four bicycles and one guitar and twelve penguins in the outer chambers of South 363. In the fall semester, Ben embarked on a journey of existential non-self-discovery, developing a computational model for the relation between string theory, two stroke engines, and jazz ensembles. Ben’s journey ended in South 303, the new home base for all of his future criminal and philanthropic activities. This year’s harvest of souls was especially rewarding for Ben, who reaped a high score of 4.7 (SI), margin of terror 0.6, using his favourite aids: a mint flavoured toothpick, a #2 Phillips head screwdriver (ratcheted), and a flask of distilled superstition.

Ma’ayan is working as the SMC at Oberlin College, Woodstock’s older stepsibling with a penchant for chickpeas with hot sauce and homemade tofu. What’s an SMC, you ask? A Smile-Making Communicator, that’s what! She makes people smile and talk every day about Oberlin on all their social media channels. She blogs far too much, creates digital sandwiches, and she vowed to take at least one photograph a day in 2012. She resides in Hotel Delightful, the residence of choice for many weary travelers, and lounges in the shade of the stack of cookbooks on her desk in the evening. She has a new pet squirrel, Albus, who has several excellent hats and hand-knitted scarves. She also discovered how to turn lead into gold, which has had hidden benefits in the painting community, as she can now gild old houses at the touch of her finger.

See what I mean? We’re a collective group of hilarity. (To see this card in beautifully designed digital form, head over here.)

And because you, dear blog readers, are here, and at this point you probably can’t get enough of us, here are some outtakes from our photoshoot: 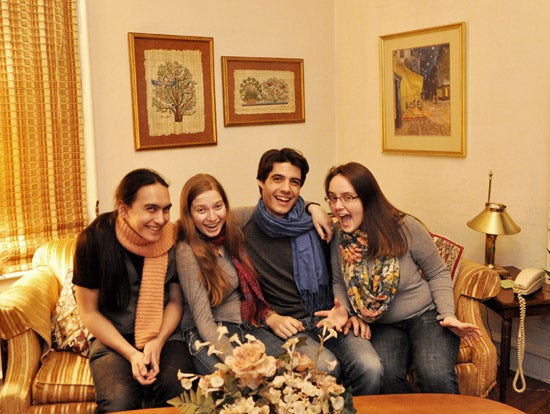 I think our prompt here was “Look excited!” Results: see above. 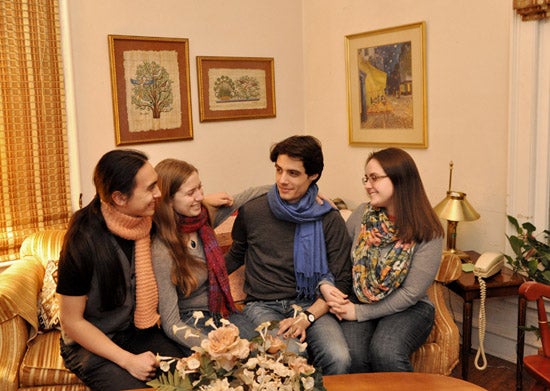 A naturalistic moment — we’re pondering what our next pose should be. 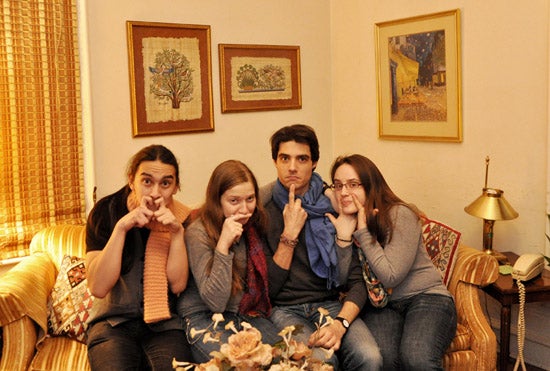 Here we are, playing the facial hair game. Don’t know what that is? OH BOY. It is my favorite game. Ask me about it in the comments. 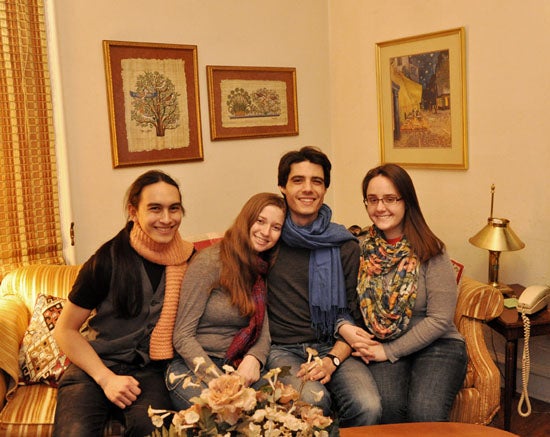 I love this photo and wanted it to be our cover image. I got outvoted, though, and this ended up on the back of our card. Sometimes family is about making concessions.

And there you have it. When we get together, our love and ridiculousness is so dangerously infectious you should take heed when you enter a room with the four of us — which happens at least once a week at Midge and Smith’s Sunday dinner but sadly not much more than that, because in true Oberlin family form, we are all busy busy bees. Happy Valentine’s Day, from my lovely fambly to yours.

I love my fambly.

I LOVE THE FACIAL HAIR GAME. AND ALSO YOU. COLLECTIVELY.

Curse you, Harris, I thought I was going to get first comment!

All of the above.

You guys are just too adorable! :3

Love! My roommate and I made family christmas cards/photos, but then snapfish took a really long time to ship them so they're still sitting undelivered on my desk...

So many of my favorite people on one card! Delightful, indeed.

And, because someone's got to ask... what is the facial hair game?

Are the scarves some kind of Doctor Who reference? :)

@All you lovely folks who love us - We love you too. But you already knew that because you read this post!

@Silvia - It's never too late. We sent our holiday cards last week :P

@Eli - OH BOY MY FAVORITE GAME. So. You get a group of people. I usually play it as an ice breaker in a group of people where I don't know everyone because it makes everyone giggle and then it is easier to talk to everyone because you've laughed together. You explain the rules, which are as follows: I will say "1, 2, 3, FACIAL HAIR." When I'm done saying the word "FACIAL HAIR," everyone should put their hands to their face in their favorite form of facial hair. Then you look around and see whose is the best. Usually the game falls apart at this point because everyone starts laughing and then everyone wins. And then you play! And then you laugh! And then you win!

@Ruby - While it wasn't intentional — we decided to all wear grey and a different colored scarf — let's just say that yes, that is *exactly* what we were going for.

Hey, don't you have a picture of your first delightful (or otherwise) family from the summer? You have the only family picture somewhere in your camera!
We will have to take another in a couple of weeks. I can't wait!

@Imma - Yes, you are my first delightful family, and yes, I have the photo of us from the summer on my computer. Pester me more when you're here :)