This post began when I got a letter from 12 years ago in the mail last week. I should have gotten it eight years ago, but things got a little lost along the way. But then, found.

I received this message on Facebook the first week of June.

This is your freshman English teacher from BGHS... I just found your letter that you wrote to yourself to be opened your senior year. I'd love to send it to you if you would send me your snail mail.

I answered immediately with an emphatic YES. You see, this English teacher was great. She gave me my first copy of Strunk and White's Elements of Style, which I still have on my bookshelf to this day. She served as one of my teacher recommendations on my college application, because after switching high schools three times, she was the only one I had kept up with and she understood where I hoped to go with my life. And she also had this fabulous assignment: spend a class period during the final weeks of your freshman year of high school writing a letter to be sent to your graduating self during your senior year of high school.

The only problem was that in all my movings throughout the years, my home address on the envelope was no longer accurate. But through the glory of social media, she and I found each other as Facebook friends, and now, this written letter passed its way through the postal service and through time to my home in Oberlin.

I won't bore you with every word from my seven-page handwritten (wow, handwritten) letter on lined looseleaf notebook paper, though I will be sharing some observations about myself AND answer many of the questions I very specifically (rather than rhetorically — which, by the way, I asked a lot of and yes, I did already know what rhetorical meant) asked myself in the final three pages of the letter.

Some themes that came up in this letter that still come up today, which I'm going to write back to myself in a similar reflection as I projected in my letter:

Every year changes your life. (Actual quote from my letter: "Freshman year was the year that changed your life. You became a new person.") If you'd written this same letter every year since your freshman year of high school, you probably would have written that same sentence. Probably means you're doing something right!

You ask a lot of questions. No one is surprised by this, definitely you. Keep on asking them.

You're a community organizer and trendsetter. (Especially when it comes to food.) You convinced many of your friends to start bringing their lunches during your first year. (I still do this now. I started making jar salads for lunch, tweeting photos of it with the hashtag I helped create for food-related conversations — #foodhat!! — and a small group of friends have started doing the same now, too.)

You're a good writer. You can tell a good story and you even use pictures to help strengthen your words (I drew a picture of my lunch table to talk about the friends I'd made that year). You're even pretty decent at organizing your thoughts, which is actually more amazing then than now because when you handwrite stuff, you have to think in a more organized way. (Totally not like this blog post; I started thinking about another section just now, popped down and wrote it, then came back up here to continue this thought.) You're still making silly typos, though: forgetting letters in the middle of basic words, like "brining" instead of "bringing" — you know, your typical brain moving faster than hands syndrome.

Your people come and go. Sigh. You wish this weren't the case, but it is, especially when you're the one who was on the move for most of it. All the people you mentioned in your letter have fallen away into their own lives, ones that pop up every so often on Facebook in the form of photographs or likes on your life changes. This is still the case, and that's okay. Because...

You're resilient. You had no idea how much more shifting would happen during the rest of high school when you wrote this, but this letter indicated that you had a strong foundation and that you could do anything.

You're creative. First of all, you embellished your name on the outside of the letter beautifully! You also totally forgot about this until reading this letter, but turns out that you starred in one of your first movies in this English class, and also started rewriting Shakespeare as if you were a member of Monty Python. 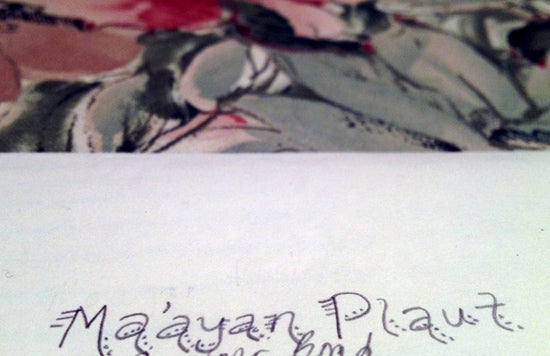 Look at me trying to be all fancy!

You're kind. Your stories and your questions to yourself in this letter show a consideration toward the people around you and compassion toward those who help you.

Awww. You thought that was sappy? We haven't even gotten to the best part of the letter yet.

I asked my future self some great questions. You want to know what 14-year-old me was thinking, don't you?! YOU DO I KNOW YOU DO (from the moment I knew this letter was headed to me, I did, and let me tell you, you're invited to laugh along with me because I fell into fits of giggles at my dining room table reading this and my brother can vouch for this fact). 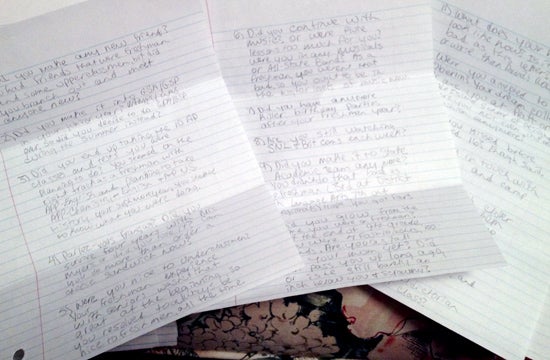 My terrible handwriting. Also that's three pages of questions, everyone.

I would be remiss to not share my last words of my letter to myself, and to the rest of you all: 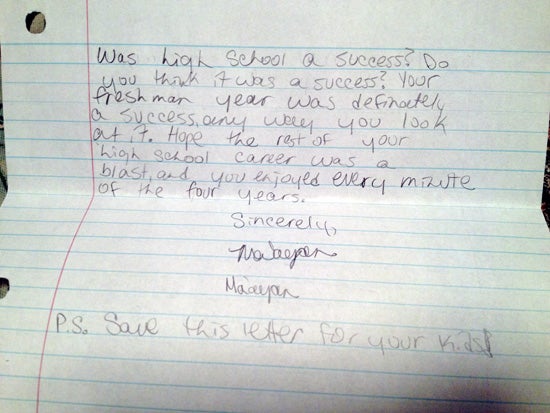 Was high school a success? Do you think it was a success? Your freshman year was definitely a success, any way you look at it. Hope the rest of your high school career was a blast, and you enjoyed every minute of the four years.

You know, I'm glad high school is behind me and I don't have to go back there again (I'm sure many of you have or will soon feel this way too), but to look back at what I hoped for and what I did in fact achieve: cool. I knew myself (or at least the start of myself), I knew I would grow, and I knew I would continue to explore. And for that, yes, I would deem high school, at all of my campuses, to be a great success.

To those of you out there about to enter your final year of high school, or on the verge of starting your first year of college: I highly recommend this written (really written, not just typed) exercise. Write yourself a list of experiences and goals, and revisit it in a few years down the road. As I wrote in my post script: "Save this letter for your kids!!" but really, this letter was a great way to look back — and forward — to the Ma'ayan I was and the Ma'ayan I wish to become.