It's common practice for college seniors to make a list of things they'd like to do in the year before they graduate. I intended to make this sort of list in the fall, but between readjusting to living in the US, having to go to the emergency room during the first week of school, planning for my future, and doing my homework, I got a little too busy/depressed/anxious to make that happen. During winter term, though, I finally started thinking about what I'd like to do during my last semester at Oberlin. What follows is my (abbreviated) Last Semester Bucket List, including five things I ended up doing and two I didn't. For your benefit I've ignored some of the sillier or more obvious items (ex. go on the roof of a building I'm not supposed to go on the roof of and finish my capstone) and explained why I wanted to do each thing:

1. Eat brunch at the Feve
Feve Brunch is an Oberlin tradition with its own rituals and customs: checking and re-checking the Feve's website until their weekly brunch menu has been posted, debating which special menu item you'll order, lining up to get a table with whatever group of friends you could convince to wake up early enough. Yet somehow I had never taken part in it until this semester, when I went twice. Although I don't see how people can afford to eat at the Feve regularly, I definitely get why people make such a big deal of Feve brunch. The menu items are creative and delicious, the atmosphere is good, and it's fun to take part in a tradition.

2. Splitch
If anything, Splitchers is an even more beloved Oberlin tradition than Feve brunch, probably because it's cheaper and involves a lot more alcohol. As I said in my last post, Splitchers (slices and pitchers at the Sco every Wednesday night) is not my scene during the school year. I like dancing and I'm not averse to cheap beer, but going out on a weekday never really seemed feasible for me. Even so, I decided that it was something I should at least try, just to experience a much talked-about part of Oberlin life. So when commencement week came around, I pre-gamed, I splitched, I conquered felt really tired the next morning. 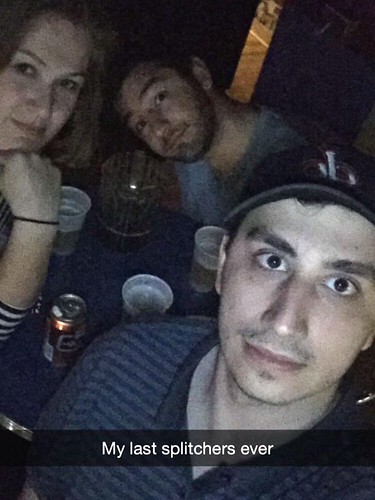 Jeremy, Conor and I at Splitchers (Is it weird to post a snapchat to my blog? Hopefully not because this is not the only snapchat in this post. It is however the only one from an account other than mine).

3. Go on an Oberlin Heritage Center Tour
One of the classic Oberlin courses that I regret not ever taking is called Oberlin History as American History. I figured, though, that if I couldn't take the class, going on a tour by the Oberlin Heritage Center would be the next best thing. Luckily, my family was interested in doing just that when they visited for commencement. We actually ended up going on two tours, called the Oberlin Origins Tour and the Freedom's Friends Underground Railroad and Abolition History Walk respectively. The first tour was all inside the history center itself, but the second took us from First Church, on the edge of north campus, all the way to where I lived during my fourth year, south of downtown. The latter tour was really thought-provoking. The guide was good at getting our group, my family and some 15 alums, to ask some of the questions slaves trying to escape to freedom would've had to ask themselves - when would we escape? Who would we trust? Where would we settle down? A particularly special moment was when we stopped in front of the MLK memorial and an alumna told us that she was friends with some of the Obies who used their winter term in the early 80s to walk a route on the Underground Railroad. 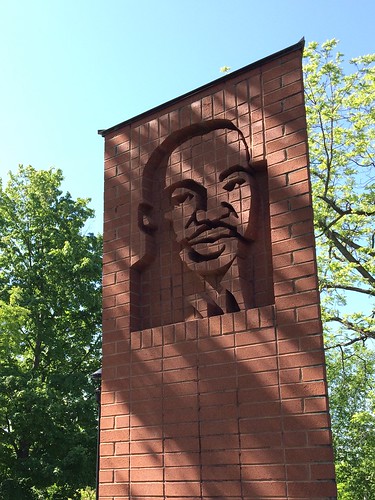 If you're an incoming Oberlin student, I'd highly recommend getting a group of friends together and going on a tour during your freshman year, or maybe waiting to do one during commencement week so you can share the experience with alumni. 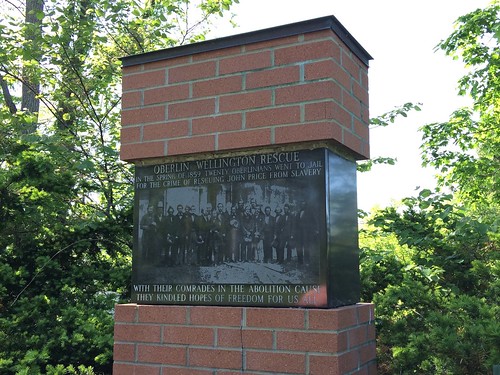 A memorial for the Oberlin-Wellington Rescue

Failed item 1. Be a beer fairy
During reading period finals week, there are some kind souls who take it upon themselves to give out snacks and drinks to people studying in Oberlin's libraries. Collectively they're called beer fairies because most give out beer. Since I only had one final that needed my attention after classes ended, I decided it would be nice to give back by being a beer fairy myself. Unfortunately my intentions were better than my organizational skills and I never really figured out when it would be best to dispense the beer or got together an appropriate beer fairy costume.

4. Go to Krieg's
One day when I was telling my friend Ronni about this list, she asked if I had ever been to Krieg's, a food stand a few miles from campus best known for its fruit custard. To her seeming horror, I told her that I hadn't and she convinced me to add a trip to Krieg's to my bucket list. I ended up going that very night, and then about seven more times before the end of the semester. Going to Krieg's became a great excuse for a study break, a way to avoid lazy end of semester co-op meals, and provided a brief escape from being on campus. It was where I celebrated turning in my capstone and where my family went to lunch with Ronni and her parents. Weirdly enough, that food stand became an important part of my Oberlin geography - all thanks to Ronni (and the berriez). 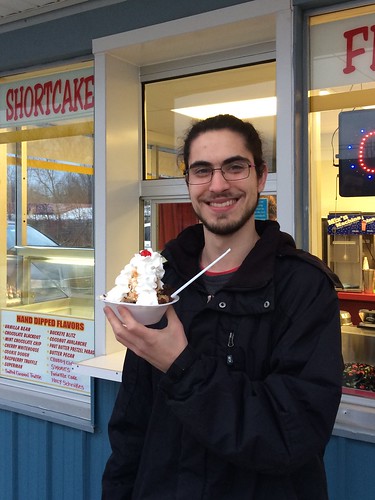 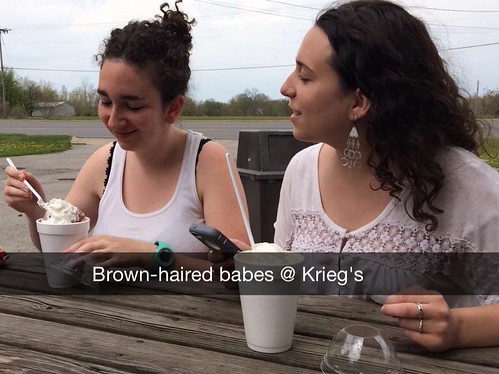 Pablo, Ronni, and Sarah at Krieg's on various occasions

5. Join a co-op
Being in a co-op is an Oberlin experience I had resigned myself to missing out on by January of my senior year, but to my surprise, I ended up getting into Old B for my last semester. At first I was a bit worried about how it would go. I only had one good friend in the co-op and really had no clue about how OSCA functioned. I still don't really know how OSCA works beyond the basics, but I ended up loving the experience. Sure, I ate a lot of bland beans and slightly gummy bread and I never want to see unseasoned, unincorporated tofu again, but often the food was really good. I'm very biased, but I always enjoyed the meals prepared by the Thursday night dinner group I was part of. 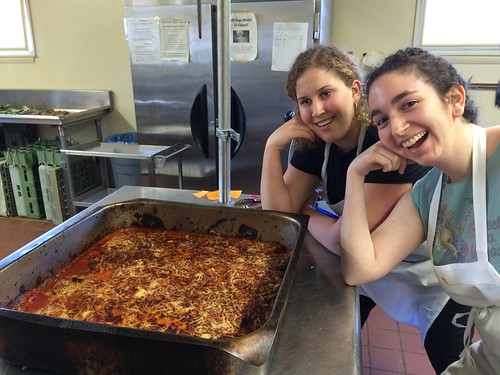 Kayla and Ronni, the head cooks of my Thursday night dinner shift, with some eggplant parm 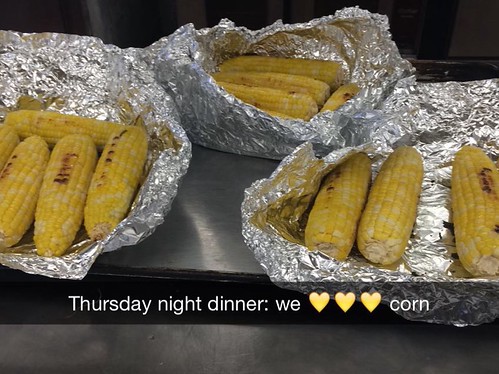 Once we figured out how easy and delicious corn in the oven was, we made it almost every week

More importantly, though, I met a lot of really great people and made friends who I definitely wouldn't have otherwise. In only one semester, we spent many hours cooking and eating together at Old B, at Jacob's house, at Krieg's, or in Stevie when it came to that. We formed a winning Slow Train trivia team (crossing another item off of my bucket list), did karaoke, went to each other's concerts, presentations, and parties, and just generally spent a whole lot of time together - time I felt lucky to have, but wish I had a bit more of. 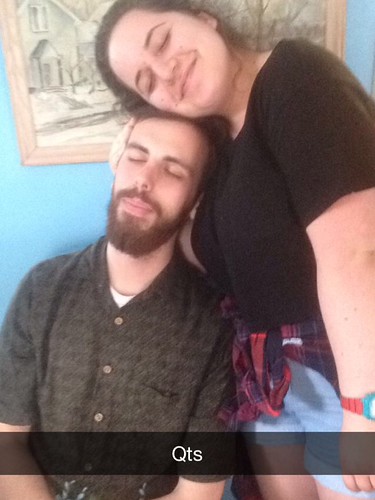 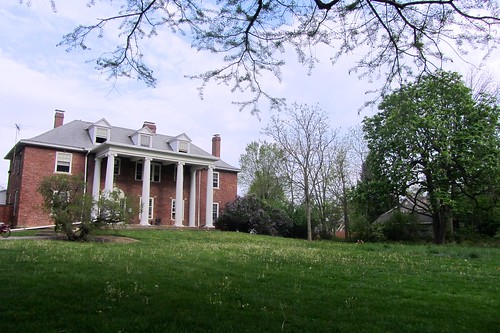 Failed item 2. See the sunrise at the Arb
I'm not sure why I decided I wanted to do this in the first place or why I thought that I could convince any of my friends to do this with me during commencement week. But this I do know, when I come back to Oberlin, the Arb and the sunset will be there waiting for me and I'll be ready to see them.