I have had the pleasure, during the past few weeks, of exploring Oberlin by four different means:

1. After being prompted by Ma'ayan to find the rooms in Wilder that end with double zeros, I made it my mission to go roaming through the entire building, because why not? It was raining outside and I had just completed my umpteenth hour in Mudd and I needed a change of scenery. Wilder was quiet and deserted, the norm on weekends at five PM.

I didn't find room 100, but I found 200, after poking around corridors and sticking my head into rooms and offices. Somewhere high above me I could hear somebody's band practicing, and they were good. (I have yet to hear a band at Oberlin that doesn't sound good). If you haven't taken le grand tour of the upper floors of Wilder, you should. Some of the walls are pretty rad and I kind of wish it was still a dorm, as it apparently used to be some time ago.

After a circuit of the second floor, I slipped back inside Room 200, which took me to 300. (If you haven't figured out what these "rooms" are yet, and are under the impression that I removed ceiling tiles or sheetrock to reach the next one, I suggest you go figure it out for yourself.) The music was getting louder, so I went up one more level. I refrained from opening the door and instead put my ear against it to listen.

There are lots of great things that go on in Wilder and it's also nice and warm. It is a little eerie when the halls are silent and deserted, but it adds to the charm. I also would totally want to live there. And despite the eeriness, at least I didn't encounter any bats like I did in Burton during my first week here. 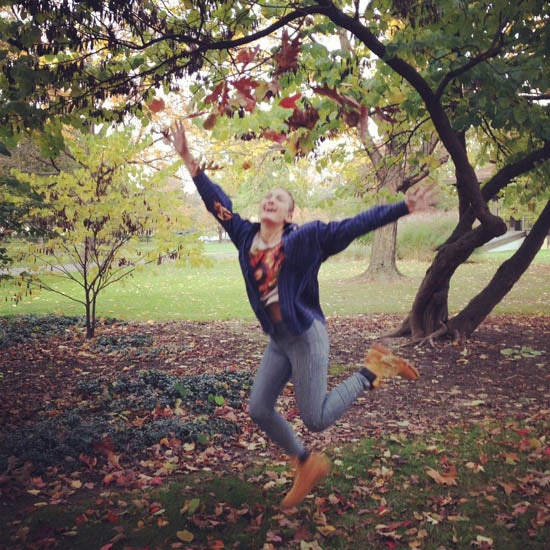 AAHH! PHOTO! IT WORKED! I feel so technologically savvy. My friend Olivia captured my goofy self enjoying Fall outdoors.

2. The Oberlin Arboretum is a magical place. Walking through the pretty neighborhood to get there is nice, too. I made an extended visit to it one day when it wasn't too cold out so I could sit on a bank and read a book. I would include photos, but my laptop is currently being incredibly stubborn and I think photos in blog posts are going to have to wait a while.

But actually... if you're at the point where you're taking the Arb for granted by now, just think about it. There are ponds with really gorgeous trees and some serious peace and quiet just minutes from campus! Of course the ponds are a little buggier than desired, but still. It's accessible and free (just think how many parks and preserves around the country have entrance fees and would be completely not handy for broke college kids) and it's just a wonderful place to take a few minutes to breathe. 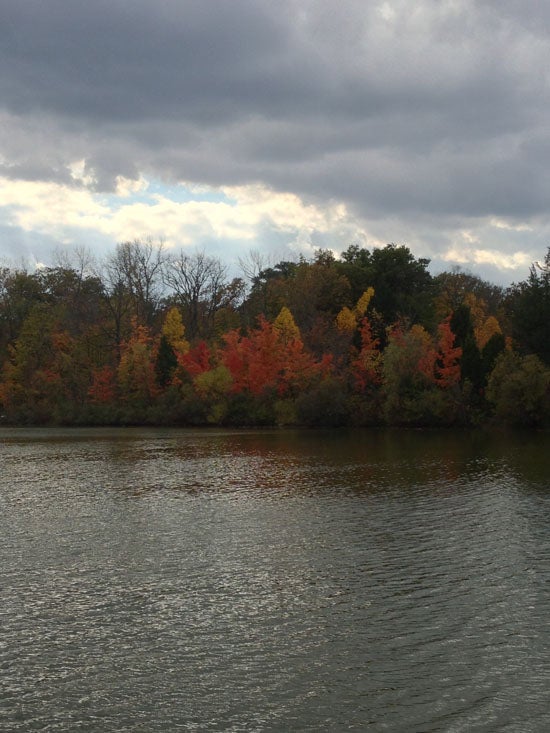 The Oberlin Arb in all its glory.

3 and 4. In anticipation of my first Halloween at Oberlin, I borrowed a car from a friend so that I could make a little trip to the far-away land of Walmart to buy some last-minute items to perfect my costume. Little did I realize how befuddling it would be to leave the half-mile radius that marks the invisible border of my quotidian doings around campus and town. As I passed the Mickey Mart, I felt a true affinity for Sam from the Lord of the Rings (this is the unveiling of my incredibly nerdy subconscious).

"If I take one more step [pass one more traffic light] it'll be the farthest away from home I've ever been."

And then I really did drive off alongside a cornfield. I guess Ohio and the Shire have a little bit in common after all. But really, driving a car around and beyond Oberlin felt rewardingly strange. Being inside Walmart was an exercise of self-control... just because a lifetime supply of Oreos in a single, low-priced package exists does not mean that one must purchase said package.

Halloween was quite enjoyable, even the part where I was caught in a torrential downpour that resulted in a long night of wading through Lake Oberlin and a red feather boa that has yet to dry completely. 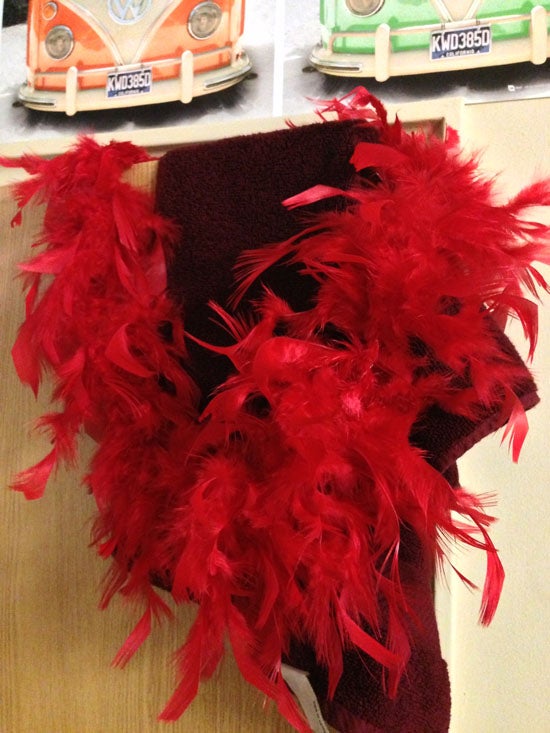 Le damp feather boa and some VW buses from the poster sale.

What odd things have you all encountered around here? ("You all" being my readers, in the vain hope that they exist.)

Seriously, if anybody has weird stories, hidden spots, or places I should investigate, please comment below!

Second floor Peters tower nook, on the west side. Comes with adorable circular shelves and a stash of books, last time I checked, including some of my favorite comics of all time.

I adore that picture of you! Every day when I'm trudging around from one obligation to the next, the trees catch my eye and I remember that the little bubble I live in is so, so beautiful. I should go to the arb more.

I've never been to that nook, Ida. I must go exploring! LIKE NOW.

Another cool thing or three in Peters:

- Befriend Barbara Sawhill (fellow Oberlin blogger and director of the language lab... which if you haven't visited yet, you MUST! There are birds! Third floor Peters! Also Barbara is the bestest.) and ask her if you can explore the spire of Peters (the entry spot is through her office)! There's graffiti there from the turn of the century — the last one, not this one — and it's AWESOME.

- There's a stairway that goes nowhere. Go up the grand staircase to the second floor, then head westward/Muddward and you'll see a small staircase that goes straight into a wall. I'm sure there's some history there... But I don't

- The next time there's open hours for the observatory, GO! It's the highest point to see Obertown, and it's really beautiful. Also, if you join the astronomy club and get trained, you can access the viewing platform pretty much whenever. (It's awesome if you learn about a meteor shower or a solar eclipse like there was this past Sunday!)

Do you know about the WWII memorial on the south side of Finney? It's got a fountain and when it's warm there's flowers and trees and it's gorgeous. Also a bench. It's a lovely location.

A follow up to Ma'ayan's mention of the Cooper International Learning Center in Peters....

It's true, there is a door to the spire in my office, but given how disruptive it would be to my workday, not to mention the safety hazards, that is not a space I can allow people to access. That being said, there are lots of other open and accessible spaces to explore up here on the third floor of Peters that you should feel welcome to visit and enjoy!

Please come and meet the birds (Iago, Flaubert and Beatrice), especially on Mondays. The CILC is closed for most of the weekend, and they miss seeing people during that time. Iago and Flaubert do a mean rendition of the Andy Griffith Show theme song when prompted. If you bring Cheerios or hardboiled eggs they will love you even more (I know, it sounds counterintuitive and even gross, but cockatiels love to eat eggs).

You might also enjoy hanging out in our hammock (yes, that is correct, we have a hammock) or watching the colorful fish in our 75 gallon fish tank (it's quite therapeutic after a stressful day of language learning we are told).

Come play WoW in Russian or LoL in Spanish. Srsly.

We play music on the sound system and encourage people to converse outloud in any and all of the 12 languages we teach here at Oberlin.

!!! Why have I never been to this magical place!

WAIT I didn't know you could bring snacks for the birds! I've been doing it wrong this whole time! Also I second the hammock awesomeness. My parents came to visit last year and took a nap in that hammock. It's practically perfect in every way.

And Barbara, apologies for the seemingly open offer to visit your office all the times. (But now you have some new friends. And so will the birds.)

OH OH also have you seen this photo from Lake Tappan Square in 1924? http://oberlin.edu/alummag/fall2012/juxtapositions.html

A field trip for you: if you visit Communications, Ben Jones has a print of that photograph in his office if you want to see it bigger than the link above.

(Thus ends my barging into your comment thread to tell you all the cool things. For this blog post, that is.)

Aaaah! Guess who the person in the first Arb picture on the site you linked to is!

To all of you who generously bestowed me with ideas of places to go find...
Thank you, and also I will probably never get any work done ever again.
Instead I will be off galavanting, all of the time.

Thanks for the blog. It brought back a lot of memories of Wilder and Peters when I was a student there in the 70s. I had a Religion class in the Peters Spire and you got to the classroom by climbing some stairs from the second floor. It was an awesome classroom with
all sorts of archeological artifacts. Wonder where Oberlin keeps those now?

Asia House Quadrangle is also a good place to explore starting at the Fairchild Chapel. The library on second floor and the dining hall are reminders of the days when the Seminary was located there. There was also a basketball court in the basement!

Oh YEAH I second that! I wandered into the Asia House lounges for the first time recently and WOAH! I won't spoil it for you, but now you have to write a blog post about it for all the people reading these comments who are going to be insanely curious.

Some moments of Winter Term serenity, such as my morning enjoying the snowfall while practicing the viola da gamba.