The job search is one of the most stressful experiences I've ever had. The only time I've ever felt so confused and overwhelmed was writing my college applications.

As I was looking to work as a college admissions officer, the similarities were incredible:
1. Requirements:
- The cover letter versus the personal essay;
- the resume versus the transcript;
- the writing samples versus the supplementary essays;
- references versus recommendations.
2. The overwhelming sense of doom that you're going up against candidates who:
- have cured cancer and earned perfect SAT/GRE/GPAs
- volunteered for over 2000 hours, speak three languages, lead multiple clubs,
- won prestigious awards, got the top internships...
3. The quaking inadequacy:
- when looking at the errant C or the semester when you got sick during finals.
4. The horrible, treacherous fear that other smart kids from your school are applying for the same space.
5. The sweat of an interview: how to present yourself without looking like a braggart or a lump.

While doing homework, I procrastinated on the jobs site at the Chronicle of Higher Education. I applied for admissions jobs at a few of the big liberal arts colleges, places where my interning skills would be good preparation. In between dealing with circus-related shenanigans, I looked up common interview questions.

When I was jogging, I asked myself in "Interview Voice," "Miss Indenbaum, how would you describe your strengths and weaknesses to the esteemed selection committee?"

All the fancy guidebooks I borrowed from Career Services said that of one's many flaws, one should choose the one that could double as a strength.
My tactlessness... was honesty! I kept it real!
My stubbornness... was grit! I persevered through obstacles!
My eccentricities... made me distinctive! I'm an individual!

When I was trying to get into college, there was a clear timeline. I knew that by mid-March, I would know the results of my January application. In April, I would visit schools, and by May 1st, it would be done.

But when I sent out my job application, I didn't know when I'd get the call back. Or the postcard telling me to be patient. My calls went to overbooked secretaries who told me to wait it out. When I looked at my graduation date, I felt the bile within my stomach rise. I needed a job soon.

There was one job I was really excited about: the Communication Fellowship at Oberlin. As a fellow, I would maintain the Blogs (that you read right now), manage the Stories Project, and do a lot of the web content management. Unlike the other jobs, it wasn't painful to write my cover letter or edit my resume.

In my spare time, I was already spending time at Communications, working on a Creative Writing Anthology with Harris Bard Lapiroff, Internet/Arts/Design Mastermind. For reference, Harris is the other half of Ma'ayan's Office Hours, and one of the most charming people ever invented. 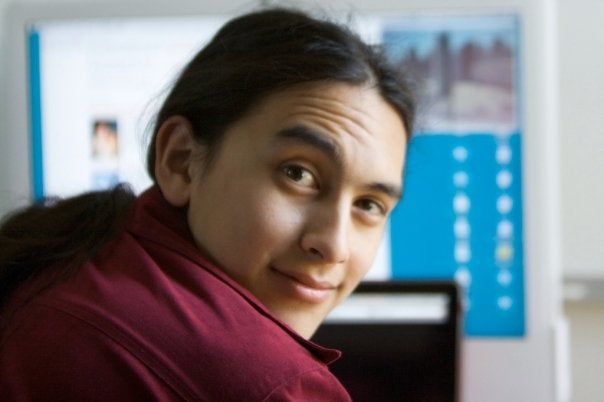 Harris, on the job!

As I worked on the anthology, plugging stories and poems into Dreamweaver, I got to hanging out with the web team. The walls of the media lab were covered in white boards, one of which displayed a list of rules. Of the twenty rules, none were serious. Most of the rules contradicted each other and had little to do with reality. For instance:
13. You must do work in the lab.
19. No work allowed.

The web team itself was a really excellent group - despite being a noob, I felt really welcome there.

The web fellow job would be working among these folks. Score.

That said, nearly forty people were going for the job, folks who probably knew far more about computers, programming, and the internet than I did. Computers have been a large part of my life, but I can't touch type, I haven't radically customized my MacBook, I only know HTML (not CSS, PHP, JAVA, or C++), I don't know many non-standard applications...

I use my computer for word processing, data storage, and internet access. I don't game, manipulate sound, or make videos. I write stories. The computer is my story-box.

I sent in my application, my writing samples, my resume. I crossed my fingers for the interview, which finally arrived.

On Interview Day, I felt horrible. The butterflies in my stomach were kicking up a hurricane across the tubes of my intestines. I accidentally arrived too early, mistaking 10:30 for 10:00. I paced outside, chewing down a pack of Rolaids.

This was weird - I give interviews on a regular basis. For months, I'd asked high school seniors why they wanted to go to Oberlin, what they did in their spare time, what they wanted to do after college. I assumed that I would be cool when the shoe was on the other foot. Besides, I knew these people, I'd worked for them. I should be fine. Totally fine.

As I shook hands with my interviewers, my stomach whimpered. Sweat trickled down my neck. I was not feeling fine.

There were four interviewers: Ben Jones, Cary Foster, Lillie Chilen, and Shane Macdonald. Imagine the Fantastic Four. Now imagine them asking you how you'd work within the structure of the Justice League.

I don't remember much of the interview. Sadly, they didn't ask me my strengths and weakness. I would find out the results during the Wednesday of Senior Week.

On Monday, I got an email from Ben Jones to "answer a few questions." What did a few questions mean? Had I done something wrong? Had my lack of computer skills canceled out my other benefits?

I took some calming breaths and made the appointment. Then, I put on my nicest heels and tried to walk normally. I was a titan, 6'3" of hopeful applicant. Height is just like confidence. Yep.

When I arrived at the office, shaky in my heels, Ben was beaming. Now, Ben Jones smiles a lot. I'm glad he was, as this was the "reservations" interview.

Of the two reservations, I batted one out of the park and flubbed the other.

Then, Ben shook my hand and, beaming, offered me the position.

And all was jubilant and great.

In short: I got the job! I'll be in Oberlin for one more year, making our little corner of the internet a happier place.

Look, it's even official, from The Source:
Aries Indenbaum - Web Fellow
Aries works in the Office of Communications assisting the director of new media explore third-party social networking opportunities for Oberlin, managing the Oberlin Stories Project and the admissions blog site, and generally maintaining a connection to the student body. She graduated from Oberlin two days ago with a BA in creative writing. Aries was born in Point Reyes, California, and went to school in New Rochelle, New York. "In my free time, I tell stories, contra dance, write, run, and do circus," she says. Before graduating, Aries worked in admissions and blogged about her experience as a student.

Hey, congratulations on getting the job! It sounds like you really deserved it.
Well, my name is Bridget and I'm a highschool senior who is college searching. I'm definitely interested in creative writing, english, journalism, etc.
Could you possibly email me and let me know why you chose Oberlin over other college possibilities?
Thanks for your time,
Bridget Gibbons

Thanks! I'm really loving it so far.

Well, I reposted my original blog entry from when I visited,

In the end, I was looking at Oberlin versus a Writing School. Though I want to be a professional writer/author, I chose Oberlin for a variety of reasons.

2. History. First college to admit and grant degrees regardless of race or gender. AWESOME.

3. Ideals. Oberlin students care about everything. Especially the environment, social justice, the arts... everything. Folks here were very passionate and very willing to share their passions.

4. Diverse, in all ways. Student here are from everywhere and do everything.

5. Vibe. Non-competitive, but not... slow. Nearly everyone was friendly, busy and happy.

If you've got any other big questions, don't hesitate to email me at aries.indenbaum@gmail.com

By the way, I want to be the really huge guy (bottom right) in the Fantastic Four picture. Shane is top right, Cary is top left, and Lillie is pretty obvious.

Man, we bloggers have the best bosses in the world! :o)

Congrats on the job, Aries. Best of luck and have fun! -Zach Pretzer '03- (Development office)