This past Tuesday, I had the delight of waking up and having nothing on my to-do list that absolutely had to be done that day. This is a rarity for me; my friends tease me about my epic to-do lists, which generally span multiple pages, and invoke whatever faint traces of a type-A personality there are inside of me. Reliably, the first way I took advantage of my free day was to drag my roommate and best friend, Seyeon, out of bed and into Ohio's first snow of the season for a morning run with me.

One truly fantastic aspect of Oberlin and the surrounding area is that, small as it may be, there are always new corners of it to explore. I have spent three years here, in all four seasons, exploring it on walks, hikes, runs, bike rides, and by (okay, technically against the law...) swimming in its ponds, lakes, and reservoirs, and I am still forever discovering new nooks and local delights.

There are some token places you learn about, the longer you spend in Oberlin, and the more you talk to people who've been around awhile - the stray kittens you can play with at Gingko Gallery downtown, the 13-mile bike path that leads to a playground in a neighboring town called Kipton, woodsy paths and natural fire pits in the Arb, the beautiful reservoir off Pyle-South Amherst, the joy of freshly baked bread at Oberlin Market, or a cone of pumpkin ice cream at Yesterday's, or poetry readings and free wine one Sunday a month in the FAVA art gallery on Main Street...the list could go on forever.

Seyeon and I initially headed out on a familiar running route - along the beautifully tree-lined Morgan Street south of campus and toward the reservoir - but decided to let ourselves get side-tracked on a dirt path that led off into unfamiliar woods. We wound up plowing through brambles to emerge on some abandoned railroad tracks nestled deep in the woods.

We ran along the tracks, our feet crunching the snow between the railroad ties, until we arrived at a bridge we weren't sure we could trust to cross; an old iron sign there said that it had been erected in 1906. It was a magical morning - the snow falling all around us as we ran along a corridor of Ohio's past, the tracks overgrown with weeds and extending indefinitely in both directions, disappearing into the fog. 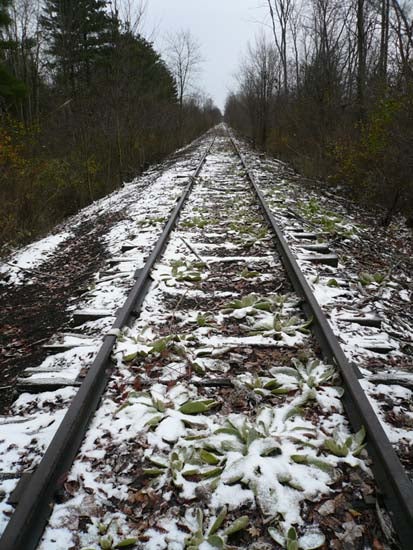 We climbed down to the country road winding below the bridge and opted to run along that instead and hopefully weave our way back to campus. Having scarcely made it a few hundred feet, though, we stumbled across a house with a big garage filled with stunning pieces of pottery, and a "ring front door bell for assistance" sign. We rang the bell and had the pleasure of meeting this man: 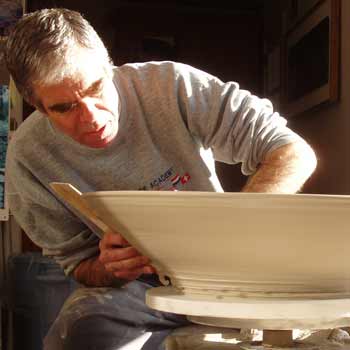 ...who graduated from Oberlin in the seventies and later settled down here with his wife to build his own kilns, make pottery, and run a gallery and store out of his home. (http://breuerpottery.com if you're interested!) He also helped start the Pottery Co-op on the Oberlin campus - a fantastic resource for experienced and newbie pottery enthusiasts alike! We spent a good half hour talking with him about his art and philosophy and life experiences before going on our merry way.

Nothing like a few hours of totally spontaneous exploration to reignite my inner child, inspire and energize me, and make me appreciate this area just that much more. 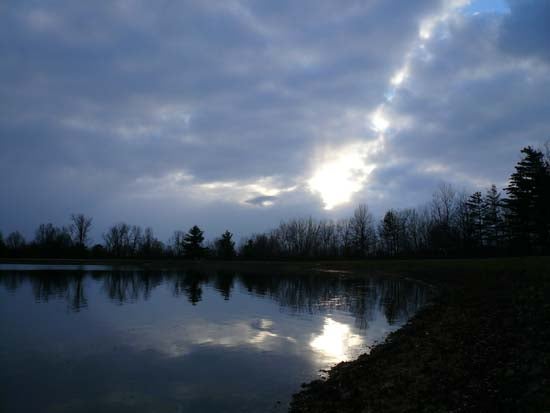 Yitka, this sounds (and looks) amazing! And yes, I DO feel very cool commenting on your blog :p

Wow! You have to show me those railroad tracks sometime. It would certainly make a morning run through the snow more appealing.

Yitka! I discovered those railroad tracks and bridge a year or two ago (also on a run). However, I didn't stop and meet any exciting potters. I wish I had more of a knack for meeting people.
(I am currently wasting time while working at the circ desk)

Renee! (For those following the comments here, Renee is my wonderful roommate from freshman year who I adore with all my heart) - if you ever want to go for a run and stop at the potter's house, let me know. I love company on my runs!

Rachel -
Will do!
In the meantime, though, I find that the IDEA of running through the snow is a lot more intimidating than the activity itself actually is. My best advice is to just get out there and do it :)

Daniel -
Thanks! Indeed, the commenting feature is pretty sweet. I'm looking forward to continuing dialogue on our entries :)

Yitka! These photos are awesome and this adventure sounds amazing. Exploring is so fun and there are few better feelings than the one you get when exploring a place you know well and you find something new. It's refreshing. :)

I heart your blog, I'm putting it on my favorites. You win! :P