The following post is a special, one-time-only, guest appearance blog written by my best friend from home.

My name is Aleena, and I am a Yalie. I'm still working on whether or not I can call myself a proud Yalie, but to be clear, I am incredibly thankful to be where I am. I spent my past week visiting Dara at Oberlin, just as she visited me in October (see Oberlin v. Yale), and now I'd like to share my observations, because I truly believe that Oberlin is an incredible place, and it might be interesting to hear about from a non-Obie perspective.

Firstly, I'd never been to Ohio before I came to Oberlin, and simply rolling through the cornfields into this microcosm was a bit of a trip for me, coming from urban New Haven and never having been to such a small, isolated city. The day I arrived was an uncharacteristically beautiful March day - I wore a light long-sleeved shirt, only one pair of pants (half as many as I'd become accustomed to) with flip-flops. It was great. Dara showed me around Oberlin's quaint campus, ending with this amazing rock she spray-painted to welcome me. 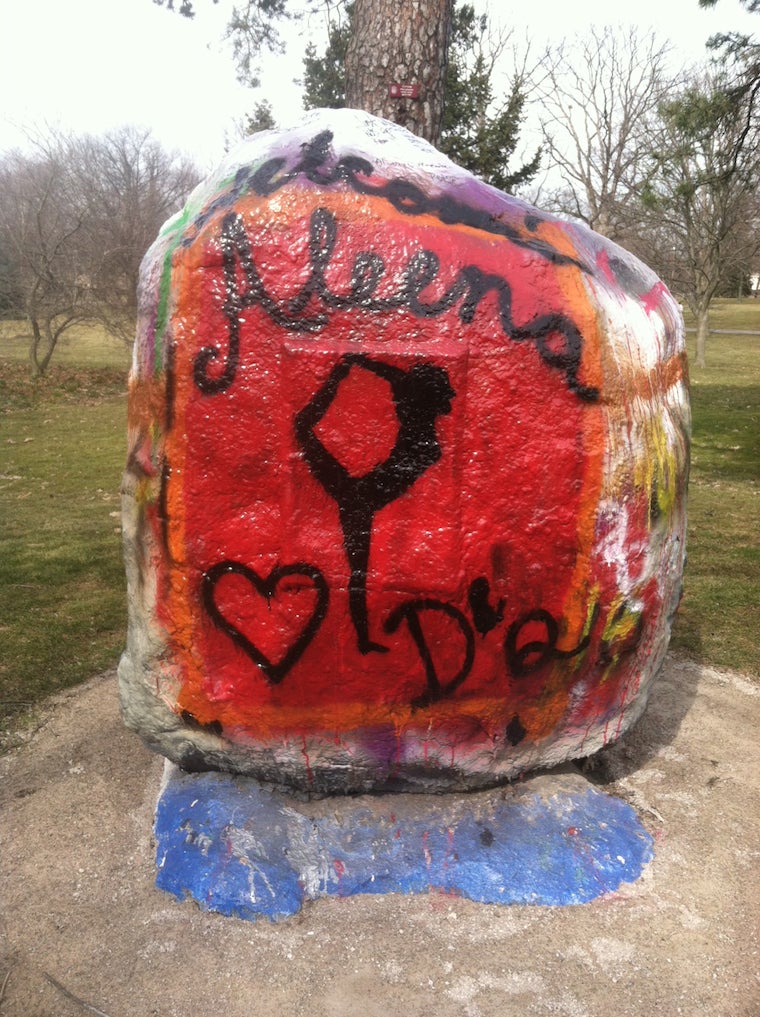 After the tour, we went to find her friends in the gorgeous, enormous windowed science center where we stole them shoelessly away from their studies to do acro in the grass outside. 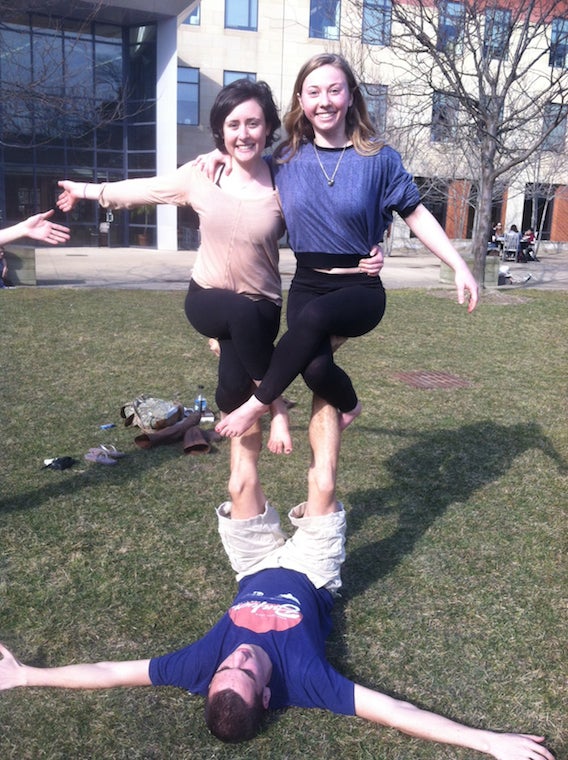 A few of them had to return to their studies before long, and eventually it was just Dara, my Obie counterpart Quinn (Dara's best friend here), and me. Then something unusual happened. A student approached us bralessly and asked if we were wasting time. Unsure how to respond, we said yes, and she clarified that she was only wondering because she was going to a national park about 20 minutes south of Oberlin to enjoy the beautiful weather, and thought it would a shame to go with an empty car. Hesitant, we eventually agreed to go along with her and had a great time. 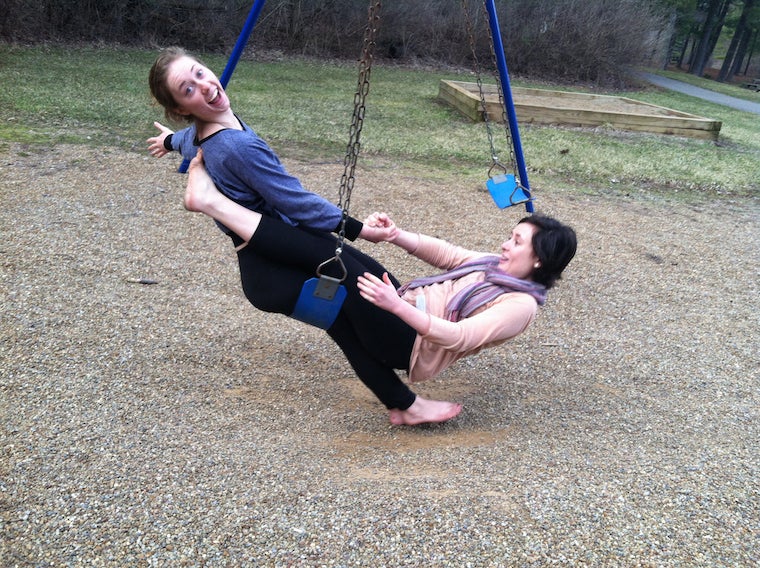 We played on the swing set beside a lake, sun setting in the background until it was time for dinner. The kind stranger drove us back to campus taking all the back roads, speeding along, rolling up her own cigarettes and occasionally spewing profanity at fellow drivers.

Dinner that night included gluten freezzas (gluten free pizzas) topped with tofu, mushrooms, squash, and cheese. After dinner I became aerial certified at the gym and played around on the silks for a while, ending the day with some more acro.

This was only one of the seven days I spent at Oberlin, but probably the most indicative of my time there. The rest of my week included a lot more acro, yoga, and aerials. I also spent some time doing contact improv, dance, rock climbing, contra dancing, and watching a dumpster-diving documentary, to name just a few things. Along the way I had some very interesting conversations with incredible and unique individuals, such as a compulsive, bike-making Californian and a woman who helped me tune into my intercellular fluid. All these activities and interactions led me to these conclusions about who an Obie is:

1. Your typical Obie is not embarrassed to take their clothes off.

While there, I saw nine people pantless, four sets of breasts, and countless other shirtless, shoeless, and/or braless individuals. I myself went shoeless and braless during my time there. Along the lines of appearance, there are no rules for how an Obie should look. A lot of girls have very short hair, a lot of guys have very long hair, a lot of people have dreads, a lot of people have beards. Armpits and legs go unshaven from every gender, and you might find people pierced in places you never thought of. Whatever style you have or orientation your sexuality or gender happen to be in, you will be respected equally.

2. They take care of their bodies - inside and out

In almost any setting you're bound to find at least one vegan, gluten free, or vegetarian person. Most people seem to have some sort of restriction on their diet, whether for religious, ethical, or allergenic reasons. There are co-ops where students are entirely responsible for governing their own living and eating space, and have jointly decided to choose organic, free trade, local, sustainable food sources and all offer gluten free and vegan options at every meal, with meat being a huge rarity. Obies want to change the way humans interact with the earth and lead by example, which can be done in large part through how they get their food. On the outside, you'll find many a yoga-doing, meditating, circus-tending student here at Oberlin. Everyone seems to have their own way to stay fit, and most people try to respect their bodies' needs. Obies are sustainable in their own bodies and as citizens of the planet.

3. Obies are the most accepting people you will ever meet, unless you're not being politically correct or are generally unaccepting or closed-minded.

There is not a single type of person of any race, gender, sexuality, ethnicity, or socioeconomic background who will be shunned by any student or faculty member at Oberlin College. I saw a wide array of all these types of people at Oberlin and no one (as far as I can tell) is ever treated any differently for being different. People are proud of who they are here, will stand up for what they believe in, and will not be quiet about it. Obies work to make the changes they want to see, even if they come off as radical hippies. And as strongly opinioned as they may be, they still remain refreshingly open-minded and eager to wrap their minds around a new idea. This is one main discrepancy I have found between Yalies and Obies. A Yalie works his or her butt off to become the best at what they want to be and achieve what they've set out to achieve for themselves. An Obie is usually working towards either social or environmental justice and/or peace within their own body or mind, even if that means that might not make a ton of money after they graduate, or be considered "successful," by the standards of most Americans. Obies don't care so much about what others think, they're going to do what's right by and for them. And there's really no need to care what others think at Oberlin, because no matter who you are or what your goals are, your peers will respect and accept you.

So in the end, you have to ask yourself the kind of person you want to be, and what college can best fit your needs to do that. Yale is hands down an incredible school, arguably the best in the world. But what does that even mean? I have world-renowned professors (and peers!), my food is amazing, my school's architecture is right out of Harry Potter, and our gym is the second largest in the world. But being at Yale, I don't really feel like I'm getting a much better education than I would anywhere else. Maybe I'll find that changes in the coming years, but for now, I'm frustrated with the educational system and unyielding bureaucracy here. I find amongst most students at Yale it is also much more critical to dress and act to the status quo. I've found myself embarrassed to go out in rainbow tie dye dress and full body unitards, where I never have before.

Oberlin might just be one of the most progressive places in the country. And although you can make the best out of wherever you are (my challenges at Yale will certainly only help shape me more to who I want to be in my adventures to overcome them), if anything I've spoken about above appeals to you, and you get the opportunity to go to Oberlin, go. And whether or not you matriculate, be proud you were accepted, and respect the amazing group of individuals who are Oberlin College. 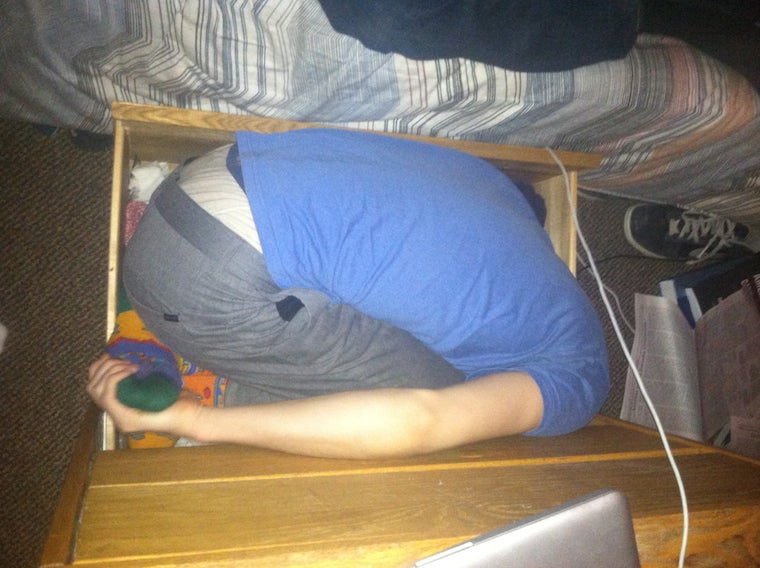 Can't keep Obies thinking inside the box, although they might get in one for fun.