One day I logged onto Facebook and noticed that I had an invitation from Anna Ernst, a friend of mine, to a new group: Active Minds at Oberlin. Figuring that I have an active mind and that I like Oberlin, my curiosity was piqued.

It turns out Anna had discovered Active Minds during the summer of 2009 and had decided that Oberlin could benefit from a chapter. Active Minds is a national non-profit organization with the stated goal of "changing the conversation about mental health." Its entire purpose is to reduce the stigma surrounding mental health issues on college campuses and encourage students to seek help and encourage those they know to seek help.

I'm going to talk about them. And that's the entire point. With a campus community that self-proclaims its open-mindedness, Oberlin students should be able and willing to talk about the delicate subject of mental health. Getting off the ground is the tricky part of founding any new student organization. Luckily, we had some help along the way.

Fall semester started off rather slowly - crafting a charter, finding people to sign the charter, going through the various stages of Oberlin's chartering process, etc. I should mention that most of this work was done by Anna. I signed the charter, but was focusing the majority of my attentions on other organizations of which I was a member. Oberlin's chartering process isn't difficult, it's just frustratingly time-consuming. We had our charter signed before the end of fall semester and we weren't officially recognized as a chartered organization until May. We didn't wait for an official charter to get the ball rolling, however.

Spring semester proved to be much more productive. Our small but dedicated group began to meet once a week and plan on how to reach out to the Oberlin community without stepping on toes along the way. Anna wrote several letters to the editors that were published in The Oberlin Review, Oberlin's paper of record.

Our first official event was co-sponsored with Oberlin's Counseling Center: free depression screenings. Try to figure out how to advertise that. It's tricky. Though relatively few students actually chose to get the depression screening, we began to attract attention by tabling outside the Student Union and talking to people as they walked by. 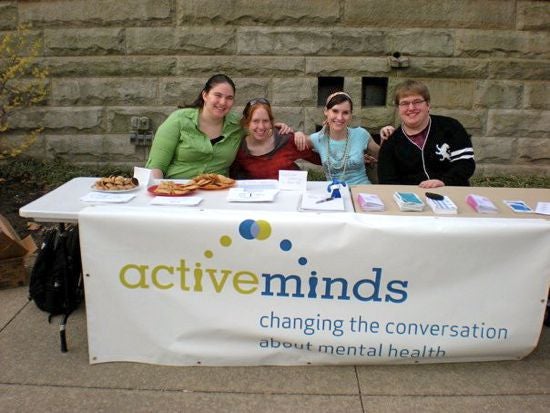 From left to right: Anne, Anna, Katie, and me!

We got enough attention to be featured in an article in the Review. Then, something rather unexpected occurred. Marvin Krislov, our beloved college president, decided to highlight Active Minds as part of his feature in The Source, Oberlin's weekly online newsletter.

Reinvigorated, we went about planning our next (and much more successful) event. We had several conversations about Oberlin's various mental health resources - of which there are many - and noticed the unfortunate trend that these various sources rarely, if ever, work together. Wouldn't it be great, we thought, to put all these resources in the same room? Out of this simple, yet profound, idea came a panel entitled "Eat, Sleep, and Be Merry: Perspectives on Mental Health at Oberlin."

The panel, which was co-sponsored by Student Senate, the Counseling Center, and the Center for Leadership in Health Promotion (CLHP), featured five speakers:

Never before had these five people been in the same room to present their resources to the Oberlin community. And, to top it all off, President Krislov provided his support by agreeing to be featured on our posters. 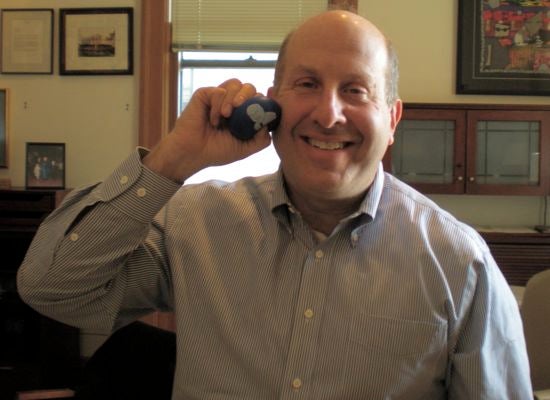 The image our lovely college president let us use to advertise "Eat, Sleep, and Be Merry"

The event was a resounding success. Attendance was respectable - about 50 or so students and staff attended the event. This event closed out our year in late April and left us feeling quite good, considering the fact that we had yet to be chartered.

In May of 2010, the General Faculty of Oberlin College approved the charter for Active Minds at Oberlin and we became the 269th Chapter of Active Minds, Inc.

Perhaps the most exciting news when we returned to campus in the fall was that Lori Flood's new title is Director of Wellness and Health Promotion. The College is slowly, but surely, beginning to integrate its various health sources.

Over fall break, Active Minds sponsored a Sleep Week. I mentioned it briefly in my post about fall break, but I'll explain the idea again here. College students often stay up into the wee hours of the morning - I may or may not be typing this post at 2:00am - and most college students rarely get enough sleep. Getting enough sleep is crucial to functioning at the highest level possible for each individual and allows people to live a more healthy lifestyle.

Deciding that midterms week would be a great time to promote sleep, but knowing that our words of wisdom would fall on deaf ears, we planned this event for fall break. Students were given the opportunity to pledge a certain number of hours to sleep over fall break - the minimum requirement being 36 hours - and if they met or exceeded their goal, they would be entered in a lottery to win a $10 gift card. 80 people sent in sleep pledges and once we hear back from them, Jamie and I will do the lottery drawing. In their emails at the end of break, many students commented on how rested they felt and that they were going to try to continue their sleeping patterns from fall break during the remainder of the semester. God speed, friends. God speed.

I can't even explain how exciting it has been to see an organization grow from a few dedicated members to one that is able to get 80 students to pledge to adopt good sleeping habits. I cannot take credit for the success of this organization. Everyone who has been involved with the organization, whether they be students, faculty, staff, or administrators, deserves credit for the success of Active Minds. And, of course, a special thanks goes to Anna Ernst for bringing this wonderful organization to Oberlin's campus.

If anyone has comments/suggestions/questions related to Active Minds or mental health on Oberlin's campus, feel free to shoot an email to active.minds@oberlin.edu. Jamie and I would be more than happy to respond and all input is always welcome.

This time around, I figured that I would end with a quote relevant to this post:

"Diseases of the soul are more dangerous and more numerous than those of the body." - Cicero

It really excited me to see you guys all over the place during the first months of this semester. This organization is in such great hands :)

AMAZING article, Patrick!! All of you have done such incredible work this year, you guys are Active Minds rock-stars! :)