(Preface 1: CUPSI is the College Unions Poetry Slam Invitational. It's basically the Super Bowl of college slam poetry - it happens once a year, in a different place each year. Slam poetry, for the uninitiated, is original performed poetry (performed as an individual or, in this case, as part of a team) that's given a score out of 10. The team with the highest score wins. That's about all you need to know.

Preface 2: Mostly, this blog is going to be about me doing things that have no relation to anything I've done, but I would be remiss if I didn't blog about getting a team together to go to CUPSI. Yes, it's connected to OSlam!, but it's also by far the biggest, newest thing I've done this year. Bear with me.)

I love to step outside my comfort zone - that's why we're both here sharing the corner of the Internet together. I've done a lot of things that made my heart try and jump out of my body, and been so glad for them afterwards. But on the other end of the universe from my comfort zone is a space so dark, so foreign and frightening, that I avoid it at all costs. In that space lives logistical paperwork, and to get to CUPSI I had to wallpaper my life in it. The fact that it was beyond worth it is the biggest indicator of how wonderful CUPSI was that I can possibly give you. Without the love of my team, the life-raft-like support of my co-president Hannah Rosenberg, and the two years I had spent dreaming about CUPSI, I would not have survived the first five weeks of the semester. But March 11 rolled around and there we were, flying over fields and eventually mountains towards one of the best weeks I've ever had.

The next morning we woke up, gawked at the mountains for as long as our schedule allowed, and then headed from our hotel to the University Memorial Center, which was where all the magic happened. 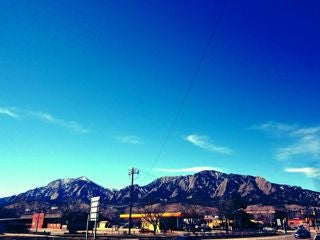 Before our preliminary bout that day, we saw or met three of our poetry heroes, established that we were going to be eating junk food for the whole week (pizza or dining hall food were pretty much the only options), and marveled at how well-dressed all the other poets were. Basically, you could have scraped our jaws off the floor, and that remained true for the whole week.

The first wave of shock wore off just in time for a second wave of shock to settle in: we had to compete that night. I'm not a big stage fright person, I like to say that my second home is in front of a microphone, but I have never been as terrified as I was the night of our first bout. Bad enough that the room was full of poetry giants - we were up against the two-time defending champion, and the coach of another school's team is the reason I got into slam poetry - but my team decided that I should go first. I walked up to the stage, shaking like a leaf, unsure that I would be able to produce words, much less the poem I had memorized.

And then something happened, something that started that night and would continue throughout the rest of the week. As I was standing there, looking over the heads of strangers, the poetry took over. What mattered, more than my nerves, more than my desire to impress or get a good score, was that I had a story to tell. I took a deep breath, told my trembling legs to calm down, and let the story do the talking for me.

We got fourth out of four in that first bout, which squashed any dreams of going on to semi-finals, but took second in our second bout, which made us do a lot of squealing and jumping up and down. There's more to say about the points, endless strategic details that remind you that slam is in some ways more similar to sports than art, but that's not what I was thinking about during the week, and it's certainly not what I'm thinking about now. There's an omnipresent saying in slam: "the points are not the point, the point is the poetry."

I would add that the point is not just the poetry, but also the other poets. I heard so many powerful voices onstage, and the people attached to them were so kind offstage as well. Both during performances and during the workshops we had later in the week - on topics ranging from cultural appropriation in poetry to how to establish a solid slam scene at your college to how improv can be used to make you a better poet - people were so willing to speak their truths. My team and I started joking that we didn't know how to make friends the normal way, without hearing someone's strongest emotions first.

After getting fourth in our first bout, we slunk out of the room and into the hallway, more upset than we wanted to admit. A poet and coach on a team that hadn't competed in the bout followed us out there. She proceeded to tell us, individually and collectively, how impressive we were, how well we held our own for a first-time team with no coach, how much she loved our poetry. Every word she said lifted some of the disappointment off our shoulders; by the time she was done, we were all grinning like idiots. She reminded us why we had come to Colorado.

That first day and every day after that, I met or spent time with someone who made me proud to be a human. Packed into each other's hotel rooms, telling stories to and over each other in our loudest voices, having a cypher in the workout room at 2 a.m. - even as strangers, we were each other's life rafts. In the face of the darknesses we exorcised onstage, we kept each other whole.

I could write a thousand poems and still not come close to expressing my love and gratitude for my teammates, during this week and every week after. Even exhausted, even crammed into too-small beds and cars, all I wanted to do all week was have them close to me. The words to describe what it's like to spend days feeling every emotion on the spectrum as intensely as you possibly can, and what it's like to share that with five other people, don't really exist, but that's not an obstacle. There are certain things that bodies - that hugs, or smiles, or taking up as little space on the bed as possible so that the others can sleep in peace - convey better than words. That's why slam exists in the first place. 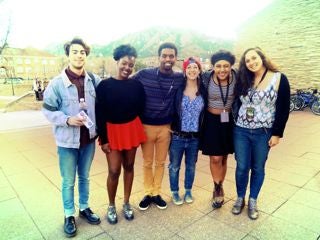 Every day in Colorado, I didn't just meet spectacular people, I met spectacular people who believe what I believe: that arts-related activism isn't frivolous, that it can save and radically transform lives. I met people who make their living along the lines of that idea, just like I hope to someday. In a world that's increasingly concerned with stability and statistics, I came back from Colorado realizing that the best things I have to give to the world are my words. After all the stories I told and heard that week, I truly appreciate how amazing that is.

1. I slammed my valdictory speech in high school. It's a poetic medium that can do so much. Slam poetry on the whole have been some of my favorite on campus performances here at Oberlin, too, and I have no doubt that kind of intensity is magnified when everyone around you is slamming, too.

this post literally gave me goosebumps. thank you for writing about CUPS, alison, and for all the work that you do :) go poet! (also rest of OSLAM: go poets!)