When I decided on Oberlin, I absolutely hated ultimate frisbee. My only experience came from summer camp, where everyone was better and faster than me. My friend Evan Holliday, who went to that same camp, is captain of the men's frisbee team here. When we were hanging out during my prospie visit, I remember him telling me, "Great. You're going to come to Oberlin, and you're going to play frisbee." I politely said I would check it out, vowing to myself that I would never spend another minute on that game.

Two years later, I live (or lived - RIP the quad) with three of my teammates, am playing two summer leagues, and have promised to teach my grandmother how to throw a disc when I see her in July. It's fair to say that frisbee has been a huge part of my life at Oberlin, and in talking about the Big New Thing that I did this year - serving as a co-captain of our B team - it's important to talk about how I got here in the first place.

During the bustling confusion that is every first-year's orientation, I had one constant: tossing with the frisbee team, every day on North Quad, at my friend's insistence. I was surprised to find a group of older Obies that was so interested in me, and even more surprised that learning how to throw a frisbee wasn't as onerous as I thought it would be. By the end of the week, I had realized my friend Evan was right: I was at Oberlin, and I was a member of the Oberlin Preying Manti. 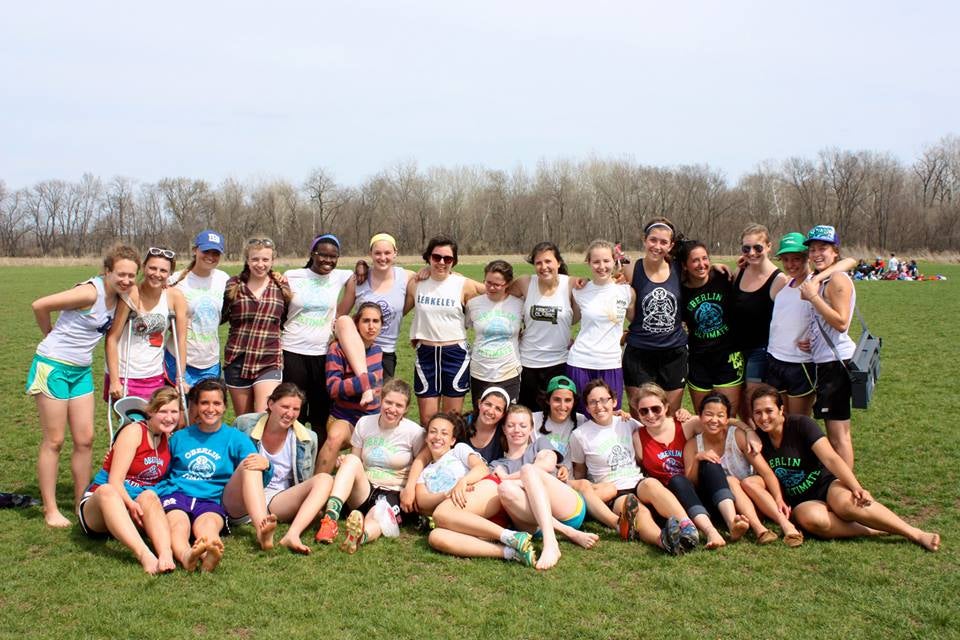 My first year at Oberlin was defined by the team, by long car rides and sharing beds in hotel rooms for tournaments, by late nights huddled around a table that definitely wasn't made for 7 people on the first floor of Mudd, by the upperclassmen who shared a lot of wisdom and a lot of fun with the other wide-eyed fresh-manti and me.

I played on the B team my freshman year, and so thought I knew something about how best to captain it. I thought I understood the psychology of B team: play hard all the time, find victories in places other than the score, watch yourself and the people around you improve more than you would have imagined possible. I still believe in that set of ideas, but captaining this year taught me that a team is not a fixed point; by definition, it's going to change depending on the group of individuals attached to it.

Our B team this year was small; we fielded fairly low numbers to all of our tournaments. At our spring break tournament, we only had 8 players, which required everyone to push themselves in unexpected ways. As hard as it was, that effort also yielded unexpected results - it was one of our best tournaments of the season. I couldn't really do stairs for the following week, but that tournament will always be one of my favorites, and I'm so glad I got to spend it with such a dedicated and scrappy group of women.

Beyond size, however, B team (or Berky Bossums - it's a long story) was and will continue to be full of individuals. In the beginning, I was trying to captain a team that I imagined to be full of mini-Alisons, people who felt the same way about ultimate as I did, and wanted the same things out of their B team experience. It took me too long to realize that everyone had their own sets of ideas, and that making sure all of these ideas were heard was the way to make sure everyone was getting what they wanted out of the team. A group of people can never have a monolithic definition of success; it's always going to be multifaceted, and they have to define it together.

Overall, I think we had a great year. The only game we won was our last game of the season, but that game showed off just how much every single person on the team had learned about ultimate and about how we work best as a team. Despite injuries - if you saw someone scootering around campus with one leg in a cast, that was my co-captain, the inimitable Sarah Blenko - and small numbers, we did what we came to do: have fun and play frisbee. 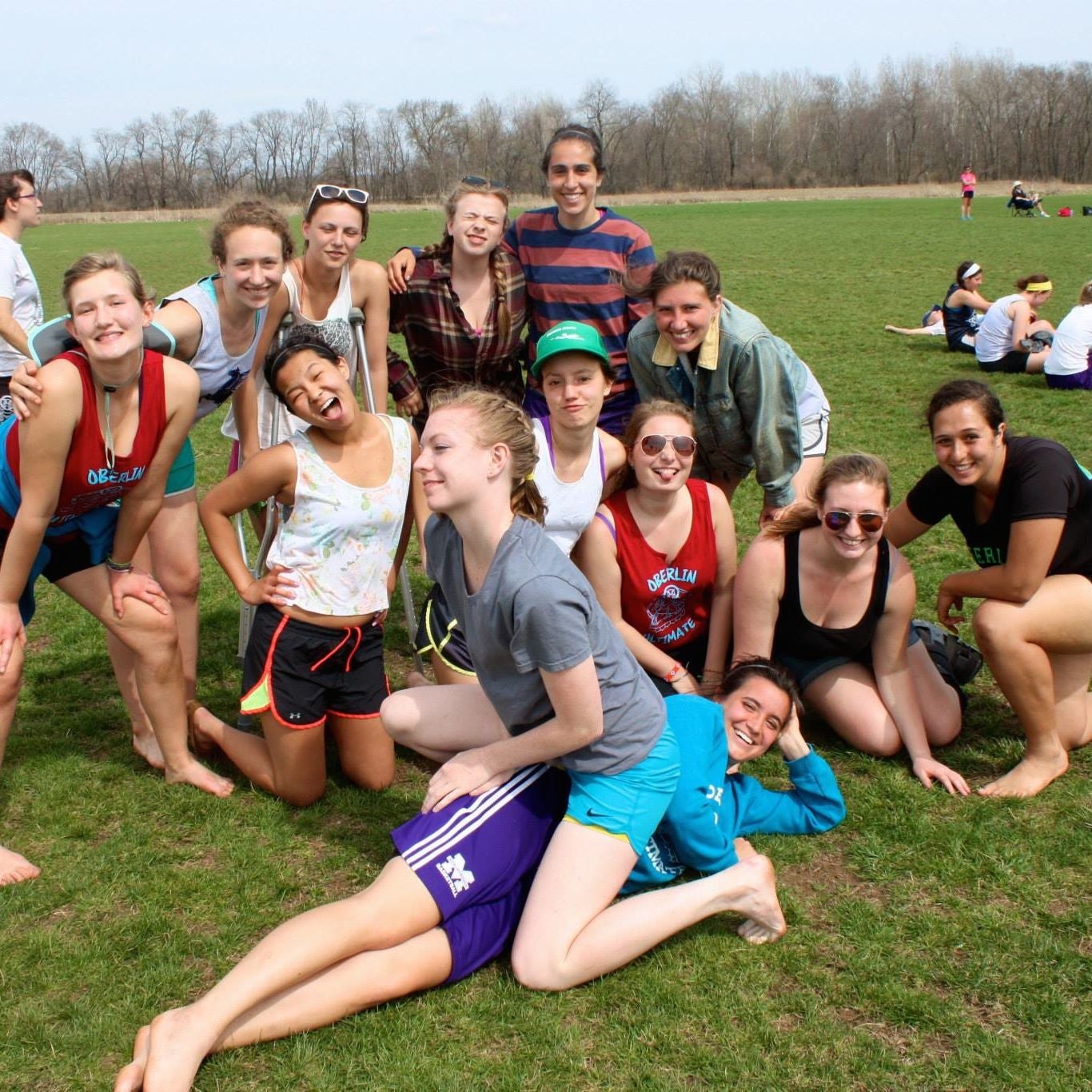 It feels weird, writing a very individualized blog about something that was fundamentally a group experience. At the end of all our tournaments, the Manti do shout-outs, where we go around the circle and mention positive things we noticed about each other during the weekend and beyond. In that spirit, I want to wrap up this blog with some shout-outs for all of the B teamers who made this year so amazing (hint: that's all of them).

To Anna "Butts" Bauman, for an unstoppable attitude and consistently ***Flawless effort (and great tunes!).

To Miriam Bar-Zemer for doing everything asked of her (which was everything) like it was easy and fun, and for enough sunniness for an entire solar system.

To Emma Baxter for the name Berky Bossums (okay, it's not that long of a story: one time she said we should have the goal of being perky possums on the field, and because we're the B team we changed the alliteration) and the mentality to go with it.

To Abbey Bissesi, for ballin' hucks, excellent leadership as a first-year, and always keeping me grounded on the line.

To Anna Droege, for bringing her years of experience and her unique outlook on frisbee.

To Clarissa Guy for catching the uncatchable and making me laugh on the long car ride back from Nashville.

To Cass Hay, for having spot-on ideas about what B team should be doing, and for always coming to practice even though she unfortunately couldn't play tournaments with us (she also is our resident goddess of merch, so if you see someone rocking some Manti swag she's the one to compliment).

To Lauren Kelly for endless laughs and the most positive injury recovery I've ever seen - can't wait to have you back on the field next year!

To Marie Lilly for the beautiful combination of sweetness and persistence.

To Margaret McCarthy for being the embodiment of hard work and positivity, and for always being ready to do an ab workout after practice.

To all the players on the Manti A team for your inspiration, wisdom and love, with special thanks to Rosie Black and Ally Fulton for being great captain role models, and to Zoe Bluffstone, Jess Hubert, and Jackie Milestone for giving great, sanity-restoring advice and being the best roommates in existence.

And last but not least to Sarah Blenko, for showing me what good leadership looks like even when we disagreed, and for letting nothing - even a broken ankle - stop her from always putting the team first.

This has been a long ramble of a blog post, but I find that love and expository precision don't always go that well together. If you're looking for a synopsis, here it is: playing on the Manti has been an unexpected challenge that is always worth it, and B team has taught me more than I could ever reasonably have asked for about how to be a good teammate and leader. I'm so grateful to everyone who's been a part of this experience with me, and I can't wait to see what the future will bring.