This coming weekend is the Dandelion Romp—Oberlin’s annual one-weekend Contra Dancing festival. It’s been pretty much the highlight of my spring semester for the past three years, so in anticipation of all the dancing I’m going to do this weekend, I’m reflecting a little on where this whole dancing thing started for me.

I have never felt one with my body. Intellectually, when it comes to the mind-body problem, I’m a monist—I believe that there is no distinction between my mind and my body. And yet, in practice, I’ve always lived in my head, treating my body as some external object which I have only rudimentary power over, like an awkward puppeteer1. Before I came to college, I was convinced that I was incapable of displaying any rhythm or smoothness of motion. The extent of my social dancing experience was a few graceless school dances.

People who know me now might find this hard to believe. I dance all the time these days. I go to as many dances as I can fit into my schedule. But people who knew me back then can tell you it’s true. When it came to dancing, I was awkward.

My friend Allison periodically reminds me that when we met freshman year in the ‘Sco, I told her that I didn’t know how to dance, but now that I was in college, I intended to learn. I don’t remember what I was thinking in that moment, but I guess I meant it.

The first time I went Contra Dancing, I don’t think I even took the beginner’s workshop they offer at the beginning of each dance, though the charming and beautiful girl who had invited me showed me a couple moves beforehand. For this reason, I tell people that you don’t really need to take a lesson—it’s just one way to help you feel more comfortable on the dance floor. 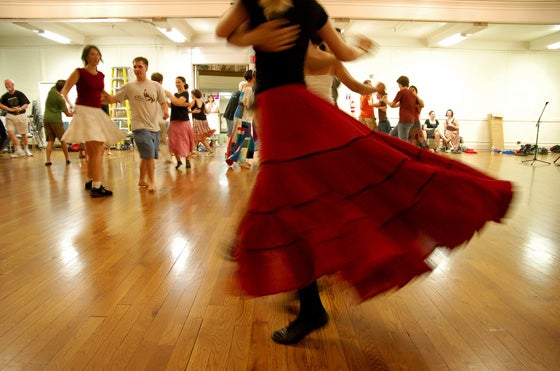 People love to wear skirts while Contra Dancing because they twirl so wonderfully! Photo by Ma’ayan Plaut.

Despite skipping that lesson, I remember the feeling of wonderment that passed over me midway through the evening as I thought, “GOOD GOD, I’m dancing! I am actually making my body move in the way that I want it to.” I still remember the amazement at discovering a dance that I understood—that I was not only capable of, but felt like it came naturally.

Contra is more approachable than blues for most beginning dancers because you don’t have to make things up unless you want to. As you gain experience you’ll find that you can add in plenty of your own flourishes to make things fun, interesting, and your own—but when you’re just starting out it’s sufficient to follow directions.

I’ve progressed3 a lot since that first dance. Though I still feel that body-mind disconnect, it’s less when I’m dancing. I’ve moved from Contra into other forms of dancing4. And in the Contra community, I’m a caller now as well as a dancer, not only better puppeteering my own body, but helping to orchestrate the entire room in dance. 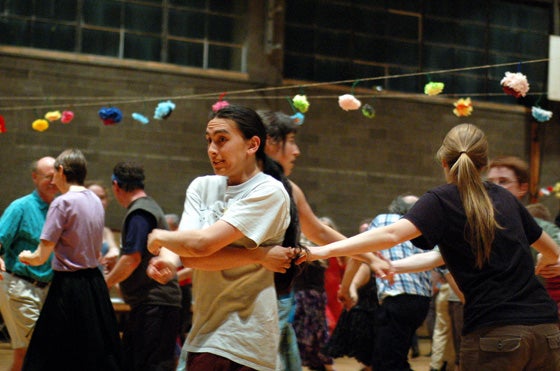 Sometimes I make ridiculous faces while I dance. Also, check out Aries glancing worriedly in the other direction. Photo by Ma’ayan Plaut, from the Dandelion Romp last year.

As part of this role, I’ve also been the instructor for those short beginner workshops (yes, the one that I myself skipped the first time I went dancing) and I’m discovering how difficult it is to explain what Contra is and how it’s done. It’s nearly impossible in words (though I’ve read some very valiant and funny attempts) but even with the people right there and the ability to walk them through moves, I can tell that they don’t quite get it until the music has started and the dance has begun.

My task, then, if I’m not to teach them how to dance, is twofold: 1.) to persuade them that Contra dancing will be an enjoyable experience for them—that they really should stick around after the lesson and try it out and 2.) to make them more comfortable on the dance floor. Once they’re on the dance floor, the dancing will speak for itself.

If I’m not going to explain to you what Contra Dancing is, at the very least I can give you some idea of why I love it. To me, these are the important points of Contra: 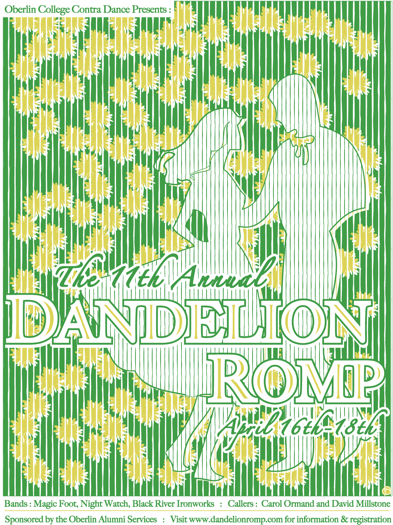 This year’s Dandelion Romp poster. Bet you can guess who made it.

We bring great bands and callers from out of town—who are always outstanding. Lots of out-of-towners come visit for the weekend. Many of them (both the attendees and the musicians) are Oberlin alumni. Some are from such far off locales as Maine, Virginia, and Washington state. One of the band members this weekend is even coming all the way from Ireland!

There will be three dances and numerous dance and music workshops such as “Scandinavian Turning Dances,” “Gender Bender Contras,” and “Shapenote Singing.” If you’re in town, check the website for the schedule. We’ll dance. 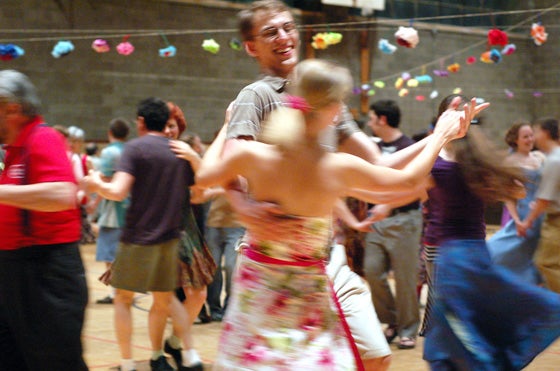 Happy dancers at the Dandelion Romp. Photo by Ma’ayan Plaut.

A wonderful reflection on dancing. I agree that the contra dance community is amazingly warm and welcoming, not just at Oberlin, but anywhere. I am really looking forward to the Romp (What an understatement!)

If any prospective students reading this are going to be visiting April 16-18th, I strongly recommend coming to the Dandelion Romp. It was the highlight of my revisit experience.

You chose some of my favorite contra dancing photos. This year I think I'm absorbed with the design dysprosium for most of it, but Daniel will be there practically the entire time.

And I'm completely in love with the poster this year, by the way.

I loved reading this. Things that involve dancing exude love and adoration :)

When someone asks me what I'm doing this weekend, I'm going to send them this entry.

I didn't start contra dancing until about a year and a half after I left Oberlin, but this captures the experience pretty well.

I am hoping to get back for the Romp one of these years....

Harris, this post makes me so happy. I think that when I look back on how I spent my time at Oberlin, contra dancing will be way up on the list.

Hey Harris, tis I- Tracy from the Flurry. Very cool that you have this blog. We seem to have much in common aside from contra; tea, for instance. I am going to sleep now, since I haven't yet. Later, I intend to read the rest of your blog. So much better than Facebook stalking, right?