I've recently realized that I've been writing an awful lot about what I've done since getting home, but have neglected to describe exactly where "home" is and what it is like.

I live in University Place, Washington, a suburb that used to be part of Tacoma. There isn't any university here--it was considered as a site for the University of Puget Sound, but ultimately that got built elsewhere. The name, however, stuck.

It's a nice place to live: safe, quiet, good public schools. It's also, like most of western Washington, gorgeous. There are two mountain ranges--the Olympics, by the ocean, and the Cascades, inland. (That's why western Washington is wet and eastern Washington is a desert: the Cascades block the rainclouds from going further in.) Having mountains around makes for awesome views. Some days, you'll be driving or walking along and suddenly turn a corner and see something like this: 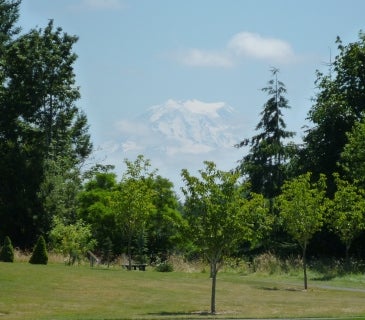 That's Mount Rainier, in the Cascades.

Actually, you can't always see it--sometimes (far too often, in the winter!) the mountains are hidden behind clouds, and the whole thing disappears. Different regions of the country have their own little quirks of speech; Washingtonians will check to see if "the mountain's out."

I'm especially lucky because my family lives three blocks away from a system of trails and overlooks from which you can see this: 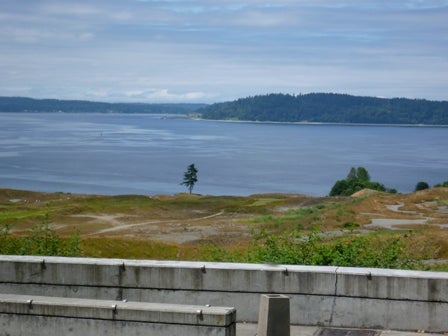 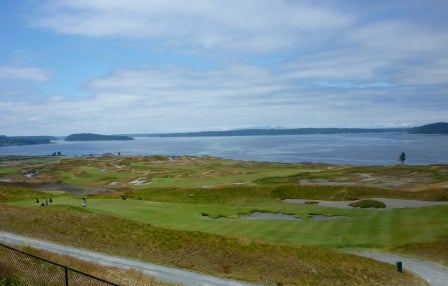 That's Puget Sound and some of its islands, with the Olympics rising behind them. As for the foreground, it's a golf course, and a pretty fancy one, apparently. The U.S. Amateur tournament is going to be held there this August, and the U.S. Open in 2015. Mom and Dad have joked about renting out my room to tourists when that happens. 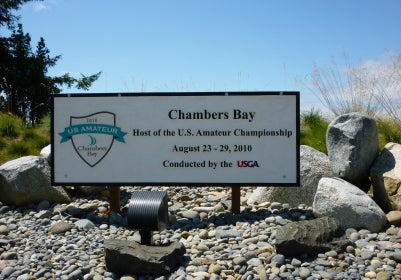 We don't know anything about golf; what we really appreciate is the view, and the walking trail that goes all the way around the course. The hills are pretty steep, but it's a good walk. There's also a restaurant at the south end of the top part of the trail, and occasionally Mom and Dad will just walk there and have a glass of wine or some French fries. 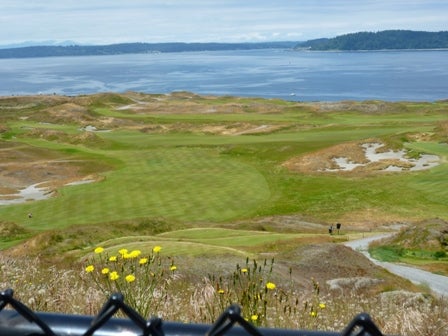 The interesting thing is, all that wasn't even there when we moved in. What is now the Chambers Bay golf course, and the restaurant, and the trails, used to be a gravel mine. It's amazing what they've done with the place. 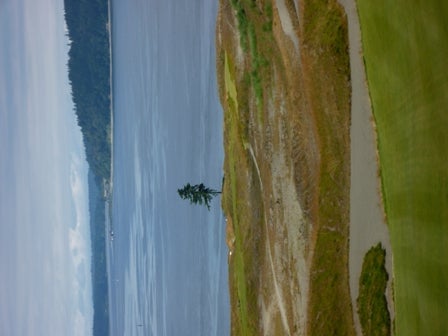 This single tree is the course's iconic image. A few years ago, someone took an axe to it. The tree survived, obviously, but now there's a wire net around the first five feet of the trunk. They never caught the person who tried to cut it. 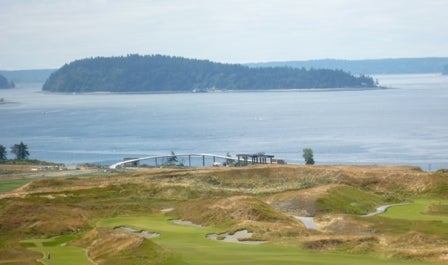 They've already built a bridge over the railroad tracks, which you can see in the photo above; soon, the beach will be open to the public, and that'll be lots of fun. 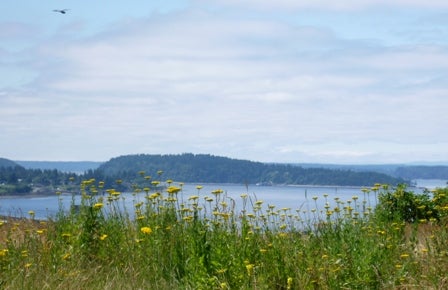 A little past the golf course is the Environmental Services Building and a few fields. If you want a longer walk, or don't want to do the hills, you can walk this way. Sometimes you can watch kids play soccer or Frisbee. 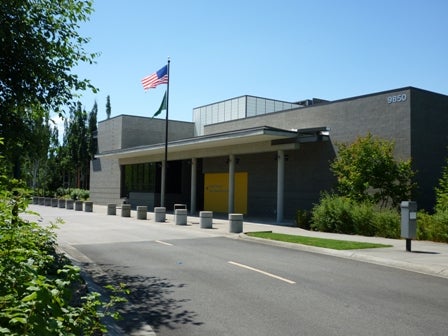 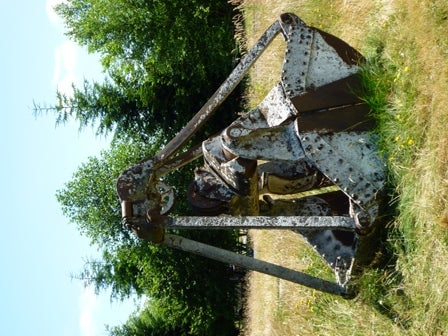 I think this is part of a machine that worked the gravel quarry. It's either that, or some kind of anchor. I really have no idea. It looks nice, though! 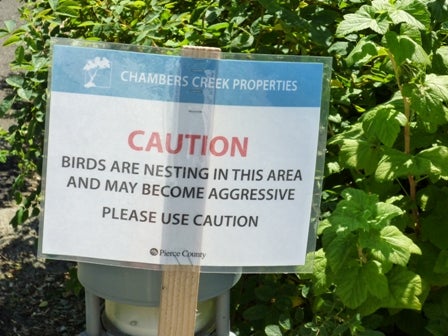 In Soviet Russia, wildlife endanger YOU!

Closer to home, there's a green belt (community forest-y area) behind our house. I spent many happy summer days running around back there, climbing trees, making maple leaf slings, and going on long quests. When I had friends over, we'd chase each other around and occasionally tie each other to trees to burn at the stake.

I had a great childhood.

This is the part of the green belt that can be seen from the deck. 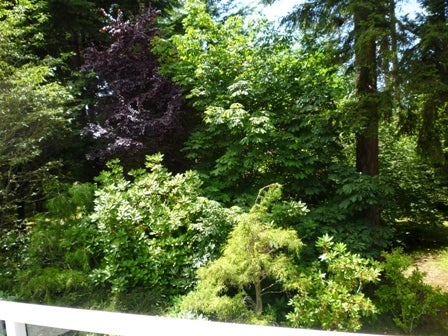 Everyone in my family loves reading. Consequently, our house is filled with books.

There are books in the living room . . . 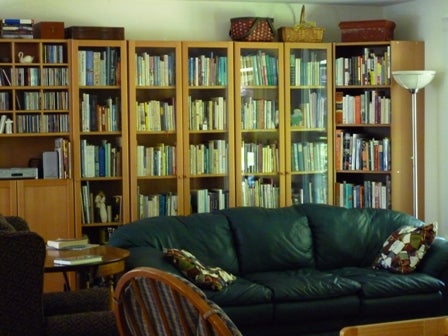 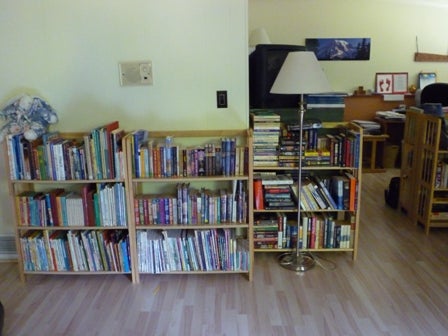 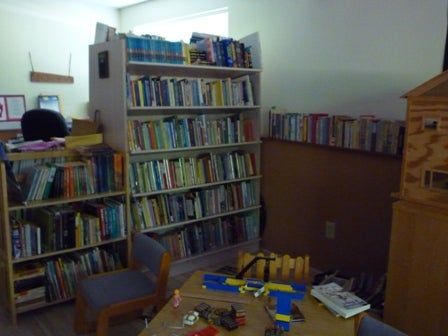 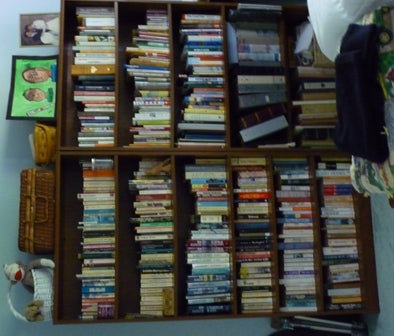 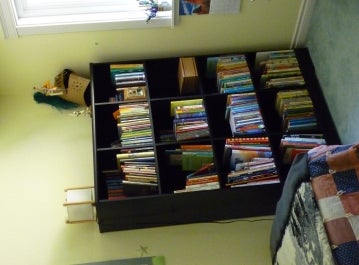 The big black bookcase is new. On some shelves, the books are stacked two rows deep, the back row sitting atop shoe boxes for accessibility. But he still needs at least one auxiliary bookcase. 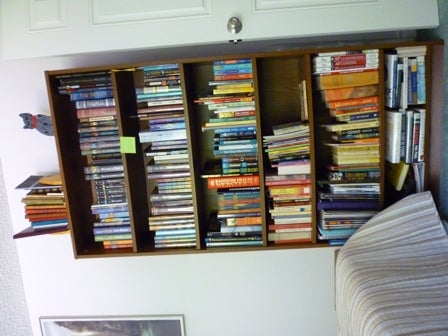 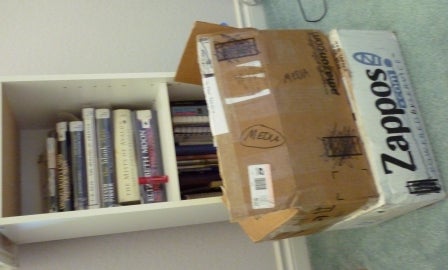 These are library books, as are the ones on the bottom shelf of the big bookcase. However, the two boxes contain books I've brought back from Oberlin that I have not yet unpacked--rearranging things so that I have enough shelf space may get difficult.

Besides that, my mom is a rare-childrens'-book dealer and estimates that she has about 1,300 books in her office. There are books on an enormous bookcase . . . 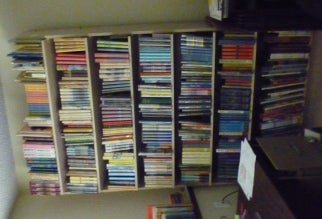 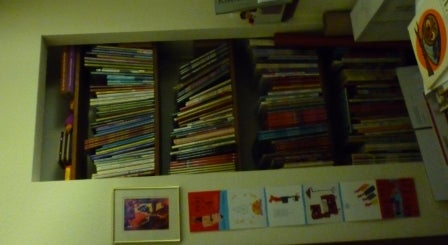 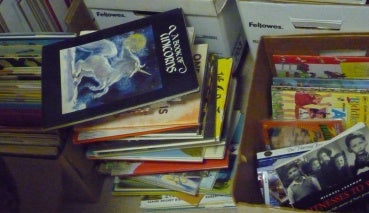 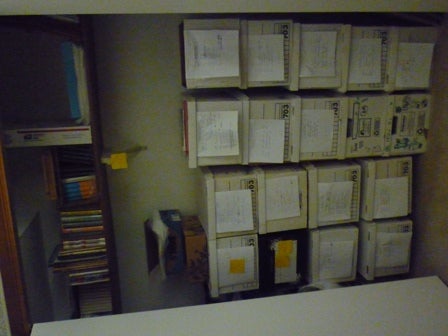 Then there are cookbooks in various locations, piles of library books accumulating on tables and ledges, and special books from childhood stored away in closets. The big gray bookcase in the playroom is actually double-sided, too, and the side I didn't photograph is full of books, journals, and binders related to Dad's work.

All in all, Mom estimated recently, we have around 3,000 "pleasure" books in the house, and well over 4,000 if you count work-related ones. We have twenty-three bookcases, almost all of which are being used for books. (The others hold games, puzzles, and craft supplies.) 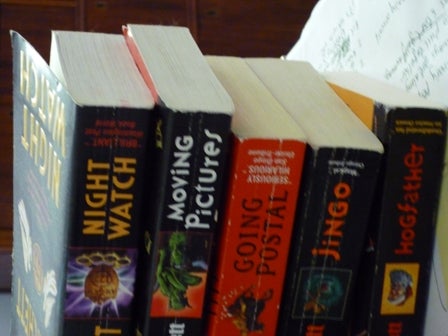 A pile of Terry Pratchett novels on a stand in my room.
People

But home is more than a view and a library. Home means people, and for me, that means my quirky, long-suffering, and much-loved family.

We tend to show affection by merciless teasing, so, less than an hour after I got home from Oberlin this summer, I found myself laughing so hard my sides and cheeks hurt and I was crying. My little brother kindly offered to make me some cranberry oatmeal and put walnuts in it--he knows I like it with walnuts in--and I said yes. He then presented me with a bowl of oatmeal in which what appeared to be a whole, uncracked walnut was floating. (It was actually just half a shell, strategically positioned.) It was brilliant.

My dad is both a hardworking provider and a rebellious influence. One day, when I came home after gardening, I found a long row of library books, mostly hardcovers, stretching across my bed. I had put a whole bunch on hold and then forgotten to stagger the hold activation dates, so most of them came in at once. My brother, who had counted, reported that there were twenty-six of them. My poor, unsuspecting father had gone to the library and found this enormous load, which he had kindly lugged home and upstairs for me. I was most grateful.

I also appreciate his more subversive side. During a conversation one day, I mentioned that I still feel funny watching movies during the daytime--I still have an internal voice telling me not to spend my summer in front of the TV, to go outside and play. I also told him of my plan to see a lot of movies this summer (a goal I haven't been sticking to very well, incidentally). To help me out, he picked up a few he thought I might like, including Top Gun. Mom greeted this news with loud groans--"It's so bad!"--and forbade us from watching it. A few days later, she was off picking up my brother from a sleepover. I was folding laundry when Dad popped up next to me with an excited grin.

"Hey Tess--you ready to break all the rules?"

And so we watched Top Gun, during the day. I kept giggling excitedly at our sneakiness. Then I started laughing in disbelief at Maverick's pick-up lines. Then I began groaning at every line of semi-romantic dialogue. When Mom said the movie was bad, I thought it was an objection to an explosion-riddled action movie. I didn't realize it was because the show was so corny!

Nevertheless, it was a fun experience. And Mom got to say she told me so.

Mom does fun things too, of course, though her sense of humor is harder to write about. It runs more toward facetious comments and skewering insights--conversational things. When I mentioned this to her, trying to come up with good anecdotal material for this blog, she suggested that she remain "the mysterious, enigmatic mother. That's me all over anyway."

And on that note, dear readers, I will leave you to ponder.

Inside, your house is like my old house. I used to joke that the insulation for my room was entirely books, since every wall was lined with bookshelves, all of them with books two deep, and with some that had books stacked on top of books.

All in all, I think we have several thousand in the house. That's what you get when one of the children is a bookworm and the father is a librarian.

Your homeplace is very very pretty. I love all the photos!

TIME magazine featured an article about your golf course! It's a short one but they talked about it being eco and sort of old-style scottish because of the grass it uses, and of course about the open. They had a picture and I recognized the tree right away!