And now we delve into one of the strangest, most exhilarating nights of my time here at Oberlin. 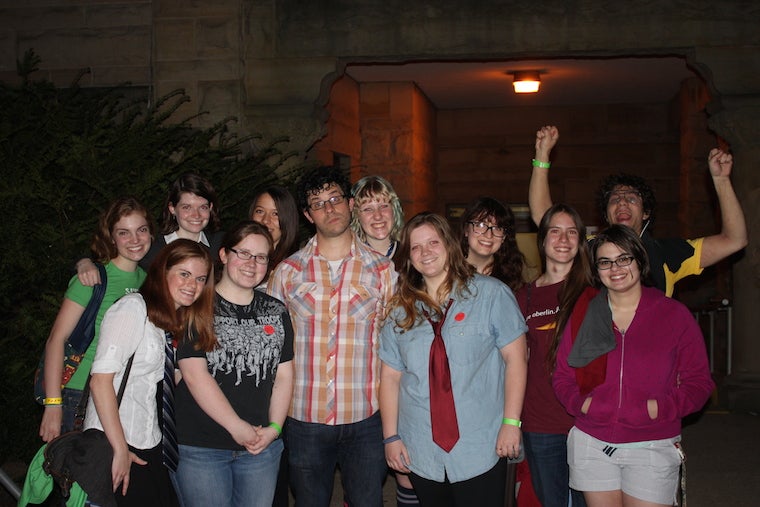 (For those who have no idea what Wizard Rock is, a rundown can be found here.)

To those of us who spend a significant amount of time in the Harry Potter fandom (spoiler: I'm kind of obsessed), this was all hugely exciting. To a lot of people Harry and the Potters are their own brand of celebrity; for a lot of us they were our very first concert. Making sure everyone (including the band) had fun was a big deal to us in the HPA. And we figured it out: Their check was ready, the hotel rooms reserved and paid for, a schedule set up. We even had a scheduled time for them to meet with the Harry Potter ExCo (which I co-teach), where we would all sit around and geek out, all the while analyzing the Harry Potter phenomenon through the lens of literary analysis and sociology. It was gonna be awesome.

And then. And then.

And then came the actual day.

Here's a rough timeline of what went down on April 12th, aka Harry and the Potters Day:

Noon: I check my email and see that OHPA's events coordinator (let's call her K) has written to inform me that the band is running a little late on their trip from Bloomington to Oberlin, so they'll probably be arriving on campus around 7:00pm instead of around 5:00pm. (This is important because I'm the one scheduled to guide them around campus when they first arrive)


5:20pm: K calls in a panic: "HARRY AND THE POTTERS' CAR BROKE DOWN IN COLUMBUS." "WHAT. NOOOOOOOOOOOOOO." "MEET ME AT THE 'SCO IN FIVE MINUTES."


5:30-6:30pm: This time is mainly taken up by us panicking, as well as going about the restructuring of the day: Rearranging things like sound check with the people who run the 'Sco, etc. Mainly panicking, even when we didn't really need to. This is also when I talk to Paul DeGeorge (Harry year 7) on the phone and we arrange to push the meeting with HexCo (Harry Potter ExCo) from 7 until 9. I email the class to tell them of the change.


6:30-6:30pm: They call back saying that it's their alternator that's malfunctioned and that, well, they have to go rent a car in order to get here. Can't imagine what a long day it's been for THEM at this point. Estimated time of arrival pushed back to 10pm at the earliest, 10:30 (after the opening band--the awesome Crispin Swank Sextet--goes on). HexCo event canceled. Sadness.


6:35pm: I realize that this rapid chain of plan-changes means that I can go to the Oberlin pre-screening of the new HBO show Girls (written by, directed by, and starring Lena Dunham, an '08 Oberlin grad). I am enthused.


9pm-10:00pm: Hang out in Decaf with K and Jenna (our OHPA leader). More HPAers and HexCoers show up. We commiserate about our strange fate that night. We spend some time looking at each others' tumblrs and screaming at each other about our fandoms (in a friendly way). This is why I love them.


10:45pm-12:30am: The actual concert. Practically a religious experience. The fact that I go to a school where that entire audience knows all the words to Harry and the Potters songs makes me really happy.


1:00am-2am: We get to hang out with the band. We head to the Feve, the main bar in town. Some kind person buys them drinks. My HexCo co-instructor, Kellie, gives them S.P.E.W. badges. It's a good time.


2:15am-2:45am: The bar closes, so we stand in Tappan Square for a while and just chat. A lot of jokes were made about Philadelphia, and the band says they want to make this an annual thing. YES, PLEASE.

Then we all parted ways and us HPAers were left reeling because WHAT THE EFF JUST HAPPENED THAT NIGHT WAS SO COOOL.

I'm so glad that you posted about Harry and the Potters! It was a crazy night for me too (I was kind of sick, I was supposed to go to a cappella rehearsal, I had a ton of homework) but I pushed it all to the side for about an hour and a half so that I could go to the concert and I don't regret it at all. The words "practically a religious experience" sum it up perfectly.

And if they made this an annual thing, oh boy, I would be overjoyed! I ended up going to the concert by myself, which was awesome, but I would love to see them play with friends.

You are all my favorite and most adorable nerdz ever.