This fall, Kris Surovjak, Associate Director of Admissions, biked her way across the Pacific Northwest to meet with students, alums, and high school counselors. We talk a lot about environmentalism and stewardship at Oberlin, and this is an amazing example of what that can look like for a job that requires tons of travel. So, take it away Kris!

This is something I've been thinking about for a long time. After 14 years in Oberlin, the environment is something almost always on my mind. Here, we walk and bike most places, turn off lights, unplug chargers, recycle, compost, etc. So my fall travels—which generally include renting a car and driving around most of the day, staying in hotels, and eating in restaurants—have always felt sort of shocking and incongruent. I've tried for years to reduce my environmental impact while traveling. I've done this in small ways over time, but eliminating my vehicle use completely was always my personal Grail Quest.

So I decided to start small and rent a bike instead of a car in Portland. I've got a couple Oberlin alumnae friends in Portland, Amanda Duncan and Caitlin Reid, who for years went without a car. I've always found the city's endless bike racks and bright green bike lanes alluring. And the riders that fill those bike lanes? In a word: badass. Strong, owning the road—like Mercury, but with wheels replacing winged sandals. It seemed a feasible plan, but Portland is a big city with lots of traffic, mercurial weather, and more extreme topography than I am used to. I was pretty nervous about it, but I felt this was something I needed to try to uphold my own values. And it might be a chance for me to start a small, environment-positive trend. (Fellow admissions officers and business travelers of the world... it was great! You should try it, too!)

To that point, though, I am fortunate to work for a school I was confident would support me in my efforts (we defy convention, you see). Oberlin, with its environmentally sustainable ways, enthusiastically granted approval. So, I began planning my trip. I knew this would be much more physically challenging and time-intensive than my normal, 4-wheeled travels, so I set the following ground rules for myself:

I scheduled four days of visits in Oregon, split in half by a week in Washington, to which I would travel via Amtrak train (which was another adventure, but more on that in a little bit). At any rate, I reserved a bike from Veloce Bicycles in SE Portland, and set to preparing for my trip.

One of the early realizations I had as I was packing for my trip was this: Humans use a lot of stuff. Portability was a priority, so I packed into a 45-liter backpack. Do you know how much fits into a 45-liter backpack? Well, I'll spare the details, but suffice it to say: not as much as fits into a suitcase. Eventually, there were a few key luxuries that had to be eliminated, including hiking boots (tragedy!), reading material (horror!), and any extraneous clothing (damnation!). It's a lucky thing that I rarely see students more than once or twice on these visits, because the number of times I wore the same outfit was kind of embarrassing.

There were several moments of self-actualization for me on this trip, one being that I am a little bit vain. I felt boring and unfashionable wearing the same clothes time and again, and as far as bike helmets go, they totally crush your hair. But environment wins over style and, to adhere to Rule #2, the helmet was crucial. So I pressed on, rumpled of accouterment and flat of coiffure—and that was before it started raining. 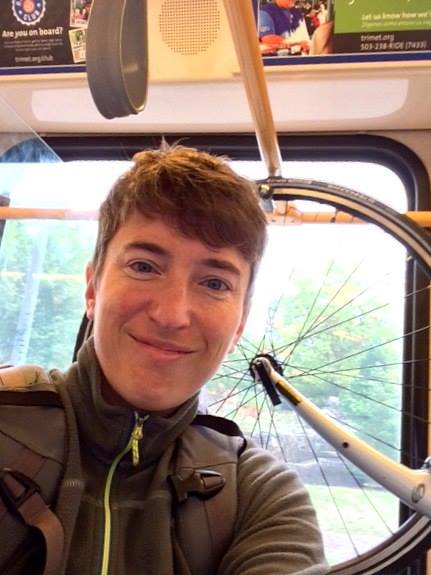 Riding the Blue Line with my rental bike

But the thing I most appreciated was, even when I arrived at a high school dripping wet (and with a mud stripe up the center of my back. Next time: fenders) from a rainy ride, no one judged me. In Portland, biking is part of the culture. It is a very different paradigm from the way most Americans think about transportation, a paradigm I hope more cities embrace soon.

And while I'm at it, I want to offer my heartfelt thanks to the administrative assistants at Woodrow Wilson, Riverdale, Lake Oswego and Lakeridge High Schools, who, when I forgot my bike lock key and carried my bike into their lobbies, didn't even bat an eyelash and found me a place to stash my bike during my visits.

Riding a bike allowed me to connect with my physical environment. Biking up Terwiliger Boulevard towards Woodrow Wilson High School early one morning, I looked off into the forest and standing not 20 feet away was a coyote, watching me with bright eyes. And pedaling up the hill to Catlin Gabel School, the scent of fir trees was intoxicating! I felt much more present, and much more connected to my surroundings.

I also fell madly in love with the "bike boulevards," surface streets in Portland that are open to car traffic but have frequent speed bumps so cars avoid them. I would sometimes ride 3 miles without encountering a (moving) car. Additionally, there were two bike/pedestrian-only paths I happened upon: the Fanno Greenway in Beaverton and the Terwiliger Bike Path near Lake Oswego. It was a nice respite to be completely removed from the automobiles, but I did nearly pitch headlong into a ravine while I was taking in the beautiful scenery. 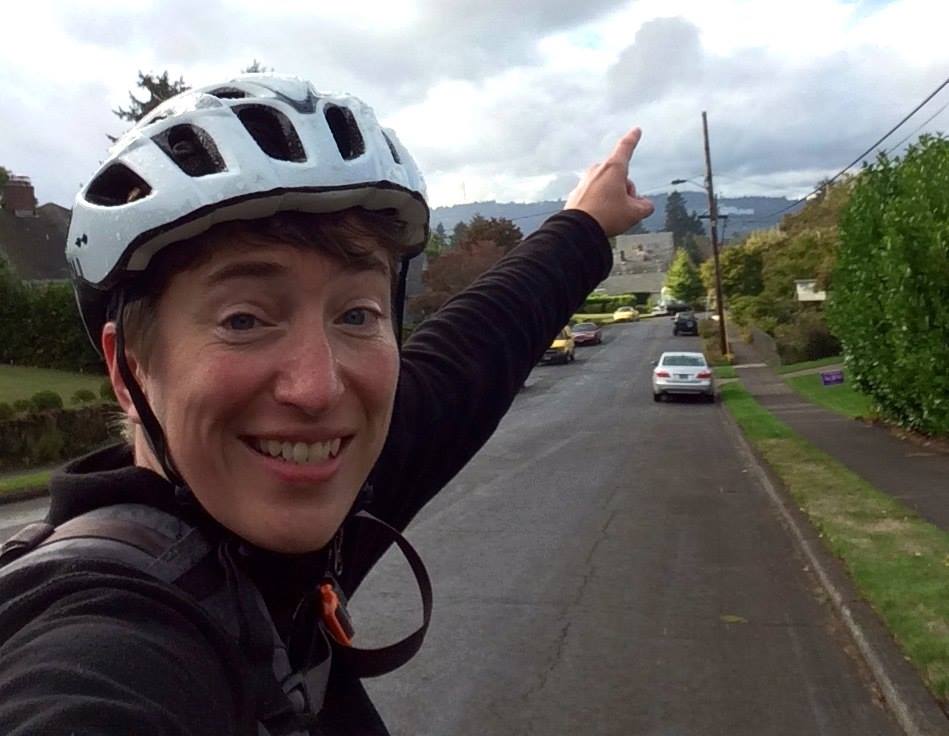 A patch of sunlight in Portland!

One of the circumstances that pleasantly surprised me as I utilized the public transportation in the city was that I was able to really connect with my fellow commuters. Several strangers helped me look up bus routes and turned me onto a handy bus app for my phone (who knew you could get up-to-the-minute info about when buses arrive at every stop?). Bus drivers were patient with me as I fumbled securing my bike on the rack on the front of their buses. These interactions bolstered my faith in humanity.

But as great as mass transportation is, it is time-consuming. I became very aware of how quickly a car gets you places, and how much stuff you can tote around when you're driving one. My patience and my need to be over-prepared for every situation were both tested on this trip. But I transcended, and found my Zen on bus routes #9 and #75.

In one of my most stressful moments, I nearly missed my train up to Seattle. I didn't allot enough time for the bus ride, and I was really surprised that the bus I was on didn't actually stop at Union Station—which was a significant time delay as I was lugging my (oh, that's why they call it...) luggage. I did manage to make it onto the train with a few minutes to spare, and the ride was comfortable enough. But the station at which I was dropped off was equally remote.

Want to know what's near the Amtrak Station in Tukwila? The Amtrak train.

Before it pulls away.

I was there, at the station, all alone, waiting for a bus that comes pretty infrequently. And it was dark. And I couldn't stop thinking about Twisty the clown from American Horror Story. And at that moment, I really started to wish I had flown or driven up from Portland.

But, Rule #3. So I waited nervously for the bus, which eventually arrived, and dropped me off a mere half mile from my final destination. I walked. Still, this was in the dark, but now also in the rain (again with the ruined hair!). In thinking back over this experience, I was struck by the juxtaposition of the airport, with door-to-door service and moving walkways, and the train station, which was far less accommodating. Might be that if it was more accessible to take the train, more folks would. Just a thought. 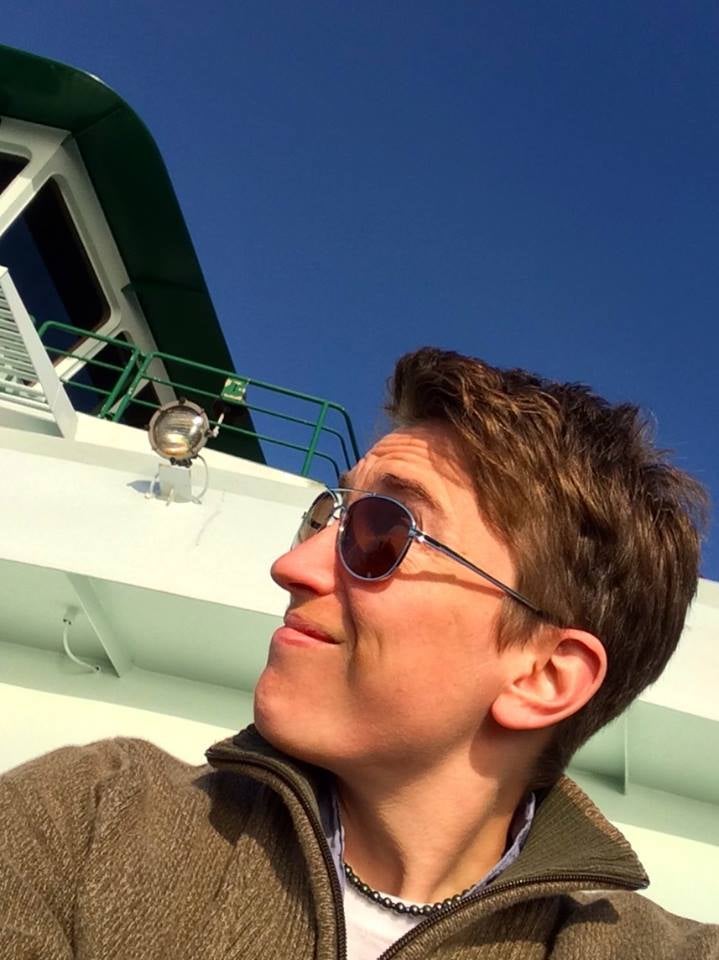 But all in all, this was a successful experiment, one that I will repeat and hopefully expand upon in the future. After having done it, I can say that during the planning stages, it felt like a much bigger, more daunting deal than it actually was. So, friends and colleagues, consider the gauntlet thrown down! I'd encourage all travellers to give it a try. The personal satisfaction I felt far outweighed my initial nervousness.

And, really, the only person who knew my hair was super-flat was me.

The PDX bus app + the TriMet app are total lifesavers.

Also, you are such a badass and I like everything about this post except your helmet hair (just kidding, helmet hair is a badge of honor).

Did you get to meet former blogger Ida in Seattle?! I heard from a little bird that she might have been there!

I thought I was good in NY where I only walk or take subways and buses, but you've taken this to a while new level. You're my hero!

Did you discover the app. Next bus? Because that app was my favorite thing ever in LA. Also, I'm so happy you have joined the bike touring club! It is one of the best clubs. I must say, it is very tricky to carry college materials on a bike, but doable. I'm so proud of you and Oberlin!

Ma'yan... I DID see Ida... she was super cool and totally Oberlin (she biked to the event). I even took a picture with her, I'll send it to you.

Liz, the app I found was just called "PDX bus"... it was free, and it even had the Max LIne stops and times. I am never taking if off my phone.

Kris does such an awesome job representing Oberlin and its values.