Last week, it struck me that I was leaving Oberlin. It wasn't a casual realization. It was more of a whiplash-spasm, ice-down-my-shirt surprise.

Home is a big deal to my family. I was born in Point Reyes, California, and though we left when I was six for the east coast, my family never really got over it. California was their first love. She was their everything. And despite the practical marriage to New York, their hearts were still on Route One, watching the whales from Point Reyes Lighthouse, drinking Strauss Family Milk, and hiking Mount Tam. New York was a house, but not a home. California was Old Country.

Neither of my parents was born in Point Reyes — my Dad from Brooklyn, my mom from Bergen, Norway. Point Reyes was a place they made their own. They made music on porches, home-cooked meals, small businesses; they befriended everyone in town, and created a community who babysat their daughter (even though little-Aries nibbled on furniture). Home was national parkland, organic farms, deer, getting married on a mountain, day trips to San Francisco. When I walk around my parents' town and introduce myself as "Arthur and Elisa's daughter," I get huge smiles, hugs, and free cookies from strangers. Even when people leave, it's still their home.

And Oberlin is my home.

And leaving Oberlin in the summer is like ditching your bride during the honeymoon. Though it's mocked in musical theater, summer in Ohio is the picture-book definition of bucolic. There are fireflies everywhere at night, blue skies and sun by day. There's bike-in movies, Feve dance nights, Hash House Harriers running club, family movies at the Apollo, concerts in Cleveland, and endless time. There are no deadlines. No demands. 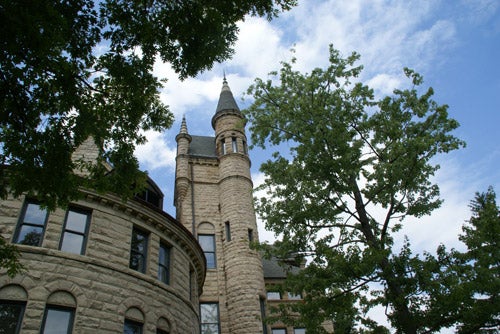 Oberlin in the summer, lying down on the grass in front of Peters. Mr. Blue Sky in full force.

When I was a high school junior, I took out Colleges That Change Lives from the library and read it cover to cover. Until that point, I'd really thought only about prestige. How someone would look at me differently when they found out where my diploma was from. They'd give me the second interview, the handshake, the inevitable contract. Or they'd just see me as a smart, successful person. When I visited colleges, I was confronted with the reality that I would live there. It would be my home. It would be where I spent my weekend, where I dated, where I made friends. It would be my little world. It would change my life.

Of course, I would change my life at college. But the transformation Oberlin offered seemed to be the best of all possible worlds. At Oberlin, the world was technicolor. There were so many new ideas and so much passion. I felt like Dorothy in Oz: lost but enraptured.

But not initially. My first semester wasn't graceful. I didn't really bond with the other folks in my hall, the way everyone else seemed to. I took a lot of long walks. I worked at the George Jones Farm: weeding, harvesting, and exploring. Tried to continue my three-year relationship with the High School Boyfriend over long distance. I sang in three choirs, signed up for too many excos, and flitted from place to place, trying to do everything. I didn't have many close friends, but I gained a huge pool of acquaintances. Needs for sleep or food didn't stop me. I was a little moth, drawn by the brightest light.

When you buy a home, you repaint the walls. You tear out ugly carpeting to show off hardwood floors. You buy furniture and put up posters. You bake bread, light fires, wash your clothes with new detergent. The house starts to smell like you.

Halfway through the year, I switched dorms, from my distracting first-year dorm to a more relaxed all-year dorm. My new roommate was incredibly cool: a Neuroscience and Art History Major from Arizona. She told crazy stories, exuded calm, and had a lovely romance with a beautiful Russian major, who was our sort-of third roommate. I started doing improv theater, I joined the circus, I shaved my head. I broke up with my high school boyfriend. I started eating and sleeping regularly, and began to trust my friends. I dropped two choirs, and figured out how to pass my finals with a shred of dignity. 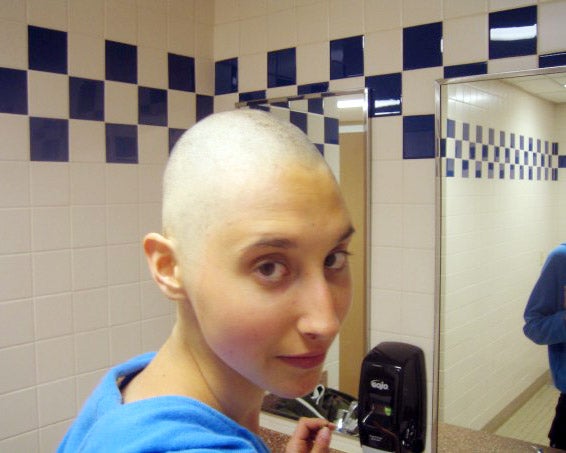 For an explanation for why I shaved my head, go here.

My long walks became longer jogs, letting me see more and more of the little town. It never bored me. I never ate in a co-op formally, but if I stopped into Harkness or Keep for pizza night, I had an endless number of folks to sit beside. I did some of my homework in the Cat in the Cream, so I could absorb some of the jazz combos, even if I didn't have time for every concert ever. I gobbled up what my professors said, even when it confused me. I saw my friends as my professors: they taught me how to play taiko drums, how to dance, how to analyze a scientific publication, how to clean an industrial kitchen, how to appreciate new music.

In your home, you can find your way to the sink in the dark. You know that the front door will always slam in the wind. You figure out how to work the stove, and which windows to open to make the house stay perfectly cool. When you come home, you wear a sweeter smile.

I feel totally comfortable in Oberlin. I feel safe. I don't worry about homophobia or sexism. I don't worry about personal security, the way I had to in New York. I can go running at 2AM here, without fearing for my life. I can smile at strangers. I can ask for help. I can trust my friends. I can be myself.

But college changes you. The ideals of Oberlin have dug into me — values that I'd always quietly respected were suddenly obtainable. I'm a pretty simple person: I want to make the world a better place. I want to fix things. I want to help the underdogs win the day. I want to be constantly learning, working, improving. I'm not as smart as I thought I was (when I was 16), but I'm a lot stronger.

Oberlin gives you a ferocious need: a need to make each day better than the last. Whether that's by creating new art and music, researching the amount of pharmaceutical products in the reservoir water, fixing muscular aches, repairing spiritual pains, or teaching people how to get out of the worst scrapes with a clownishly-wide grin... we want to make things better. The friends I made — who became my professors and my family — they stay with me, in cities across the world. 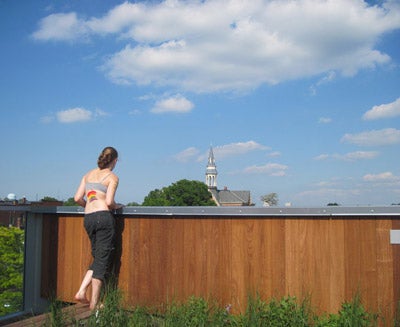 Miriam, on the roof of the Kohl building. Photo Credit: Carolyn Michaels.

i'm an alum who graduated in '07 and i totally feel you on this. oberlin was the most special place i've ever lived. i'm in nyc and life is so lacking in the very community-based *homey-ness* you're describing. but that's why, i suppose, i hope to some day make it back there to teach.

anyhoo, this was very moving and fills me with truly wonderful nostalgia for the first and only place i've ever really felt at home in. you're right, the summers are bucolic (though i always said idyllic). leaving was hard, but i cherish the time i had there. i only wish i'd taken even more advantage of it! to oberlin!

suddenly every single penny we spent on your education just became worth it. I knew it was a few years ago but this drove it home with a passion. Thanks for sharing, your hippy Dad...

I can only second what Tristan wrote, you summed up beautifully what makes Oberlin a special place.

Leaving is hard. You'll have a friend wherever I am, for what it's worth.

It gets better, too, the longer you're away - you find pockets of what you miss, and you find important things that need to be done in other places. It gets better.

I loved how Oberlin was a Safe Space, and how I could be totally relaxed. (Not everyone felt that way, but I definitely did.)

I'm a pretty simple person: I want to make the world a better place. I want to fix things. I want to help the underdogs win the day. I want to be constantly learning, working, improving.

Aries, you can't leave! I wuv you! STAAAAY!

i'm about to enter oberlin and this post has made me sickeningly excited.
you're an amazing writer, thank you for sharing this wonderful little window into oberlin!

I have been following your blog for almost a year now, and over this time I have grown to know and admire you as much as I do any of my close friends. Having said all that, this post nearly brought me to tears. I am so impressed with your strength and courage, and I can only hope that if I attend Oberlin it will allow me to grow and flourish half as much as you did. I will miss your blog posts immensely, but I will always be grateful for the insights to life, love, and learning that you graced me and so many others with.

I don't know how to find a community like this. I think I'll be spending a large portion of my life trying to build my own mini-Oberlin.

Thank you so much! This place means a lot to me-- I'm happy that other people will be able to enjoy it and make it their own.

Aries, this is a powerful and beautiful post that struck home.

Your shaving your head held the strongest message for me. The act is both a declaration as well as an emblem: that Oberlin does indeed give each of us a place to be who we are. Or, to create who we are, find others like us, and give to society in our own way. What more, it being a "souvenir" of sorts from your volunteer work at New Orleans, that makes you an epitome of the perfect Obie!

After all, like you said,: "Oberlin gives you a ferocious need: a need to make each day better than the last. "

All the best of luck Aries, and keep in touch!

Aries, this was beautiful.
That's all.
thanks

Moving Back to Oberlin ... During a Pandemic

I am welcoming my second year at Oberlin, COVID-19 pandemic edition, with open arms!

A glimpse into what traveling during this pandemic is like.

Oberlin students are innovators that not only adapt to situations but also change them for the better.