I never intended to play field hockey in college. I didn’t even know that field hockey was a sport until I started high school and my friend Nadine came up to me one day saying “I want to try out for the field hockey team but I don’t want to do it alone. Want to come with me?” I had never thought of myself as a particularly athletic child—I fit more into the archetype of ‘kid-reading-under-a-tree-during-recess’—but I decided to try out field hockey and see if I liked it.

I started as a goalie, mostly because I was scared of running and so didn’t want to be a field player. While adjusting to a sport was difficult, I enjoyed it enough that I kept up with field hockey throughout high school, and transitioned to being a field player starting in my sophomore year. Even though I got a lot out of the sport in high school, though, I didn’t really want to play it at a competitive level in college.

That all changed when I happened to sit down at the same table as the then-field hockey head coach at All Roads, the admitted students weekend in March. She told me that the Oberlin team was really close-knit and that it was worth it to try out field hockey. After all, I could always quit if I felt it was too much. After this conversation, I thought about it some more and decided to be a walk-on (as opposed to being recruited) to Oberlin’s field hockey team.

The first two weeks of pre-season were grueling. I specifically remember being at a 7am practice and looking up at the sky thinking “Why am I here? Why did I agree to do this? I just want to go home.” It was scary, lonely, and overwhelming. I was friendly with most people on the team, but I intentionally didn’t get too close to anyone because I wasn’t sure if I was going to continue with the sport. Throughout my first, and even much of my second season (which wasn’t really a season because of COVID), I started to enjoy the team dynamic more but still was hesitant to fully commit to the sport for my college career.

Starting in my third year, I began to get closer to my teammates and, at a certain point, felt sure that I was going to stay on the team. There was no specific moment when I became sure of this fact—it was more like an acceptance of the position I currently existed in at Oberlin as a college athlete and someone who felt a sense of support and camaraderie from my teammates. My third season was really, really hard—due to coming out of many COVID semesters and being burnt out from the pandemic and school work, there was a general sense on the team of tiredness and stress. We all knew that something could be better in the way we played and existed as teammates but, at the same time, we felt like no one could voice that.

Now, I’ve just ended my fourth and final season of field hockey at Oberlin. It’s been a blur of practices almost every day, the feelings of intensity and pressure before and during games, and bonding with my teammates in a way I never fully had before this season. I’ve been through some tough, personally challenging situations so far this semester, and I’ve reached out for support from my team and my coach in a way that I was scared to do and never had before. It was daunting, but in doing so I feel closer to them and so genuinely supported. I also feel like I can support them all better now too.

Speaking as a college athlete, it’s hard sometimes to explain why it’s been ‘worth it’ for me to continue participating in sports. Many of my friends only hear the bad parts, like getting back at 1am from a game we lost badly and feeling so, so tired and frustrated. But it’s the good parts of Oberlin field hockey that have made it worth it for me. It’s the long trips—having dance parties in our hotels, commiserating when the AC went out on our bus my first year, going for morning runs and having hotel-breakfast waffles to look forward to afterwards. It’s the support, both academic and personal, that I’ve gotten and given over the years. It’s the team bonding activities like pumpkin carving and absolutely losing it over stupid jokes we all remember over the years. Most of all, it’s the sense of having people who, from day one, have your back in a way that only a family can. And that’s what OCFH is to me and to, I hope, all of the people on the team: a second family. 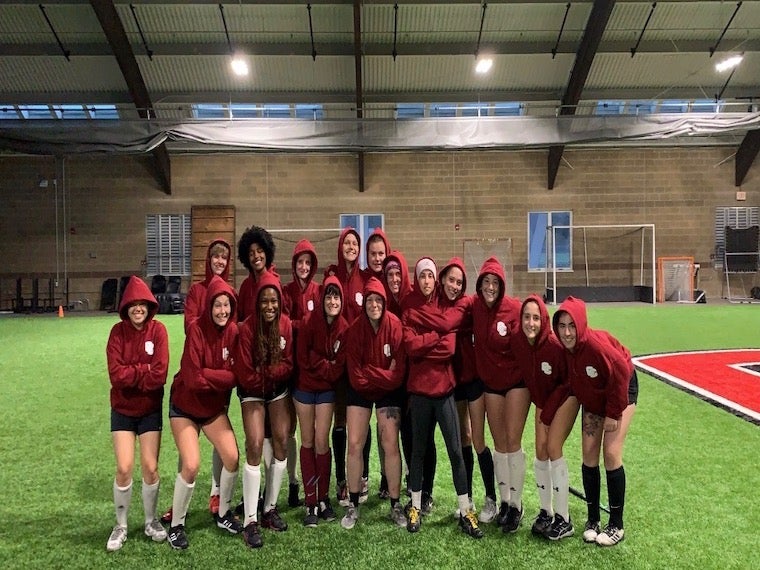 Mer! Honored to be your teammate, friend, and consider u family. Much Love