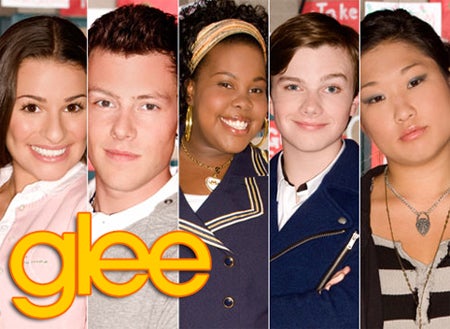 Note: these images used entirely for fun and without permission. I'm probably not supposed to use them at all, much less in combination. Oh well.

Hold everything! This week's blog is not going to be about bathroom graffiti after all. It's going to be about musical theater--or musical television, I suppose. What prompted this change in subject? I recently watched all thirteen episodes of Glee with my family.

For those of you who don't know, Glee is an enormously popular new TV show about a high school glee club (a musical group) that combines sitcom humor with a soap-opera-esque plot and frequent musical numbers. Apparently it's an especially huge hit in New York, with Broadway stars gathering to watch it after their own shows. It's not great art--the characters are a little inconsistent and the plot is a tad bizarre--but it's fun, and the songs and dancing are pretty impressive. However, in the show, the members of this glee club are (mostly) treated as weirdo outcast losers by the rest of the students at William McKinley High School, despite their amazing talents. To make matters worse, funding for the club is in jeopardy, or at least it was for the first few shows. So our plucky band of misfits sets out to prove their worth by winning a series of glee club competitions. As of now, they've won sectionals, the first step towards the national competition.

So, you might be asking, what on Earth does this have to do with Oberlin? Bear with me for one more paragraph . . .

William McKinley High School is located in the town of Lima, Ohio, which apparently isn't a very desirable place--the insult "Lima loser" is used a few times in the show. One of the main characters, Finn, discusses how he hopes to get either a football or musical scholarship to college in order to expand his horizons. Lima is, after all, in the middle of Nowhere County, Ohio . . .

That means that there's an excellent college--and conservatory--located only a few hours' drive away from Lima. (According to Yahoo Answers, it only takes about four hours to drive across the whole state.) Suppose that Oberlin heard about a group of very talented young singers who won a local competition? And suppose that they invited this group to come tour the college, meet some voice majors, get some advice? What an opportunity for the kids! What a chance for Obies to strut their stuff! And who knows, maybe some of the glee club members would be inspired to apply for admission to the Con!

It's a good idea in the storyline: a real adventure for the characters and an affirmation or realization that this singing thing could be worth looking into seriously. It's also a good idea in real life: the show's producers get to expand their scope and Oberlin gets free publicity to its ideal target audience of smart, artsy teenagers. It'd also mean interaction between the writers, actors, director, producer and other television personnel and enthusiastic voice/theater/cinema/writing majors. Inspiration and ideas would be flowing in both directions and students would be making vital connections that could help launch their careers just as much as Oberlin could help launch the characters'.

So here's my proposition. Oberlin has a lot of alumni in the entertainment business--a lot. Some examples: Jim Burrows was/is involved in producing and directing Cheers, Taxi, Friends, Will and Grace, and Big Bang Theory, among others. Ed Helms plays Andy Bernard in The Office. Julie Taymor directed the Broadway musical of The Lion King. And, if the movies haven't steered me wrong, everybody in the entertainment industry knows everybody else, or at least pretends they do. Why not use this formidable alumni network to push some ideas towards the writers and producers of Glee? Mention it to a friend over dinner--shoot an e-mail off later--touch on the feasibility during a phone call--it wouldn't be that hard. Once the idea started circulating, it'd take on a life of its own.

It isn't just alumni who have connections, either; students here know people who know people as well. If those parental and internship-related networks were also utilized, I think we'd have a serious chance of making this happen.

Of course, I'm not sure what the story would be once the characters got here, but I have a few ideas. Maybe they come because one or two people have already decided to audition for the conservatory, and that would be the focus of the episode. (Note: I don't know what grades people are supposed to be in, so don't flame me if this is impossible!) Maybe the regional tournament--the next stage in the competition--turns out to be held at Oberlin. Or maybe they all just bus out to see their teacher's girlfriend's cousin's senior recital. Perhaps theater majors could play minor characters. Possibly part of a real Oberlin performance could get into the show.

But Oberlin wouldn't have to be the focus. It's a great place for all sorts of complications to develop. What if Finn and Rachel have a long, romantic walk in the Arb, or someone pushes Sue Sylvester off the top of the Observatory (I'd do it), or Quinn gets startled by an albino squirrel and goes into premature labor!? (Just kidding.) (Maybe.)

Got any brilliant ideas? Post your plot outlines, useful contacts, or other comments below! Let's do this!

Oh, and I have to add: this whole thing was originally my mom's idea. The credit, or blame, is all hers.

Not even an hour ago I made a reference to Glee in an admissions interview! I was watching an episode the other day myself and was a little surprised that Finn is so focused on getting a scholarship so that he can go to college. In Oberlin's Financial Aid world, what he wants is merit-based aid, but what it seems he NEEDS is need-based aid.

Need based at Oberlin works something like this: Odds are, your family can't afford to pay out of pocket for the entirety of Oberlin, so we figure out what you CAN pay, and make up the difference, mostly in grant (free money!) but with a limited amount of loans (average $5,000 or less per year to pay back) or work-study (money for working that can go directly towards your college costs).

Basically, Oberlin wants to make sure that any student admitted can afford to come here. Period.

Merit Aid is in addition to need-based aid. In the College of Arts & Sciences, it's based on your academic record. In the Conservatory, it's based on your musical talent. Since we have Division III athletics, Finn isn't going to be getting a football scholarship to come here--he'd need to get his Spanish grades up to get an academic scholarship in the College or impress the Conservatory by hitting that high B. If he wanted to play football, he certainly still could--but he'd be doing it for the love of the sport, not because he had to in order to afford to attend.

I think your mother is brilliant.

I love Oberlin and I love Glee. I'm moving to LA in a few months, and I agree that this would be an AWESOME idea.

Sad to say, though, that even if the storyline did happen, there's almost 0% chance that they'd actually shoot it in Oberlin. The Tufts Beelzebubs, one of the nation's best collegiate a capella groups based at Tufts University in MA, provided backup vocals for the Dalton Academy Warblers, but as far as I know, they received no credit for it (outside of Darren Criss' twitter) and the Warblers shown on TV are most definitely not 'Bubs.

BUT!
Both Lima and Westerville (where Dalton is "located") are 2 to 2 1/2 hours southwest of Oberlin, so as an idea it would make a fair amount of sense.

It'd be difficult to build an Oberlin-esque set, though. Much simpler to pack up the whole show and move, don't you think . . . ?

More about my work at the museum.