Note: Written in the dead heat of finals.

At this point in the year, emotions run high. Sleep debt accumulates, steaming coffee-mugs become ubiquitous. Meals are a lost luxury. The glassy-eyed "morning look" persists into the afternoon. Naps become as necessary-yet-decadent as ice cream. But smiles are wider sometimes. And hugs last longer.

If you've heard the song "We Will All Go Together When We Go," by Tom Lehrer, it encapsulates the joyful fatalism of finals. Alicia really excellently describes the paradoxical indulgences and pain of the last week. For freshmen, like Karl, the time may be relatively carefree, but for upperclassmen, there are only late-night burritos, sleeping in the library, and dishevelment until it's time to go home.

And, as academics become more and more overwhelming, performances start accumulating. Part of the blame falls on ExCos, as illustrated (literally) by Ma'ayan. 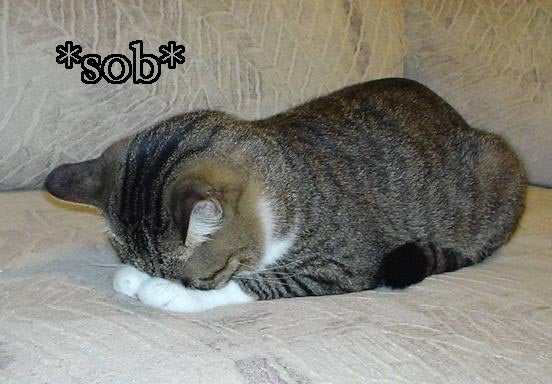 Finals-cat cries for you, Oberlin.

Like real classes, ExCos require some form of final, either a paper, a presentation, or a performance. At this point in the semester, assigning another paper to overworked students would be like feeding a thirsty man a pile of pretzels. It may not kill 'em, but it certainly won't help.

So, here begins the story of two ExCo finals:

For continuing swing, we had to choreograph a three-minute dance to a song of our choice. We had free range of styles. While Sam and John were rather loose in their phrasing, there was an implicit touch of "be impressive." To get an idea of expectations, check out this incredibly sick video of last year's swing finals, performed to 'Swing Set' by Jurassic Five. My response to watching this was to say, very softly to my computer, "GUH."

That said, choreography is not my favorite thing to do. The only swing classes I didn't totally adore were choreography-based. To memorize a routine takes me so many repetitions. And for solos... that's cool. I'm fully prepared to do the same gestures until enough new neural pathways form. I'll make mantras and mnemonics. I'll say my moves with music; I'll count out each phrase. That's expected. That's cool.

But forcing someone else to suffer the slings and angst of my kinesthetically-challenged brain?... That's cruel.

Fortunately, my partner, Ike, felt the same way about choreography.

Ike is a classy guy. He moves with an incredibly elegance and agility. I don't know his dance background, but Ike obviously... has one. He can spin and curl with so much grace; while he's a very clear lead, he still stays relaxed. And he loves dancing to newer music.

We decided on a piece pretty quickly – Supermassive Black Hole by Muse – and blocked out the beginning and the end. In the middle, we set up what style of swing we were doing for each section. Which, I guess, *is* choreography, but with less of the scheduled moves and more of overall feel. It was a lot of fun to practice – dancing to Muse is perfect. Our feet fell into the right patterns. Ike had a lot of awesome ideas, from merengue dips to new spins, which we worked out.

And then, the final.

My swing class gathered in Hales, the idyllic high school-esque gymnasium, a la Carrie, Buffy, The Faculty, Across the Universe, or Grease. There were a few visitors: close friends and some of the swing dance junkies. John, in an act of unspeakable cruelty and/or foresight brought a videocamera to tape our dances.

Despite my all-encompassing, nausea-inducing fear of performing, I felt okay. To me, it felt more like a classy version of show and tell. We all wanted to impress each other, but in different way.

And it went well. I probably did a million little things wrong, but there were no disasters. Then, Ike and I watched the rest.

There were two interesting trends:

When I first saw swing, it always seemed (and was explained as) a very gendered dance. Out of context, the language sounded grossly sexist. Women must follow men. They must listen very carefully for the male directives or they are poor dancers. Women shouldn't do anything their lead does not explicitly tell them to do. Men must be clear leaders. If they do not tell a follow exactly what to do, she will be confused and disgruntled. 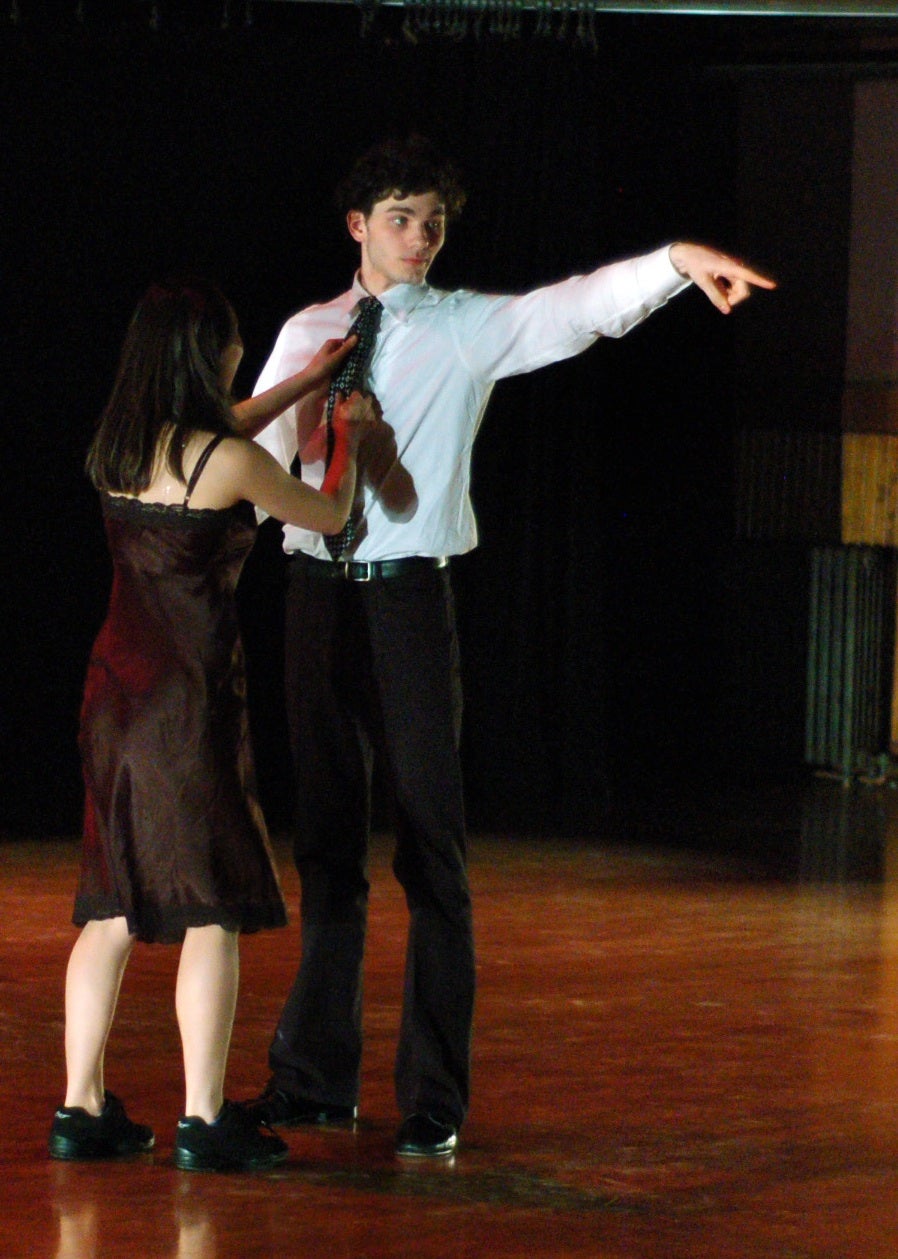 Jeremiah and Haley, leading their Performance Swing class at Fall Forward. Now, back to your feminist-friendly post. Credit: Ma'ayan "My Personal Hero" Plaut.

Of course, most swing dancers aren't quite that... ridiculous. A lot of the language they use tends more towards idea of connection, information-sharing, and communication. Dance as a conversation, as a more equal exchange.

I see leading a dance rather like telling a story to an engaged audience. An engaged audience guides the emphasis, the length of the riffs, the relative obscenity of the jokes. The content of the story won't change as much, but the flow and pacing will sharply alter depending on the responsiveness of the crowd. Without playing to the crowd, the story is flat. But without the crowd giving feedback, the story also falls flat.

Roles are not ironclad affixed to gender, but it still is a bit different to see a woman leading a man.

This being Oberlin, most couples threw a role-switch into their dances.

Our teachers helped us with this. On the day that we did aerials, Sam led all of them, and John followed. Sam is built like a pin-up model, but she's taller than me and considerably stronger. John is my height and very slender. While he can certainly throw her, it just looks better when she throws him.

Which leads us to the other trend:

It's scary to think of how far the class has come in 14 weeks. At the beginning, a lot of us (myself very much included) weren't really great with a lindy swing-out, a basic move. Now, a semester later, everyone was flying through the basics, building complex combinations. It's not easy to teach dance, especially not a dance based on feel, musicality and partnership, but John and Sam (and Cree in the beginning of the semester before the opera ate all her free time) did a fantastic job. As the weeks went on, they specialized lessons more and more, to work us through trouble spots. They saw what exercise worked, they saw what didn't. John went over swing history, added in on-the ground things he'd seen in his various swing adventures... 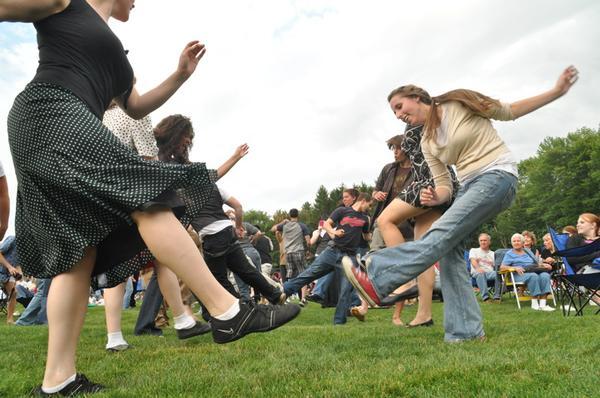 Like this lindy line at a Big Bad Voodoo Daddy concert over the summer. Witness Brandi joyously stomping the air.

In class, John and Sam taught only three aerials, to give us a feel of how to do the moves... without giving us the opportunity to hurt each other. But to make their finals more badassed, about half the groups learned more aerials. It was pretty crazy to watch. Some integrated easily into the dance, others were just big and showy. Andrew flung Sophia around with incredible ease; Charlie tossed Anna across his back.

Besides aerials, most of the dancers were just... good. One couple changed styles about 12 times, from '20s Charleston to Lindy, East Coast and Balboa. They threw in jazz breaks. There were a lot of body-related jokes; Jo-han even did magic tricks.

I think it says a lot that two groups chose to perform to "Friend Like Me," from Aladdin. The best synced was Athreya and Audrey to the "Spiderman Theme," by Michael Buble, complete with comic-book-style action poses. Some couples dressed sharply, others just picked a color to match. 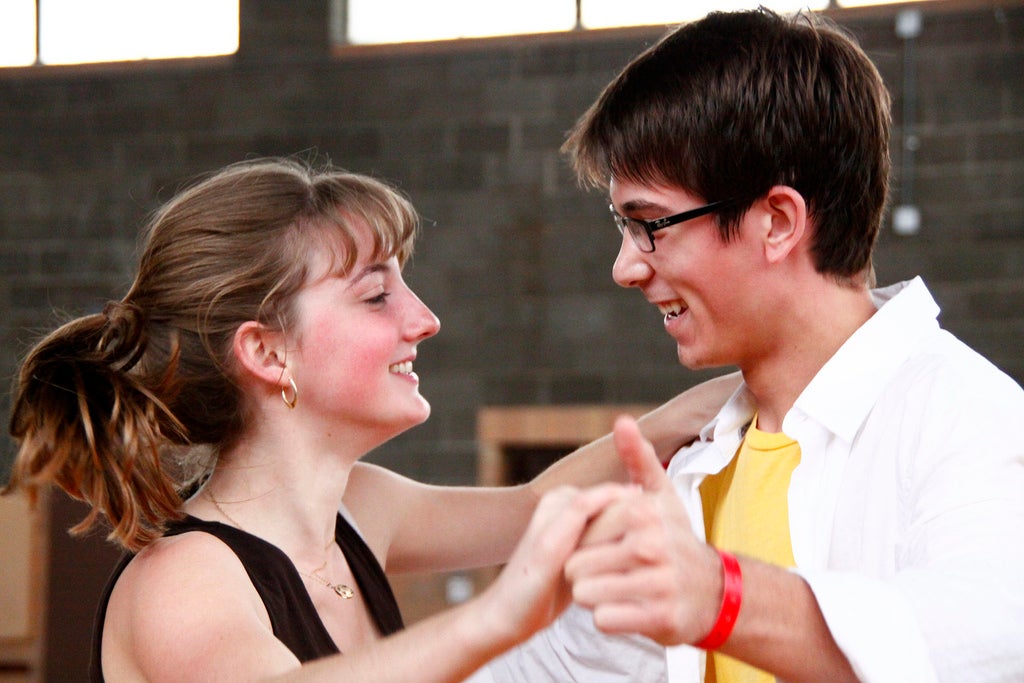 After all the student couples finished, we bullied John and Sam into dancing for us. The previous week, they performed in Fall Forward, one of the big dance shows. Fall Forward collects the best of all dance forms at Oberlin: from hip-hop to modern; with partnerships between didgeridoo players and contact improvisers; TIMARA music with experimental movement. There was a contortionist who performed an incredibly fluid solo, a bellydance ensemble, and a colorful, silly, and joyful student-choreographed piece. The most memorable piece was an intense, genuinely disturbing modern piece, bringing up issues of dehumanization and non-consensual actions. After which... was a swing piece. At the time, I (and a large portion of the audience) were still emotionally torn from the previous piece, and the swing number didn't hit the right chord.

You know when you drink juice after brushing your teeth, and it just tastes wrong (even though you really like OJ)? Just like that. 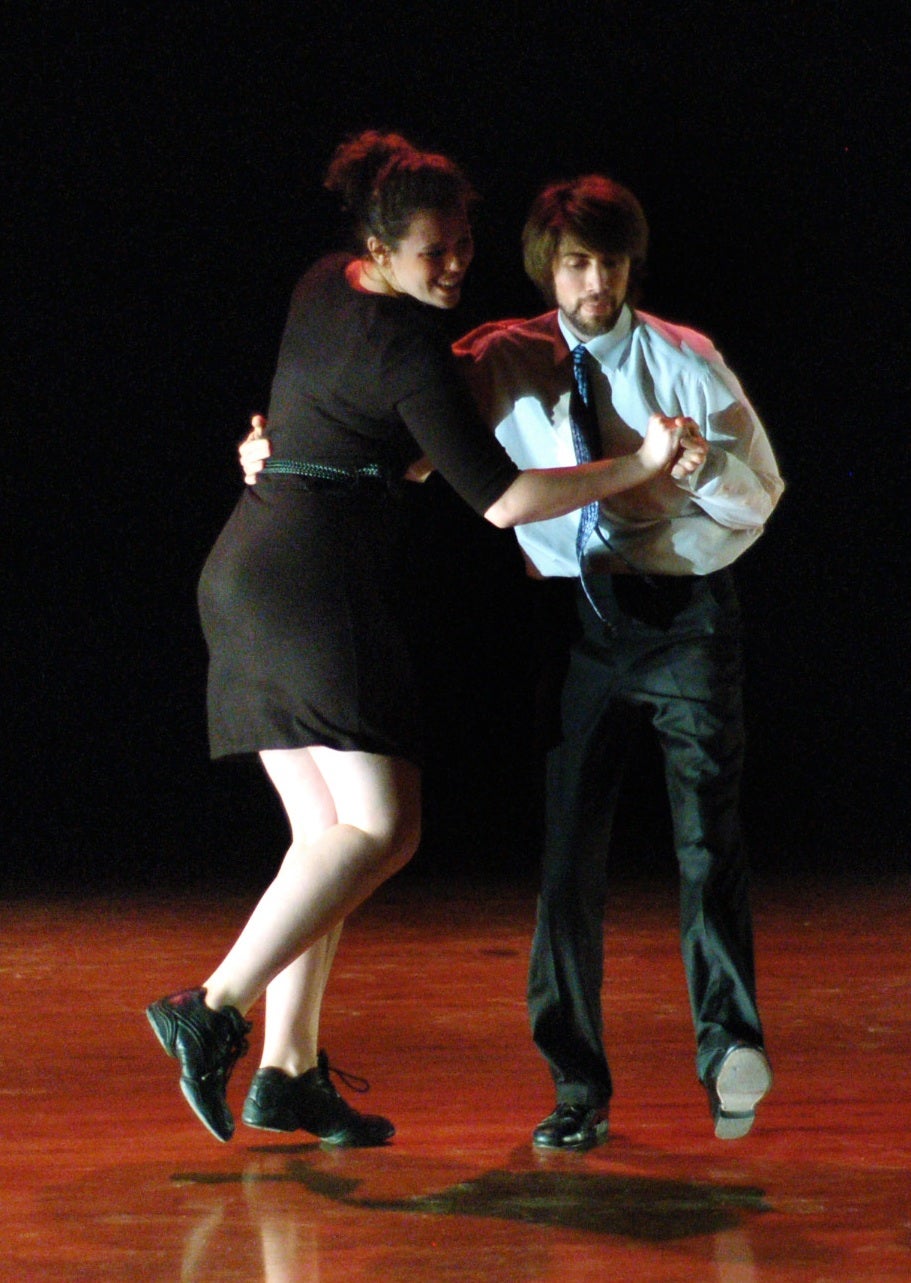 But being able to see it a second time, without the overwhelming images of woe, was awesome. It was a charming, tight, '40s-style piece to "Putting on the Ritz." There were a lot of the cute cues timed with the music, and a lot of good moments. All of the things you're supposed to see in choreography, they nailed. They looked fluid and connected even when they weren't dancing together: the piece seemed natural, though Sam and John both have a really different style.

After they finished, we applauded the professors for a semester well done (all Oberlin classes finish with a final clap for the professor). Then John put on music, Sam fixed the stereos, and we all started to dance.

MAN. I need to take the Swing ExCo!

This sounds so fun!

@Helena
I'll hopefully be taking beginning next semester to learn how to lead... See you there? :)

@ Kate
Yes! TIMARA is experimental music. It's amazing and often... um... hard to understand. The last pairings of theater and dance with TIMARA have been really successful.