I mentioned in an earlier blog post how I am the chair of Oberlin's Filipino American Student Association, or FASA for short, and how spreading Filipino culture has become more important to me over time.

FASA has flown under the radar for some time now, mostly due to the fact that our organization consists of about 10 members. When I reserve a room in Wilder for FASA meetings, the person at the desk is generally very unaware that Oberlin has a Filipino American Student Association. I can chalk this up to either ignorance or FASA's lack of publicity, but I would rather not. In honor of Filipino American Heritage Month (October), FASA held a banquet on the 17th that brought in about 60 sleepy eyed Obies for a Sunday bruncheon filled with lots of yummy comestibles.

From my analysis, this lack of foodie fame isn't a result of some unappealing flavor spectrum. I'm confident in saying that everyone at the banquet had a great time and much of this was a result of the food. Need more convincing? Let me tickle your taste buds with some of the items on our menu:

Lumpia Shanghai - Lumpia is the Tagalog term for egg roll or spring roll. Lumpia Shanghai refers to a fried egg roll filled with ground pork or beef, onions, carrots, and spices. It is generally dipped in a sweet, tangy sauce, but tastes just as good alone. It's crunchy, it's easy to eat, and it's fried! What more could anyone want? Fresh Lumpia - Lumpia Shanghai's healthier cousin. The contents of fresh lumpia vary slightly from lumpia Shanghai, with a larger emphasis on veggies like lettuce, carrots, and potatoes, and are generally much bigger in size. The ingredients are then wrapped in a thin crepe made of eggs and is not fried like lumpia Shanghai. Fresh lumpia is usually dipped in a garlic and peanut gravy for flavor.

Pancit Bihon - Pancit refers to one of several Filipino noodle dishes. Pancit bihon consists of thin rice noodles mixed with various vegetables, meat, lemon, soy sauce, and other garnishes. Tangy and filling, it is a staple at any Filipino meal. 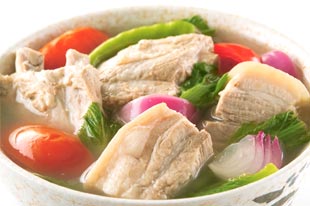 Beef Sinigang - Sinigang is a sour soup made a choice of meat, spinach, tomatoes, onions, pepper, and other vegetables. The sourness of the broth comes from tamarinds, a fruit found in the Philippines and other parts of south Asia. Sinigang is one of my favorite foods ever. It does the heart and soul good and reminds me of rainy autumn days at home. Ack! Too much nostalgia! 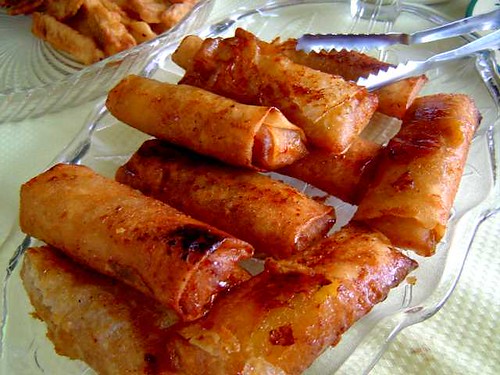 Turon - Can be thought of as a dessert lumpia. Turon is a fried roll filled with brown sugar, plantains, and jackfruit, another tropical fruit found in the Philippines. Generally very sweet, crunchy, and sticky, but who doesn't like licking off their fingers after eating something sweet?

Chicken Adobo - The quintessential Filipino meal. All things Filipino begin and end with chicken adobo. It's a rather simple dish of chicken in a savory sauce made of soy sauce, vinegar, lemon, pepper, and bay leaves. Best eaten with rice so it soaks up all the saucy goodness. If your Filipino neighbor or friend or relative were to ever make you a dish to introduce you to Filipino food, it's chicken adobo.

Sorry if I made you really hungry, but imagine my tummy after writing all of this!

The food was catered by Nipa Hut, a small Filipino grocery store/restaurant located on the west side of Cleveland. They're open Monday through Saturday and have a wide variety of Filipino foods, drinks, and snacks that bring back so many childhood memories. To Merci and Ignacio: If you ever randomly happen to stumble upon this blog, thanks for all the help and for all the scrumptious food!

I put my poster-making skills to use once more and printed posters for the banquet. For context, the bus-like vehicle is actually a jeepney, which is the most popular means of public transportation in the Philippines. They were originally made from US Military Jeeps and are often garish and bold in design and color. Behold! 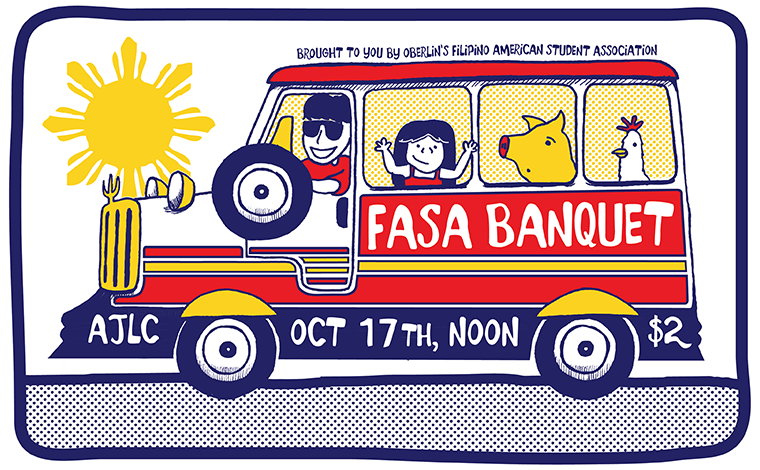 Open larger version of this image in a new window.

Jhanus (super awesome FASA first-year) wrote the cute descriptions of all the food at the banquet and also made that creepy Karl-o-meter deliciousness rating at the bottom of them. Rather than explaining what I mean by that, I'll just let you look at it: 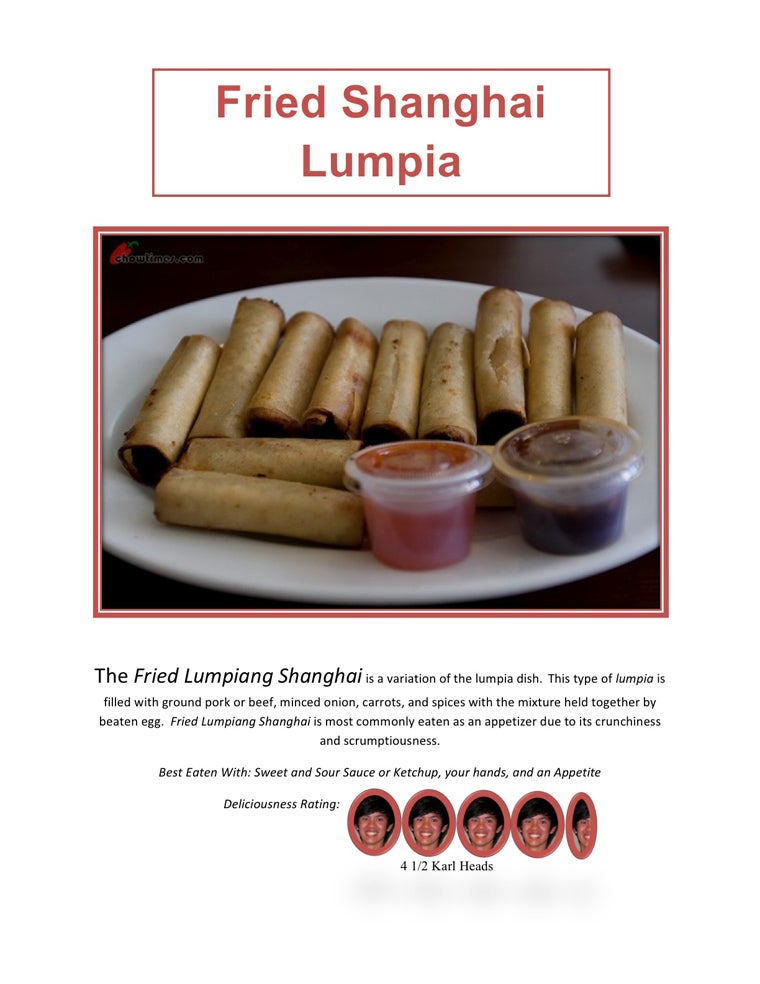 [Image transcription] The Fried Lumpiang Shanghai is a variation of the lumpia dish. This type of lumpia is filled with ground pork or beef, minced onion, carrots, and spices with the mixture held together by beaten egg. Fried Lumpiang Shanghai is most commonly eaten as an appetizer due to its crunchiness and scrumptiousness, Best eaten with: sweet and sour sauce or ketchup, your hands, and an appetite. Deliciousness rating: four and a half Karl Heads. (Karl's head is shown 4.5 times.) [end of transcription]

I don't want to get ahead of myself now, but I figure that this bit of information is relevant to this blog post: I might be going to the Philippines for this Winter Term! It would be my very first time visiting the motherland and I'm both very excited and very nervous. I'll talk more about this when I have a better idea on its likelihood and on what I want to do there. Filipino food is the strongest connection I hold to my heritage, which is not necessarily a bad thing, but is something I need to change. I want to learn more about where my family came from and about the Philippines in general, and this proposed Winter Term would be a fantastic opportunity to do so. Wish me luck!

Karl, I am kicking myself for missing this lunch. Kicking myself. I love lumpia. And I want to stuff my face with everything in this post.

I CAN'T BELIEVE I MISSED IT.

(Anyways, one of my alumni friends posted a recipe for chicken adobe about a month ago on Tumblr and I am saving it for a rainy day. A very soon rainy day.)

Hey Karl, and the other members of FASA!

Thanks for keeping the tradition alive! I remember when we started FASA, and how it was constantly a struggle to get members, mostly because there aren't that many Filipino and Fil-Am students at Oberlin. I applaud your efforts and encourage you to actively recruit and encourage the admissions office to recruit more Filipino and Fil-Am students, so we can continue to have representation on campus, and build a thriving community!

P.S. Since you have so many Pinoys and Pinays on campus, you should think about resurrecting the FASA Symposium. We only were able to do it once, and back then we had maybe 6 active members, maybe!!! It is a great way to promote visibility and the history and culture of our people here in the U.S., in the Philippines, and abroad, in the rest of the Diaspora.

Hi Karl! Aishe sent us FASA alums a link to your post, and thanks for this, it was brilliant. I remember joining FASA as an international student; there were 5 of us. 10 is absolutely mind-boggling. I'm glad to hear the Filipino community is growing in Oberlin!

Oh man, look how us Filipinos show our love. There may not have been very many of us, but we sure are proud. Karl, I'm really excited to hear that you could be going to the Philippines for the first time this WT, though I had been before, I used two of my WTs in the Philippines and I hope you have as much fun connecting as I did.

And PS. I want one of those posters if there any extras!

I want a Karl-o-meter for every aspect of my life.

Wow! The Filipino foods in this website look so soooo delicious! I love Filipino food and I really enjoyed reading this post! It's great. Thanks for sharing.