I was in Arizona when I received an e-mail saying I'd been nominated for Editor in Chief of the Oberlin Review, and it sent me into a spiral of questions. Yes, it had been a dream of mine since arriving at Oberlin, but was it still what I wanted? Had my semester on the border made me value activism over journalism? Could I be both Ed in Chief and the head of the Nicaragua Sister Partnership? (Answer: no, not if I want to sleep and eat senior year.) After a couple days of agonizing, pro/con lists and all, I wrote back declining the nomination, determined to focus my time and passion on the Nicaragua project. Part of the decision also came from the realization that I love writing much more than editing, and would rather have the time to put together an investigative news piece or a hard-hitting column than get bogged down with the often tedious details the Eds in Chief have to handle, such as broken computers, budget cuts, and arranging meeting after meeting after meeting. Not that the job isn't extremely rewarding! It's just not for me. The people eventually tapped to be our fearless leaders for the fall are just right for the job.

Yet the Review, god bless them, wouldn't let me sneak away entirely. After much wheedling over e-mail and phone, they somehow convinced me to come back as News Editor, a position I've proudly held in the past. I suppose I caved after remembering all the fun I've had in that messy basement office--making up punny headlines at 2 a.m., having random parties or dress-up nights, bonding with some of the sweetest and most hilarious people at Oberlin... 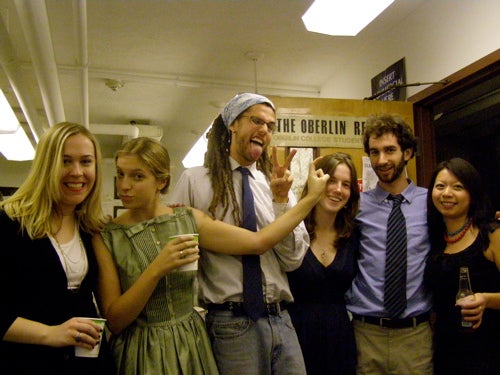 The Review has been good to me over the years, hiring little freshman me and always encouraging me to apply for whatever position opened up. I got to start my own column, Earth to Oberlin, on environmental issues on campus. I've had the honor of interviewing luminaries from presidential candidate Bob Barr to author Michael Pollan to both Ben and Jerry of Ben and Jerry's.

I will also admit the money factor. Editors do get paid. My Nicaragua position, through OSCA, does not pay. I just get four co-op hours of credit a week, though I'll be doing much more than four hours of work.

In the end, I think I'll have the best of both worlds next year: activism and journalism, merriment and responsibility. Will I be stressed and busy? Probably. Will I have an incredible time? Definitely.

Glad you're interested! If you want to write, just e-mail me (alice.ollstein@gmail.com) when you're at Oberlin and we'll invite you to the writer's meetings. If you want to be a copy editor and make some money, e-mail our new managing editor, Chris Gollmar (christopher.gollmar@oberlin.edu). My suggestion...do both!

Can first-years be staff writers? Do they get payed?

Anyone can write for the Review no matter how fresh you are, but writers do not get P-A-I-D (sorry, the copy editor in me sometimes shows its teeth). Writers can get either one or two academic credits, depending on how much they write. If money is what you want (and I don't blame you!) you can apply for any open position. Contact me or Chris (see previous comment for his e-mail) in the Fall.
Thanks for your interest!