Yo. Wuddup. I'm Karl Orozco. Come on and check out my crib.

Okay, let's back up. I have a confession to make: I love Cribs. You know... that television show on the wonderful network famous for other classy shows like Jersey Shore and Real World known as MTV. What does MTV stand for? Gee, I don't know.

But that's beside the point. I repeat: I love Cribs. So c'mon in. Let's take a look around Barrows Hall, shall we? 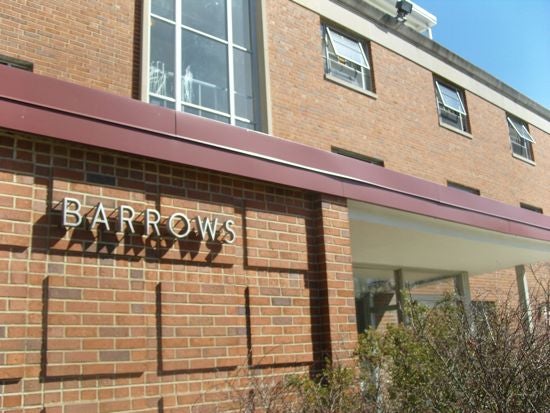 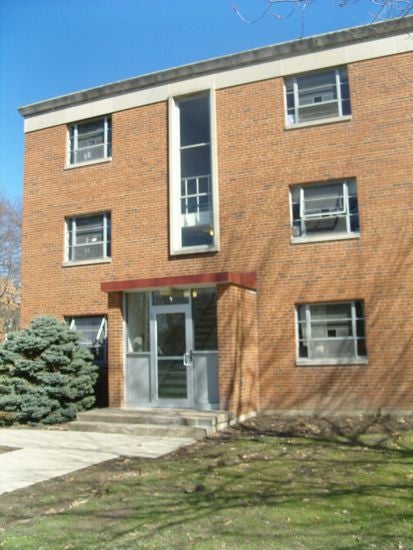 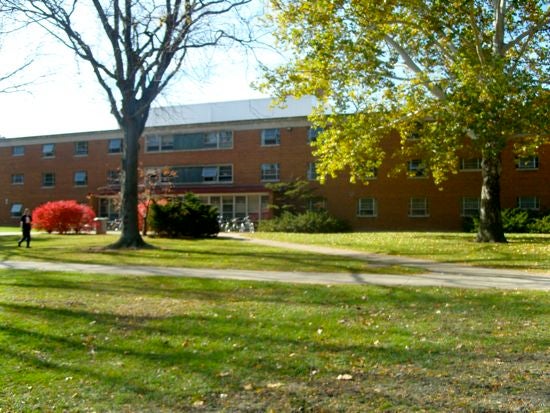 This is Barrows, one of two first-year dorms (the other being Dascomb Hall). Situated along Woodland Ave. and right in the heart of North Campus, Barrows is also one of seven dorms surrounding the beautiful North Quad. On nice days, it's a common sight to see a few frisbees flying around or the Barrows soccer team being cool. It's approximately 10 seconds away from the hulking Science Center that frames North Quad and a couple minutes away from Stevenson Dining Hall, the largest cafeteria on campus. In addition, it's also equally close to Wilder Hall (Oberlin's Student Union) and Philips Gymnasium.

Here's the main lounge. Lots of chairs, a couple sofas, a vending machine, a piano, and a 30-ish inch television. Nothing too fancy, but where Barrows is different is the fact that everyone living here is a first-year like myself. It makes making friends a lot easier (at least in the beginning of the year) and we've grown a really nice community that I don't think I could have gotten at a non first-year dorm. 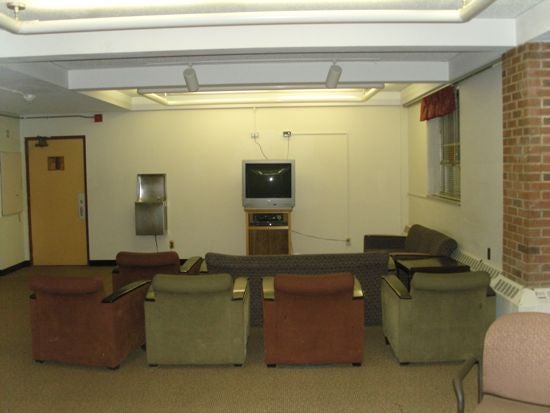 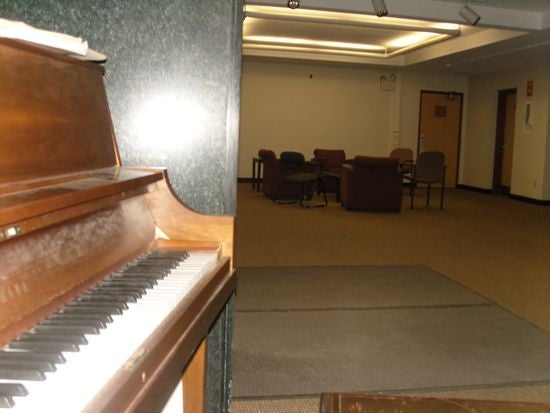 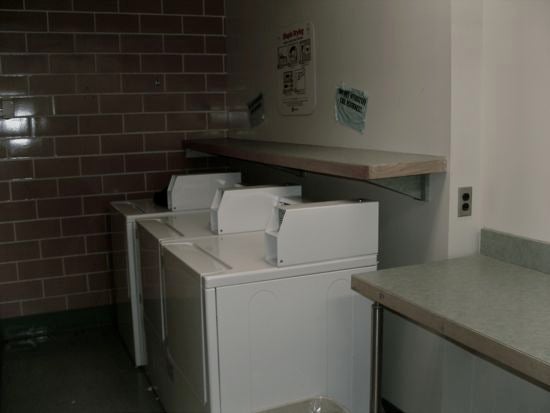 This is the third floor lounge. Complete with a refrigerator full of old Science Cart meals and a pitcher of filter water that I take water from all the time. I still don't know whose it is. By nighttime, the lounge is almost always filled with Barrows residents studying, or "studying."

Onto one of the third floor bathrooms. What's so special about this bathroom? For one, we've got a 30-person Jacuzzi! (That was a lie.) Many dorms on campus are gender-neutral, meaning that anyone can use this bathroom regardless of gender. For example, while the lovely Julie is brushing her teeth, I could be in the shower, whistling and scrubbing my naked self. 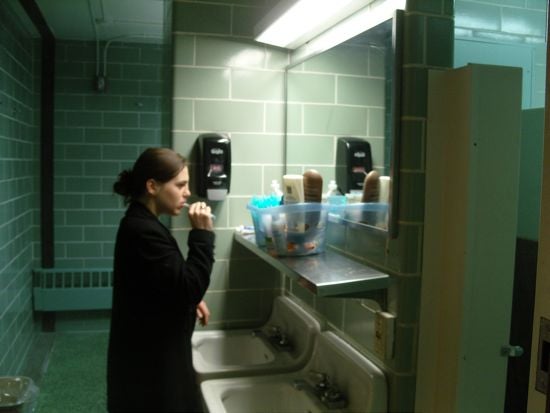 And by the way, I have the best RA, Susanne. She's loveable and makes the best door decorations for our hall! Take note of the before-and-after versions of 80s actors and actresses. My door is adorned with two Matthew Brodericks. Sadly, I have the older, less funky-fresh version while my roommate Mustafa has the younger, hipper Matthew. But have no fear! My new door decoration is an army of purple clams... running... WITH LASERS!!!!!!!!1!!!! 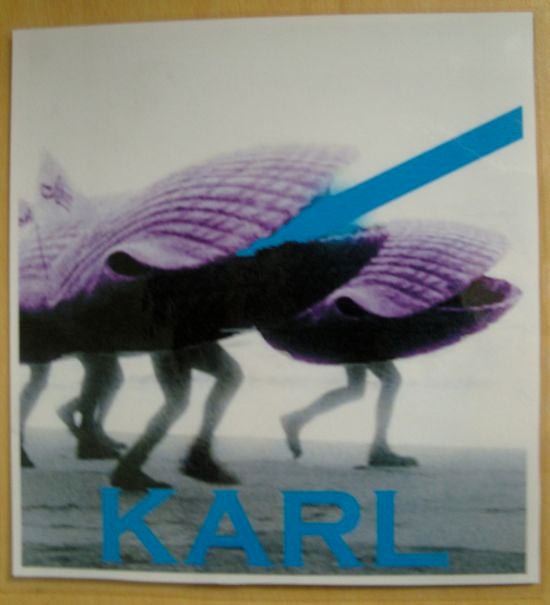 And now, the moment you've all been waiting for: Karl's room. What kind of magic and mystery is housed in Room 315? Let's find out. 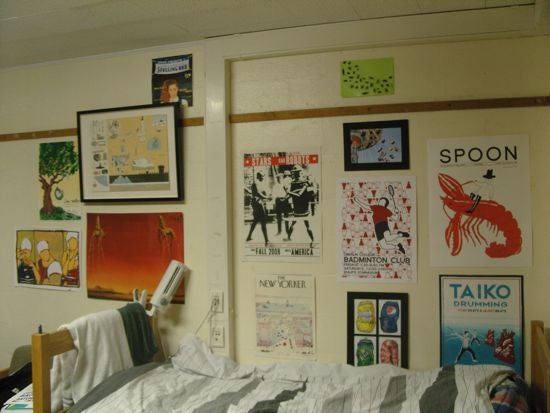 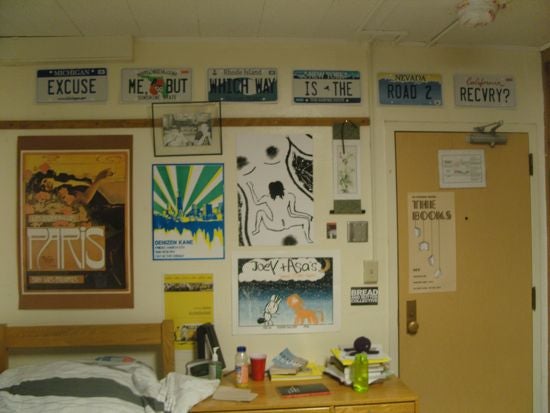 So what makes my room "me"? Well, I have lots of posters on my walls. Lots. So much that I have asked my aforementioned roommate Mustafa if I can use his wall space. It's always such a dilemma when I bring back a new poster and frantically re-arrange the existing posters to make room for more. As you might tell, a lot of these are ones that I've silkscreened in the past. The rest are random posters I've collected while at Oberlin or elsewhere.

Hmm... what else, what else... My room has a window! That's pretty cool, I guess. The floor has cigarette burns from whoever lived here last! That's... cool too, I guess...

Let's just skip to the best part of Cribs: my bed. What kind of cliché jokes am I gonna make about all the action this mattress gets? Well, none. I mean, it's just a bed. Twin XL, two pillows, slightly raised by the bed risers (taken from The Free Store!), but a bed nonetheless. However, I will say that I've got a really comfy foam pad on my bed, which probably explains the inordinate amount of girls that sit on my bed for a couple seconds but end up staying the night in my bed. *misogynistic high fives all around*

Finally, the last part of every Cribs episode: MY RIDE. Awwwwww yeah. Ch-ch-ch-ch-check it out! That's right. It's a broken, rusted, JCPenney, Kelly Green cruiser bicycle. But that's not all! It doesn't shift gears, and it has busted front and back brakes! Jealous much? I think so. 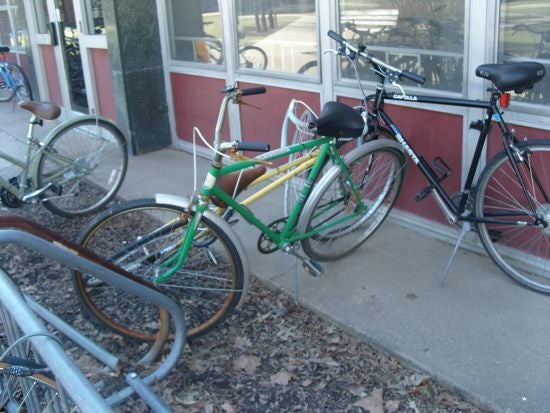 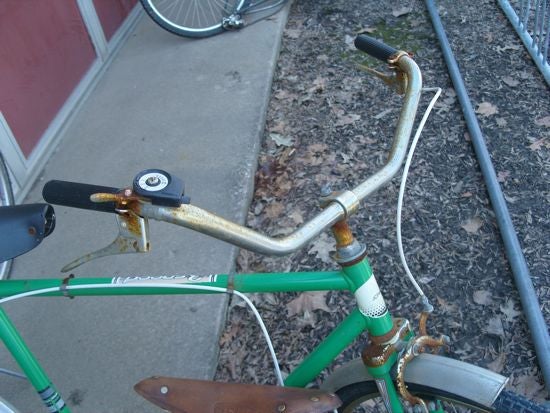 Okay, well that was a downer. Also, that's the end of my crib. Now the whole world can stalk me. Hurrah!

I think this one was my favorite post ever. Makes me anxious to come home sweet home and hug all of you. Also, did Mustafa know you were taking that picture? I'm dubious.
Also I come home to hear my parents talk about how talented my friend Karl is. Sheesh.

(I wonder if you get notifications of responses...)

Questions about Barrows:
1. Are all beds unbunked?
2. How is the air conditioning? I'm wondering whether I should bring a fan.

Gian - We bloggers get emails every time someone comments on our posts, but I'm gonna answer this too so you have an answer quickly! (Hi Karl, you're getting this answer via email, too :P)

- Beds come unbunked. If you're interested in bunking them, ask your RA for pegs to connect the beds together.

- There is no air conditioning in Barrows, and a fan would make your life just breezy (and it's pretty necessary for the first few and the last few weeks of the year).

Got it. Thank you!

Is all of the furniture movable? And about how high are the beds off the ground in their un-raised state?

-Silvia
All the furniture is movable. As for the beds, they're about 1-2 feet off the ground normally, but that can be adjusted if you need more space underneath.