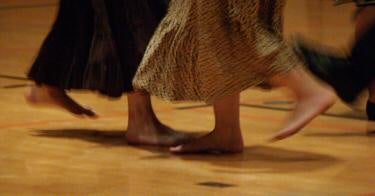 Well, depending on who you ask, it's a line, social, square dance, or barn dance, built out of English folk dance traditions. A caller reads out instructions for the dance, walks everyone through it once, and calls out moves throughout the dance. Everyone partners up, but also dances with every other couple on the line. I think it's all a metaphor for infidelity within small towns: you'll stay with your partner, but you'd really like to take on your neighbor. 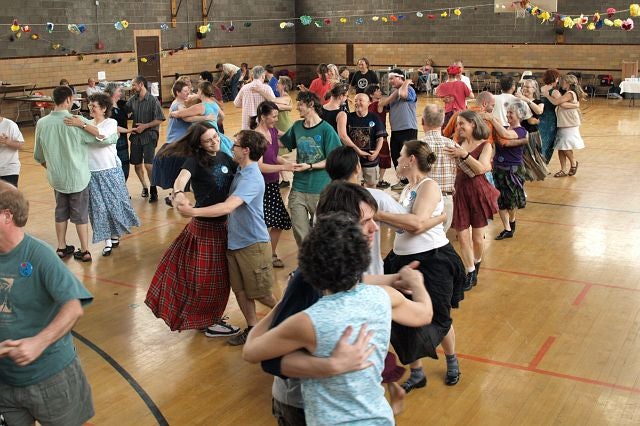 The contra theme was "Formal," so I wore my little black dress and went out to dance with fine-frocked ladies and buttoned-up gents. I've been getting into leading, as well as following, which is helping me with my overall frame. The contra scene here is very cool with non-standard gender pairings: women leading women, men as follows... it's all good. It also leads to better dancing all around, when you understand why your partner makes the movements that he/she does. 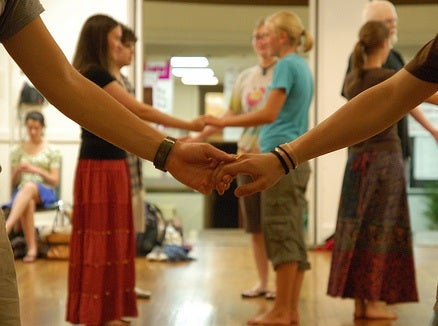 It's a very easy dance to learn. The essential move is the "swing," where each partner faces the other, rests their arms on the other's back and spins around. It's awkward for the first few times -- you feel as if you're skipping while attached to another person -- but with practice, it comes easily enough. The other moves are deliciously simple: the allemande, the do-si-do, circles, stars... all of which the caller's say in time with the music, so the entire room of dancers moves in unison with their separate partners.

And of course, there's live music. The contra band has a rebellious streak, changing its name for each gig. Tonight, they were "Stretchy Rhino." Or "Chewy Rhino." Or "Tasty Rhino." Besides a fiddler, there's sometimes dulcimer, banjo and percussion. 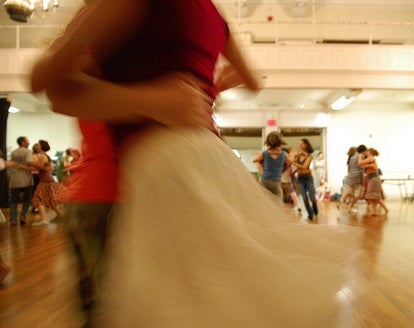 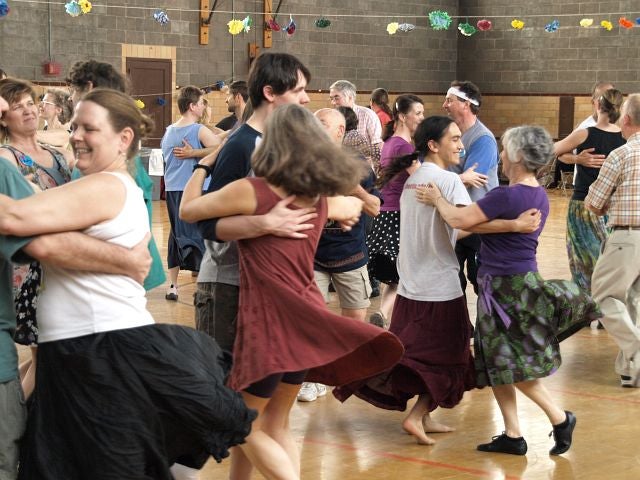 It's also a great way to make friends. Rather than club dancing, contra has space to speak with your partner, rather than just whirling around. I've gotten to meet some amazing people: not only other Obies, but folks from around Ohio. As I've been doing it since I was a wee first-year, I've gotten to see people change. One girl who started going when she was 12 has now hit puberty and talks to me about middle school -- another partner has just fathered a child. It's a different slice of life.

One of my favorite partners is Glen, who I've been dancing with for about 3 years. Besides being a supremely kind and generous landlord to college students, Glen works as an electrical engineer. His workdays start at 5:00 AM and end at 6:00 PM. Strangely, he's a relaxed, easy-going guy. Over the summer, we got coffee and chatted about progressive radical baptists, permaculture, music and peace movements. As much as I love college students, it's nice to be able to connect with someone who's in their 50's.

The dances typically end with a waltz, but this one had a special ending show, from the rapper sword Exco, dancing with huge bendable swords in gorgeous patterns! 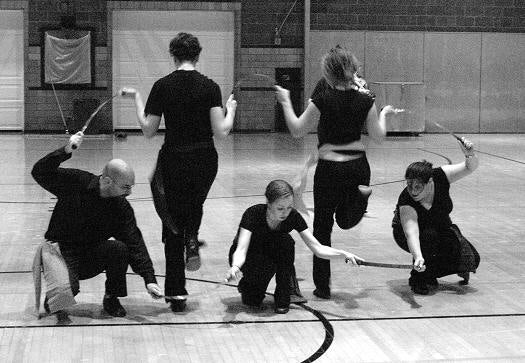 Hey Aries, glad you caught some of the SURF event. I still can't believe how much they raised! Go Obies...

Yeah! Cordelia told me they made 2300, over twice what they did last year.

Hi Aries. I left you a URL pointing to something which I hope will make you smile.

I enjoyed your post and wrote about it at the Country Dance and Song Society blog:
http://blog.cdss.org/2011/01/18/oberlin-dance-blogging/

Thank you for posting about your Contra Club!

I'm entering my senior year of high school (in CA).. and am on an active quest of finding THE smallish, artsy college, with the awesome addition of having a lively contra dance Community! Contra is my life...

How often does the Obie area hold dances?
and Are there any Annual dance Soirees/Camps/Events?

Also, what shenanigans usually happen during a contra club meeting?
knowing you have a club blows me away..

I'm so glad you asked about our Contra club, which is very active and full of wonderful people! I've been involved in Contra at Oberlin pretty much since my freshman year and a more active organizer in recent years. We hold least one monthly dance—some months we also have an additional special dance. Each of these dances features student callers and bands (though occasionally we bring in an outside band for our monthly dance). Every year in the Spring we organize the Dandelion Romp weekend, which features big callers and bands who we bring in. It's a huge, delightful Contra dance weekend that draws lots of people both in and out of town. You can read more about that on my blog post. In addition to the local dances we organize, there's a monthly advanced dance in Cleveland, which the club sometimes drives to. We didn't really do that this year because of a lack of available cars, but we have in previous years. This year the club also subsidized a bunch of folks traveling to the Dance Flurry in Saratoga Springs and the plan is to continue sending people to that weekend and Youth Dance Weekend in the future. Some years we go to the May Apple Stomp, but most years it conflicts with commencement, so we don't.

In short, Oberlin has one of the most active Contra communities of any college I know of and we take it beyond Oberlin as well. In my experience you'll find a couple of Obies at almost any contra dance across the states—though you won't always know who they are unless you wear your Dandelion Romp t-shirt. There are two Obie alumni on the Youth Dance Weekend organizing committee and I'm actually on a trip right now to visit Pinewoods Camp where there are five Oberlin students/alumni on staff.

We only have meetings a few times a semester—and they're generally more organizing- and less shenanigan-oriented (making a Contra evening work requires a little planning!) but we do traditionally have parties after every Contra dance where people hang out and sing and sometimes dance Kerry Sets if there's sufficient space in whatever house is hosting. Lots and lots of fun.

I encourage you to come visit during a contra weekend especially—if you can manage it—the Dandelion Romp weekend. Once it's updated, you'll be able to find the schedule here and information about the Dandelion Romp here. If you have more questions about the contra club, feel free to send me an email (hlapirof@oberlin.edu).