For three weeks of the year, the walls of the Bent corridor (which I totally thought was just a descriptor, not the name of two illustrious alumni, up until last week) are graced with beautiful local artwork from students from the 9th Congressional District. I was ever so lucky to be there photographing it.

I discovered artistic creation late in my school years. I entered the school art show my sophomore year of high school with a sculpture and three photographs; a solarized photo of my brother making a strange face won an honorable mention. It was taken on one of those humongous Sony Mavica cameras in a negative mode, on a 3 1/2" floppy disk. Oh, have things come a long way since then, for both cameras and myself.

And maybe it's the state or maybe it's the times, but art shows have improved as well. This was an invitational art show, with the pieces hailing from all over the 9th Congressional district. The first and second place winners were to have their pieces hung in Ohio congresswoman Marcy Kaptur's office for the year, plus a financial prize was awarded as well.

It was fitting, then, that Congresswoman Marcy Kaptur presented the winners with their financial awards and praise as well as encouraging the students to speak about their pieces. Marcy Kaptur has been advocating in the House for funding for the Arts Commission of Greater Toledo, in hopes of aiding in developing and marketing of local artists.

Now, I don't know about you, but I used to get all stumbly and self-conscious when asked to speak about my own work. It just seems odd to speak about yourself in such a way, especially something as personal as a creative piece, whether it be writing, photography, food, what have you. I like talking about it with other people, essentially a conversation with a creative piece at its core, but speaking to an audience that may or may not understand your work or that isn't interacting with it is completely terrifying.

That said, I'm really happy Congresswoman Kaptur asked the students to talk about their work. One of my favorite pieces, which received second place in the show, was by Oberlin High School student Hannah Jones, a self-portrait painting done with stark 1950s style, with her cat and grandparents gracing the image as well. Hannah will be attending Oberlin in the fall, which means I'll be happily seeing her work at a variety of studio art class shows for the next year.

Two other students were present at the show, including Jacob Forren of Edison High School, whose landscape painting will be hung in the law office of Eastman and Smith for the next year, and Emily Arlington from Firelands High School, who created a graffiti-esque piece based on the quote, "Somewhere there's someone who dreams of your smile."

The crowds that gathered from around the area on this rainy afternoon were treated to a delightful taste of the young talent with mini cheesecakes on top. To all you Oberlinites who missed the delicious reception, the beautiful pieces will be up the corridor until March 23rd. Check them out. 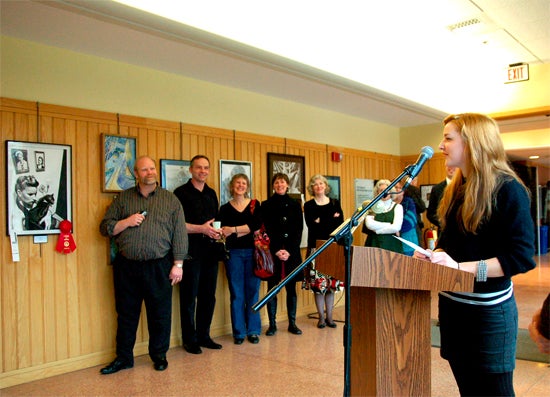 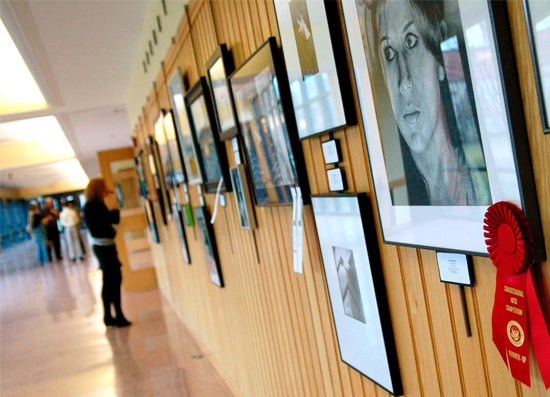 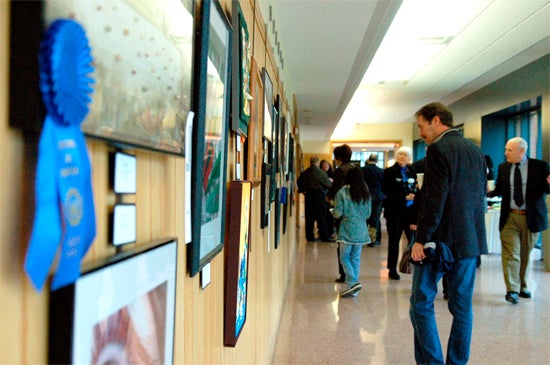 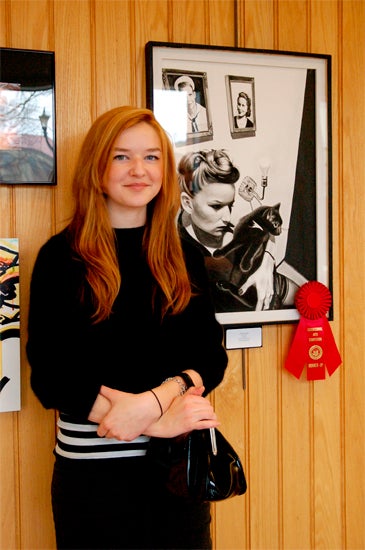