It's spring break. It's two in the morning. At home in Vermont, I am sitting at the kitchen table in the dark, listening to the rain pour down and trying to figure out how much it will cost to fill a kiddie pool with vegan Jell-O.

How did I end up here?

When I applied to be OSCA's Education Coordinator, I was completely prepared for the job: training newbies, liaising with other organizations, and spreading co-operative cheer to prospies. Little did I know that Pyle Inn &mdash OSCA's first co-op &mdash was founded in the spring of 1950, making this our sixtieth anniversary, and an epic celebration was expected. So I metamorphosed into the unofficial All-OSCA Party Planner. While my co-op comrades wash broccoli and clean sinks, I've been having lunch with alumni, listening to samples from every band and DJ on campus, and &mdash of course &mdash writing budget after budget. Let me tell you, my job is tough. 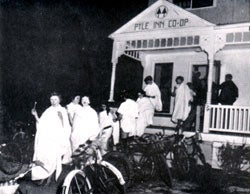 So what's in the works? Over the next few weeks we'll be organizing a presentation by the founders of Pyle Inn, a scavenger hunt, and a day of service with a local food bank. It all culminates with the OSCA Prom: a co-operative send-up of a traditional high school prom, complete with murals painted on recycled cardboard, heads of garlic hanging from the ceiling, and some of the most awesome bands on campus. Finding a date is no problem &mdash most of the co-ops have already asked each other out. Harkness received this charming invitation from Fairchild, our long-time sweetie: 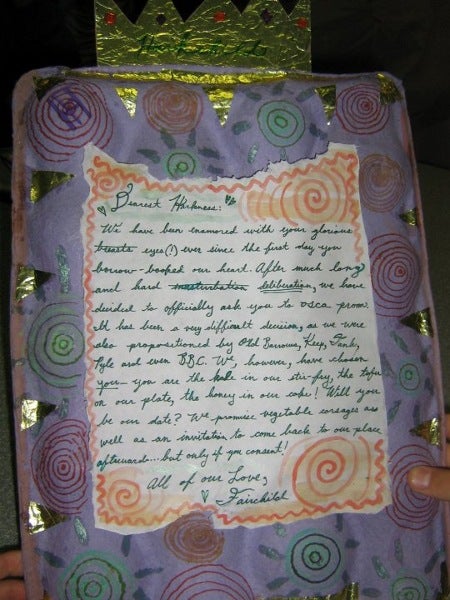 Which brings me to the kiddie pool full of vegan Jell-O. Iris, our Financial Manager and the resident responsible adult, was adamant that any anniversary celebration should include Jell-O wrestling. "It's an old OSCA tradition! Every co-op would make a tub of vegetarian Jell-O and haul it down to Old B. It was so much fun."

Really? Ιt sounded like a health code violation, and oddly frat-tastic. (Oberlin has no fraternities or sororities, and co-ops &mdash which select members by lottery and set them to work in an industrial kitchen &mdash are a poor substitute for Greek life.) And &mdash let the record show &mdash I have zero experience with Jell-O wrestling.

Fortunately, as an archaeology major, I am eminently qualified to reconstruct the past... and I had no qualms about dragging the OSCA librarians and food-buyer into my quest. Research in the OSCA archives yielded authentic photographs of the ritual as practiced in the mid-nineties. E-mails to our food suppliers yielded the necessary ingredients, with some skepticism:

If you go through with this, can I get photos? Cause we are having trouble picturing Oberlin students (who we are sure are folks of the highest intellect and moral fiber) wrestling in jello, vegan or not...

So, for the unbelievers, here's the slimy, scantily-clad reality of OSCA Jell-O wrestling, circa 1997:

If you'll be on campus over the next few weekends, feel free to grab a meal in a co-op and drop in on the celebration! (Don't worry, we won't make you wrestle.)

"Fortunately, as an archaeology major, I am eminently qualified to reconstruct the past."

Great job as Education Coordinator, Eli. I am so excited for all the festivities. Even planning them is fun! I love OSCA!

I'd so much rather go to this prom than my own.

@Aries: The real question is... will my Intro to Archaeology professor give me credit for this? Belated midterm project?

@Nora: It sure helps that I have awesome committee reps :D

@Kate: Be careful what you wish for - you are totally invited to OSCA Prom...

As one of the Jell-O wrestlers in the above photo, I need to issue small correction: that photo is from spring 1993, on the lawn in front of Old Barrows.

I'm horizontal, with black (!) underwear, about to be grabbed at the waist by Brad Masi '93, who currently works at Oberlin.

Thanks for finding this! I'd love to see the original.