I'm here for the whole dang semester, from July until December, studying with the CIEE Liberal Arts in Buenos Aires program. I'm one of about 300 Oberlin students who each year choose to study away for a year or semester. I like Oberlin a whole lot, and am definitely feeling the FOMO as the fall semester starts, but having the opportunity to thoroughly explore a different country has always been a dream of mine, and here I finally am!!

Oberlin has the Office of Study Away for students who are considering spending either a semester or a year at a different school or program. Dean Sayles is head of the study away office and she makes herself available to meet students individually to guide them through the application process. I did not take advantage of this resource (because disorganized, foolish) and instead I chose my program without outside help. I lucked out because I already had a clear idea of what I wanted, and wasn't overwhelmed by choices, but for others, I recommend help from the Office.

So why Argentina? I have been taking Spanish lessons since elementary school, and while I love learning the language, there's a limit to what can be achieved in a classroom (for me at least). Since high school, I knew I wanted to study abroad in a Spanish-speaking country in order to really solidify my language skills. Because I am a Latin American studies major, going to South or Central America rather than Spain was a given. Additionally, I preferred not to go to Europe because I felt I will have fewer chances to travel to non-Western countries, so I was deciding between language-intensive programs in Chile and Argentina. I applied and was accepted to Buenos Aires first, and decided to end the search there. Fast-forward five months and I've already been in 'Tina (as I affectionately call her) for six weeks.

Choosing to study abroad first semester was also strategic. Many of my close friends were also going abroad the same time, I wanted to see my senior buds for their last semester, and I was all set to teach the Advanced Improv Exco in the spring. Also since I was switching hemispheres I would get to experience two springs this school year, and I like that.

To prepare for my semester abroad I had a brutal summer, working two jobs and 60-hour weeks in order to save enough to sustain myself for five months. I did a lot of careful packing (five months = three seasons!). I read some guidebooks and, largely influenced by my winter term experience in El Salvador, I also made a list of guidelines for living in a Spanish speaking country. For example, one rule was to speak as little English as possible in order to respect the culture I was entering and open myself up to making Spanish-speaking friends. Now that I'm here, when I'm feeling lost (which is a lot of the time) I can look back at my list to help guide my experience. Pretty much everything is new and exciting and scary right now, just like my first semester at Oberlin. However, after six weeks I know I made the absolute right decision coming here, and I am so excited to be on this adventure. 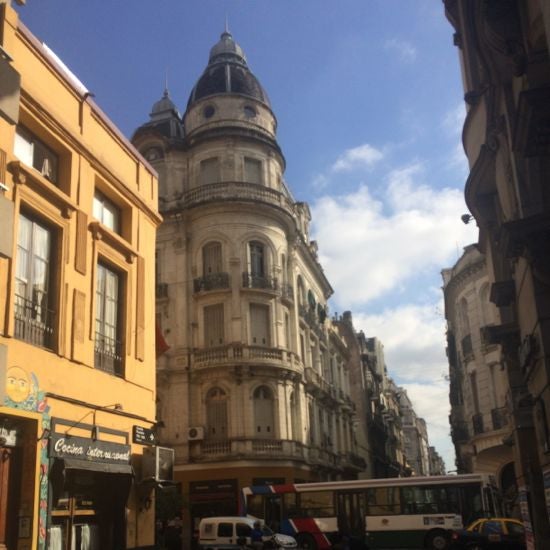 It's a bad idea to whip out your cellphone on the streets, so I don't have a ton of pics, but here's a pretty building!