I've lived in a lot of different places over the last four years. If we're counting anywhere I've lived for at least a month or more, the total count since I graduated high school is...TEN. Talk about a diffused sense of home! So, moving itself is a bit of a hassle - but there's something cool about occupying spaces that have so much history in them, so many Obies who've lived there in the past...this message was left over from a past resident of Baldwin, where I lived my sophomore year: 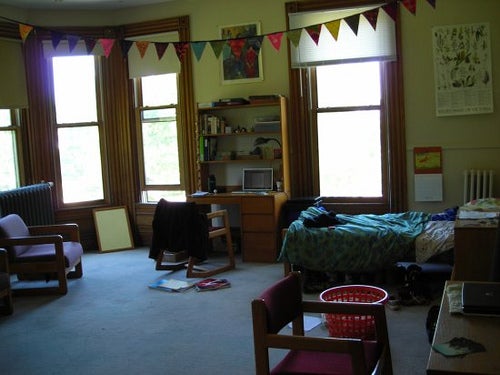 Though not all of those places have been in Oberlin, a good many have, and for what it's worth, here's my review of the different dorms, apartments, and houses I've occupied during the school year. 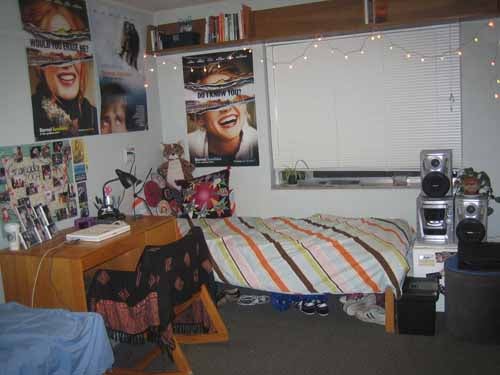 D-comb, as we affectionately referred to it at the time (is that still okay? Anyone, anyone?), is one of two all-first-year dorms on campus. It's not only centrally located (1.5 minutes flat from my bed to King, where pretty much all my humanities classes ever were held), it's also housed in the same building as one of the three (four if you count Decafe?) dining halls on campus. That meant that when I intentionally avoided taking any morning classes my first semester at college, I could roll out of bed at noon, pad downstairs in my PJs and slippers for "lunch" with my friends, and get on with my day from there.

Though most all dorms at Oberlin are entirely co-ed, I lived at the end of an all girls' wing in Dascomb - which caused my hall to be fairly peaceful in comparison with the rest of the dorm. Though I'm all for having quiet spaces, I've always recommended all-first-year dorms highly on my tours, because in them, everybody is in the same boat, hungry for friends. Many of my closest friends today all lived within a twenty-foot radius of each other in Dascomb three years ago. 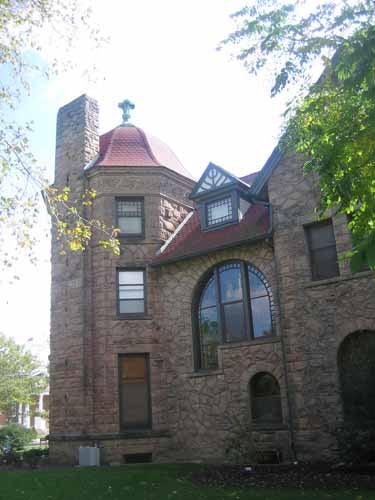 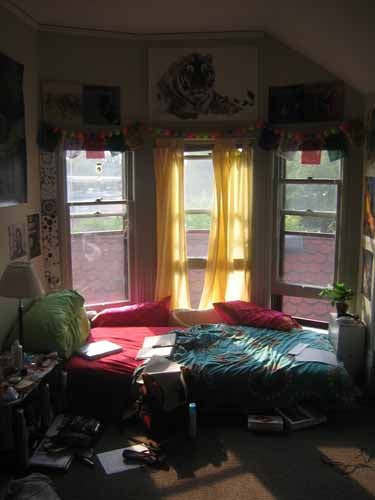 Baldwin is one of Oberlin's program houses - the women's collective (and, unofficially, a safe space for both women and transgendered people). At the end of freshman year, in an effort to decide where to live the following year, Seyeon and I marched all over campus and knocked on doors in every residence hall we could find, asking to see the insides of people's rooms and about how they liked living there. Our four-hour jaunt around campus both made us new friends and also convinced us that Baldwin is, hands down, one of the most beautiful places to live in Oberlin - an old house with huge, interestingly shaped rooms, tons of windows, a tower, and fantastic, homey lounges. Plus, its mission statement of supporting feminist issues and open dialogue appealed to both of us a lot. Our house hosted a performance of the Vagina Monologues that year, as well as many discussions, programming, knitting parties, baking extravaganzas, and so forth. + STUNNING sunsets visible from our window. Good times... 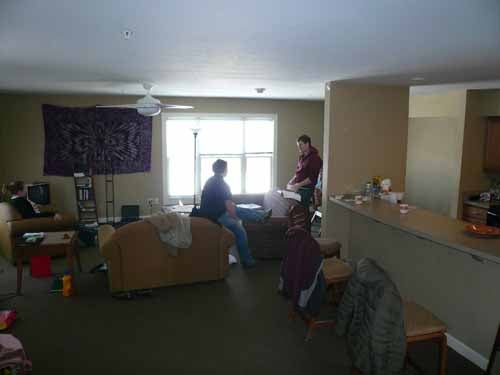 After I came back from my semester abroad in the Netherlands, ResEd threw me into village housing with random people I'd never met before. Village housing becomes an option your junior year - basically, houses and apartments owned by the college but leased out to students. Dorms are fantastic for fostering social community, but it was a relief for me to migrate to a place where I had my own bedroom, as well as a non-communal bathroom and kitchen and all that jazz. The strangers I got thrown in with my junior year turned out to be some of my best friends I've had at Oberlin. I have a lot of great memories staying in to hang out with each other, cook great meals, play Scrabble, watch movies, host pancake brunches on weekend mornings, etc. This goofy shot is of Seyeon and me; I'm clearly really excited about those pancakes. 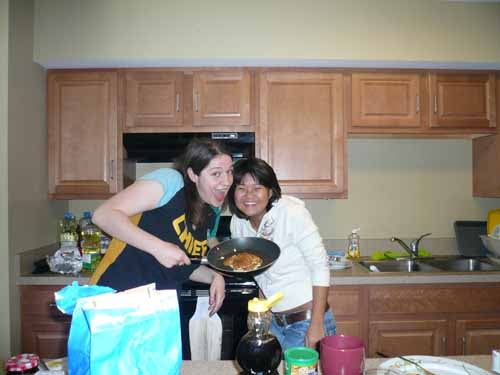 My housemates also hosted Oberlin Christian Fellowship's bible study at our place - which, though I don't really identify with any particular organized religion, was cool by me. I got to meet a lot of new people through them (not to mention great food and leftovers in our fridge on Sunday nights!), feed off much of their positive energy, and see firsthand how much OCF does for the local community. Religious life on campus doesn't always get a lot of attention here, and Buddhism and Judaism may well be the bigger constituencies within that realm - but there is definitely community to be found if you're looking for it! 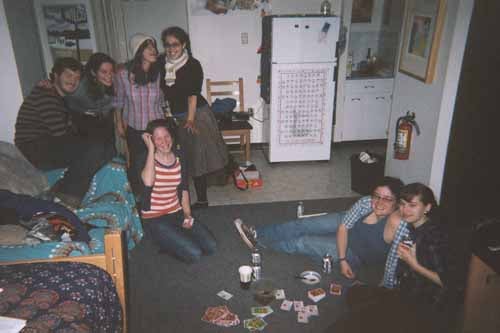 Also considered Village Housing, this "high-rise" building (seven stories - but in Oberlin, that's practically a skyscraper) sometimes gets a bad rap...somewhat sketchy elevators with unexplained telephone-like ringing, very little sense of community, located off the campus entirely...but Seyeon and I both found it to be a fantastic place to live. The apartments themselves are fairly spacious, good for hosting friends; the downstairs lounge just got repainted and renovated this year, and its "downtown" location means getting into the habit of maximizing breakfasts at Black River and visiting the kittens at the Gingko Gallery - which is always a good thing.

wow, that is an amazing sunset!

hey- I'm an incoming freshman, and I was wondering what you learned on your trek all over campus sophomore year and your general experiences in dorms.

I like the idea of a co-op, but I don't know which one! Also, are freshman dorms as crazy as the oberwiki makes them out to be?

Mandy,
If you want an amazing co-op, go to Old B! I ended up living there for a year and a half, and it holds some of my best memories from Oberlin.

I'd say all co-ops are great; they each have their own pros and cons. Tank usually had great pizza night (Fridays), and then it was fun to go to Harkness sometimes when they'd have food outside. I made tofu there one semester!

Yitka,
I studied abroad with Dan and I know who you are by name. I liked this entry a lot :-)

Being a parent of a student who is about to stay at Firelands we had a curiousity question. Did the kitchen come furnished with a refigeraotor, or did you have to supply your own? We appreciate your insight. Thanks, Mike

Mike, since Yitka has now graduated, I'm not sure how often she's checking the blogs. But since the apartments at Firelands all have kitchenettes, I'm sure that includes refrigerators:

(Someone please correct me if I'm wrong.)

Yes, all Firelands apartments include [full-size!] refrigerators. Microwaves, on the other hand, don't generally come with the kitchenettes...sometimes one gets left behind in a unit for the next tenant to inherit, but in my case, I had to bring my own.

(Thanks, David, for keeping tabs on this!)

I am signed up for an open double in Dascomb and I was wondering exactly how much room you have. How big are the rooms? What is the closet situation? And would you recommend having a mini-fridge?

@Anita: Yitka graduated a year ago and isn't blogging for Oberlin anymore (though she checks in here from time to time). But you can find floorplans and other information about dorm rooms on the ResEd website. Here's a floorplan for typical rooms:

You might want to ask one of the bloggers who just finished their first year (Abby, Isaac, Karl, or Tess) the mini-fridge question.