I have been interning at the Bread and Butter Collective, located in Long Island City, Queens, this summer. "What is that?" you bright-eyed readers may ask. Lucky for you, I have a whole post dedicated to the BBC! (not to be confused with British Broadcasting Corporation)

Begin quote: "The Bread and Butter Collective is a group of print makers located in Long Island City, Queens, dedicated to earning their daily bread while creating a space to enjoy life's butter: community, progressive change, and creative process. We offer artists affordable access to silk-screening supplies, equipment, and work with both for-profit businesses and politically progressive organizations and individuals to create printed matter. With the studio as our base, collective members are able to support social change by subsidizing activists with money earned from commercial jobs. In this way, we are able to leverage our skills to earn a living while contributing to our community." End quote. 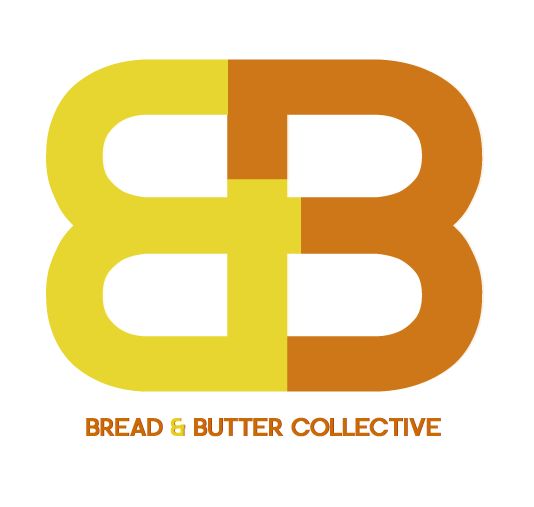 If my BBC history is correct, the Bread and Butter Collective started out as an idea by current members (and Oberlin alums!) Sara, Jolie, Gabe and Asa. The four of them shared a similar fondness for Oberlin's silkscreening studio that stretched beyond simply loving printing. What makes the silkscreening studio at Oberlin great is how it is used as a shared space for those who print. Once one learns the processes and procedures that are necessary to ensure clean printing and to keep the studio functioning, he or she is able to use the studios freely (assuming that these rules are upheld).

It is this kind of trusting community that Bread and Butter tries to emulate. Classes are held every second Saturday of every month and those interested are able to sign up as members and use the facilities thereafter. The BBC is not so much a silkscreening studio that only takes on jobs and orders for posters and shirts, but a collectively owned space that everyone works to maintain and keep running. In return, those who are members are able to use the studio to complete the aforementioned posters, shirts, and other prints. Very cool, agreed?

In addition to offering artists the chance to learn the process of silkscreening and the space to do it, the Bread and Butter Collective does receive and accept requests from people who are in need of screen-printing help, but are unable to do it themselves. The BBC has an interesting philosophy concerning clients that also harks back to printing practices at Oberlin. For most jobs, customers are charged at a normal rate that provides compensation for the artist/printer who is doing the work. However, oftentimes there are organizations or events working for a great cause that might not have enough money to pay for these costs. After all, screen-printing is not exactly cheap for either the printer or the client. For these special cases, the BBC can offer at-cost printing that significantly cuts the cost. This ideology is something I practice as well in my printing endeavors.

So! So so so. So! Enough of this boring stuff. So so sorry to bore anyone with these BBC history lessons and cause any involuntary cases of information overload. I know how much everyone loves pictures to ogle at and links to click on, so onto something a little more interactive.

I was able to get this internship with help from Asa, recent Oberlin grad, T.A. for my silkscreening class this past fall, and one of the founding members at the Bread and Butter Collective. In addition, he was also part of the Oberlin Apparel challenge and was usually in the studio printing when I was.

My role as an intern at the BBC has mostly been to work on web-design-y stuffs and things. One of my bigger duties was to create a new logo for the Bread and Butter Collective, as well as revamp the website. Thus, I bring to you the new BBC website! Conveniently located at www.breadandbuttercollective.com! See that nifty little animation in the beginning? I did that too.

On an unrelated note, what are the origins of that smiley? I've probably been using it for a while now, but I still don't know what it's supposed to be! Is it a cat? Someone biting his/her lip? An upside down bunny? Personally, I like to think it's a seal. However, few people agree with me.

I have a sort of love-hate relationship with HTML coding. I'd compare it to the process of moving in: It's a pain in the ass getting everything into your new room, and that's only half of the battle. The other problem is figuring out how to organize everything in a way that almost makes sense. For someone like myself who gets frustrated with the littlest nuances, it frequently ends up being just that: frustrating. But once everything is done, it's pretty awesome seeing everything functioning.

Additionally, I have used my ways of the web to tidy up the BBC's Facebook page! Please, like our page! I know you have a Facebook. And if you don't, you're either lying or stuck in 2003. Get moving, and make sure the first thing you do is "like" the Bread and Butter Collective. It'll be fun. I promise.

Of course, web stuff isn't my only duty as an intern. I mean, what kind of internship would mine be if I didn't do a little printing, right? To promote an upcoming fundraiser/party for the Bread and Butter Collective, I have made invitations to said party! Behold: 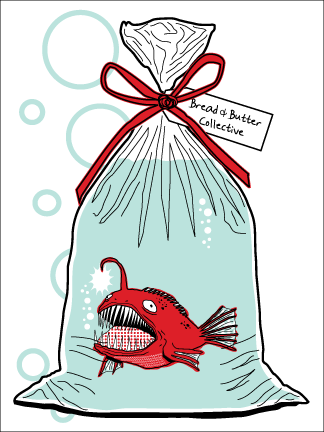 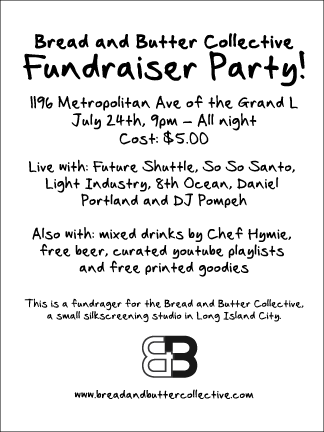 While we're on the topic of this Bread and Butter party, it's time for some shameless advertising! And I'll shorten it to one word: Come! Information can be found on the card posted above. See how I just avoided retyping all that information a second time? Call it lazy. I call it a stroke of genius.

YAY! Sara was in my grantwriting class while they were drawing up the plans and proposals for the Creativity Fellowship, which helped them get off the ground. It's so awesome that you're working with them!

I love the animation, those kids are the coolest, and just from working with them, so are you!

I do hope you understand that you'll be doing all designing/printing for any future theater company that results from this potential professional. Miss you- can't wait till you are once again, on the comfy couch!

I heard about the fundraiser party but didn't get a chance to make it, sorry Karl! How did it go?