My mentor (a family friend who took me under her wing to tell me about college and give me a job at her bookbindery) and her husband (a former Smithsonian archivist) drove me into Washington, D.C. for an interview day. After we found the discretely labeled building, I found myself in a book-filled law office, listening to the entrancing Professor Yolanda Cruz answer questions about Oberlin. I was whisked away to an office, where in a life-changing half hour I met Clyde Owan, an alum who took an interest in me and has since helped to guide and shape my time at Oberlin. Without a doubt, Clyde's recommendations helped me get admitted to Oberlin (twice), and he introduced me to my Oberlin foster-grandparents, Midge and Smith Brittingham. More on that in my Oberlin story.

This was first birthday truly away from home, since I had spent part of my birthday at home when I was at my old university, which was close by. For my first birthday in Ohio, my boyfriend at the time took a train up from Virginia for the weekend. Since I had the day off from my winter term project of training as a docent in the art museum, we bought me flowers and books in downtown Oberlin, watched movies, and ate the cake my mom sent me. (She has some sort of fear that my birthday might be forgotten by those geographically close to me, so every year, she bakes a Funfetti cake, carefully wraps it up, and mails it to me with a package of icing.)

Having spent the free hours of my month cooking and baking in the village house of some swing dancer friends, we had a dance party in their living room (it had lovely wooden floors) and I made venison stew, my favorite dinner, for all my friends who were in town. My friend Miriam made the cake of every little girl's dreams: 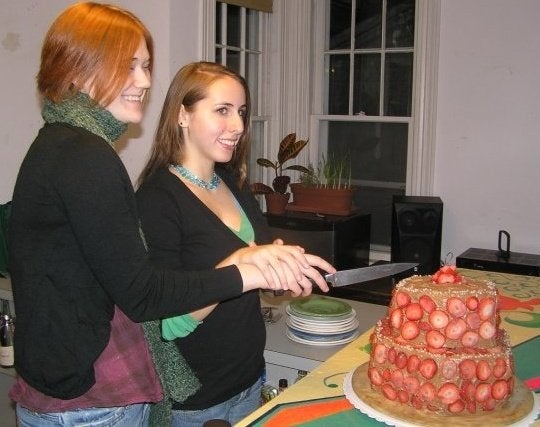 It's no surprise that Miriam is now apprenticing in a bakery in Toronto and attending the George Brown Chef School.

We also ate the cake my mom sent.

Missing the warmth of Virginia, I asked everyone to trek the few blocks to my off-campus house to a Southern-themed birthday party. I asked everyone to dress as they would have if they'd have grown up in the South, I made sweet tea and venison again, and Miriam, now my housemate, made a similarly decadent cake that was 6 layers of red velvet cake. For those of age, there were also mint juleps.

We also ate the cake that my mom sent.

Today, I've brought the cake my mom sent into work to share with my co-workers (Like Ma'ayan, Marsha, and Ben!) I'll take off part of the afternoon to head into Cleveland with Ma'ayan to go to West Side Market, one of our favorite weekend trips, and then to meet up with others at the Velvet Tango Room. Then I'll go to a swing dance in Cleveland, and tomorrow I'll have a dance on campus that I'll invite all my friends who are here for winter term.

My birthdays clearly have a theme: I vastly enjoy spending them in Oberlin, with friends, food, and dancing. Through time, though, they've changed in form just as my relationship with Oberlin has.

Awww, your mom's cake tradition is adorable. Happy birthday -- I hope you have fun! (My mouth is watering at the thought of West Side Market, lucky you :-)

I know you weren't in oberlin then but what in God's name happened in 2007?!

I seriously cried, Brandi, about your Mom's cake! (Sorry Ali, no special cake, but we still have pad thai.)

@Eli- Thanks! I had the most wonderful chicken and rice at West Side, and also mini-cannoli. Delicious!

@Ali- I forced a bunch of my friends from high school to come visit me at JMU so that I'd feel more at home. By then, I was well into my application to transfer to Oberlin.

@Miriam - Your cakes are magical. MAGICAL. I want photos of the one you're making this weekend, too!