I recently had the chance to meet up with a boss I worked with early in my career as a newspaper reporter. I had not seen her in many, many years. But Facebook solved that. Diane Laney Fitzpatrick and I reconnected a little over a year ago.

Once we found each other, we wasted no time time looking for and friending as many of our former coworkers as possible. We dug up old photos and uploaded them and shared our present lives while musing at our past.

Neither one of us is a working journalist anymore, yet we continue to share a passion for writing and for ensuring that our children grow into strong, smart, independent adults. When she left the newspaper, she was a soon-to-be new mom. I was not even married. Fast-forward to 2010: we each have children who are in college and or are preparing for college. In fact, her daughter, Cary, is what brought them from balmy Miami to cloudy-with-chance-of-snow Oberlin. Cary is a high school senior in the throes of the college search.

Once Diane learned I worked at Oberlin College, she informed me her daughter Cary would be visiting this fall. Her daughter plays bassoon and has applied to the Oberlin Conservatory of Music, among other schools. We agreed to have lunch when she and Cary visited the campus for a tour.

We sent messages and updates to one another via Facebook. What's the weather like in Cleveland? Should I bring a heavy coat? (Do I even have one?) Where is a good place to eat in Oberlin? Do I need a car to get around? I posted links to the college website and to a list of local restaurants.

She told me Cary is vegetarian and asked whether or not Oberlin had restaurants that served vegetarian foods. (Are you kidding? This is Oberlin after all.) A colleague suggested Café Sprouts, a new juice bar and eatery that is part of the East College Street Project.

Our only conventional conversation, by phone, was to confirm a meeting place the day they arrived in Oberlin. "I'm at the conservatory, the side of the building facing that big rock." 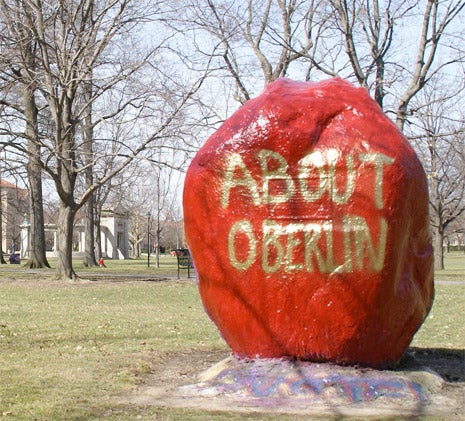 I didn't have to ask Diane what she looked like or what she might be wearing. We said almost in unison, "I could recognize you anywhere. You haven't changed a bit."

The day of the visit, northeast Ohio weather cooperated: about 50 degrees and sunshine, though weather officials earlier predicted a light snow.

We strolled east on College Street and chatted about their initial impressions of Oberlin. Diane and Cary were attracted to the size and variety of the businesses along Main Street and kept referring to Oberlin as a cute little town, and how it was much better than they had expected.

We were soon at Café Sprouts. As we peered into its huge picture windows, we could see the food display case from the street. One look at the day's menu of carrot juice, organic and herbal teas, hummus, potato cabbage soup, and sushi... and I could see Cary was in vegan paradise. 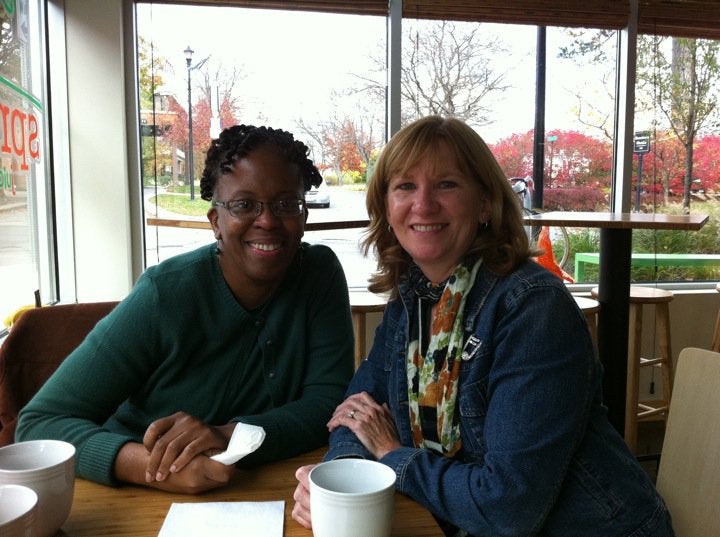 The three of us talked quite a bit about Oberlin and how it compared to some of the other schools Cary is considering. I was surprised as to how easily I talked about this place and knew things that might be of interest: 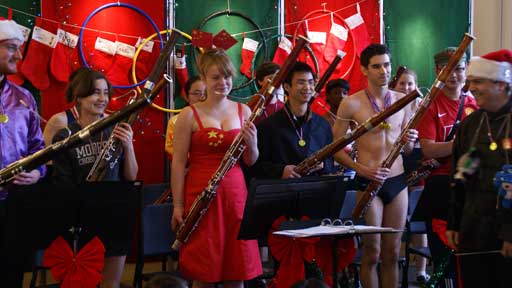 Bassoon Christmas, our vegan co-ops, locally grown foods, our mostly locally owned, non-franchise businesses, and how easy it is (or so I'm told) to find a community of students who will share your interests, social and political causes, quirks.... I also spoke about the many performance opportunities for conservatory students and the supportive and mentoring nature of alumni.

I discovered too often in my conversation with them that I felt as If I was trying to sell Oberlin: "...if being a vegetarian is an important value to you, you'll find a community that supports your choice." And even joked for being a bit exuberant.

As we walked back to the conservatory, I noted one of my favorite places, Ben Franklin 5 and 10 and Mindfair Books. I also reminded them of winters in northern Ohio, and wished Cary well as she narrowed her search.

When we finally parted ways, it struck me almost immediately that Oberlin is not just a town where I drive to work five days a week. In a very unplanned and unconscious way, Oberlin has become a part of me.

Oh man, I really want to visit Sprouts now! It's never been open when I've passed by, maybe I'll pop down during lunch sometime soon.

To Cary, wherever you may be, good luck!