The best part about college - any college - is that there's always something to look forward to. New courses, performances, campus jobs, convocation speeches, or maybe just the specter of graduation are all capable of giving students reason to be excited about being on campus. As I prepare to head back to Oberlin, I can't help but be excited about some of the opportunities that are going to come my way. Here are just a few of the items on my plate that have me chomping at the bit to get back to school:

The rock band I play in, Like Bells, has a really exciting semester ahead. We've got a gig on September 17th at the Grog Shop, Cleveland's premier rock music club, with two Indie bands we really admire - High Places and Stars Like Fleas, the latter of which is playing at Oberlin shortly after the Cleveland gig. We're also in talks to play at even larger venues in Cleveland, though I don't want to say too much about those in case plans fall through. We'll also be playing at a number of smaller Cleveland clubs and, of course, we hope to play the ‘Sco and any number of other campus events.

We'll also be recording a full-length album at Ante Up Audio. Our violinist worked there this summer, and will be able to get us into the studio for free - provided we record between the hours of midnight and 10 am. This obviously poses a number of problems for anyone hoping to have a social life or do well in school, but we're young and resilient and naïve enough that we're actually very excited by the prospect of spending all day in class and all night in a recording studio. Renowned producer and studio owner Michael Seifert (of Dave Matthews and Fountains of Wayne fame, among countless others) has also agreed to lend a hand with album production. Suffice it to say that for someone with aspirations of becoming a professional musician, this will be a fantastic chance to get a taste of what life in the music business entails. Expect to hear a lot more about this as the semester continues.

I've been mulling over a change of major in the Conservatory, and this semester will be when I decide if it's something I want to pursue. The procedure for developing an independent major is a bit more complicated in the Conservatory than it is in the college, and eventually I'll need to produce a pretty thorough written report and course map, which will be evaluated and either approved or rejected by a review board comprised of Conservatory faculty. My major would be called "Contemporary Improvisation," and it would attempt to reconcile the different programs of study available in the Conservatory with the demands placed on performers of modern improvised music. Courses from the Jazz Studies program (in which I am currently enrolled) would still likely form the foundation, but they'd be supplemented with courses in ethnomusicology, 20th century classical music history, composition, and electronic music. It's an exciting but ambitious program to adopt, especially for a double-degree student hoping to graduate in four and a half years instead of the traditional five.

I'll be entering my fourth semester of lessons under Billy Hart. In addition to being a great drummer, Billy has a lot of wisdom to impart about life as a musician, as well as many great and often very blue anecdotes about famous jazz figures. Every Friday I read the jazz listings in the New York Times (the listings are essentially music porn for someone who has grown up in a state that sees one or two good jazz concerts a year, tops) and it's always cool to see where and with whom he's playing. Billy is old enough to be considered an "elder statesman" in the jazz world, and yet every week I see him listed performing with some of the most cutting-edge names in modern jazz music.

I make no secret that I struggle with my lessons and with bebop drumming - I am still new to the instrument, having only started drumming sophomore year of high school and having never taken lessons prior to coming to Oberlin. Billy is a practitioner of what I'll politely call "tough love," a pedagogical method for which I am eternally grateful as it is probably the only way to really motivate me to practice material I would otherwise avoid. It also makes me take a deep, apprehensive breath before stepping into his studio every week. This summer I made a lot of progress on my own and think he'll recognize my improvements, and I'm excited to return to another semester of studying with a musician whom I respect and admire. 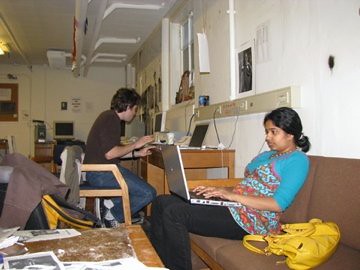 I'll be working at The Grape for the third year in a row, this time editing the "Features" (general news) section. The Grape is, for better or worse, most readily associated with its "Bad Habits" section, which features a bevy of articles pertinent to just about any vice, taboo, or deadly sin imaginable. It's an entertaining section, but it can tend to distract from the fact that The Grape is actually a really excellent news and arts magazine. Our arts coverage is comprehensive, and last semester we were able to secure interviews with most of the major performing acts that came through Oberlin or Cleveland. (These range from Explosions in the Sky to Dan Deacon to an interview I conducted with Ethan Iverson of The Bad Plus.) And though I'm obviously biased, I tend to think The Grape publishes some of the best written pieces of any campus publication, owing to the luxury of our bi-weekly publishing schedule, which gives writers more time to research and edit their articles. The Grape and The Oberlin Review (the Oberlin newspaper of note) have something of a friendly rivalry on campus, although I see the publications as serving two very different campus constituencies and thus competition seems irrelevant.

This one's pretty self-explanatory. This is the election of a lifetime, and I'll be going to school (and voting) in one of the most important battleground states in the US. I supported Edwards during the primaries, something that I'll readily admit even in the wake of the Rielle Hunter scandal. (This summer, while working for Congressman Tom Allen's Senate campaign, I remarked to a co-worker, with just enough irony, that if we'd simply elected Edwards in 2004 none of this would have ever come to pass.) But Obama has had no trouble winning me over, and though I don't gush over him with quite the same crazed fervor of other young voters, I will assuredly be volunteering any spare moment to do whatever I can to help him win in Ohio.