The sun is out for the second day in a row, the thermometer out back says 0 degrees, and it's so dry that five miles to the west I can see the snow-frozen Rockies as clear as if they were a Bob Ross painting. The semester is done. I am home in Colorado.

I want you to understand how fantastic it feels to be here. I can go on forever about homey sorts of things, so I'm going to try compressing to a list format to keep from going overboard. Alright, consider:

a. Student Composers' Concert (I need to stop agreeing to do these at busy times of the year)

b. Collegium Musicum concerts (this is Oberlin's early music a capella choir. Think Renaissance polyphony. I adore this group and its director Steven Plank and will talk about it in depth in a later post)

c. 20-page piece for my nonfiction workshop (mine ended up more like 15, including a page-long section listing what different people in my life do with their non-dominant hand while brushing their teeth. I'm still collecting information, if you'd care to tell me about your habits)

e. playing in horn studio (nothing like being judged by your peers when you're playing atonal etudes in a state of severe sleep-deprivation)

f. Oberlin Contemporary Music Ensemble playing Messiaen's Des Canyons aux Etoiles (a two-night extravaganza. If you haven't heard this piece, it's an hour and a half long, 12-movement musical depiction of the American Western landscape, mostly parts of Utah, and includes as many bird calls as you could possibly ask for. It's good music for those epic moods we all get from time to time)

g. a performance by my woodwind quintet Is that a yam? (for the size turnout we got, you'd have thought we were a quasi-legitimate band and not a five-person twittering machine) 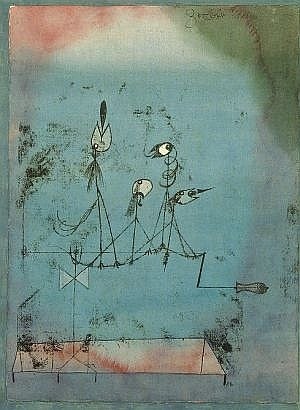 (I was just reminded of this, my dad's favorite painting called "The Twittering Machine" by Paul Klee. Kinda weird, I know. Those are birds, and you'll notice the crank attached to the thing they're standing on.)

i. 25-page portfolio of revised/polished work for my nonfiction workshop. (The "tooth-brushing sequence," as Bernard called it, unfortunately did not make the final cut.)

j. 17 pages of "my best writing" for applications to creative writing workshops for next semester. This mostly involves digging through stuff I've already written, but it's a bit of a stressful process, nonetheless.

k. As you can imagine, all of this does not fit...gracefully...into a week and a half, much less the last week and a half of the semester. By the end of it my brain was a bunch of overcooked noodles and I had no time or energy to do any practicing. It's times like these when the double degree becomes a hilarious proposition, and to put it lightly I was quite ready to be done with everything and sleep for at least nine uninterrupted hours.

a. I was away at a music festival this past summer and have not been home or seen my parents and two siblings since June. This is my fourth year at Oberlin, which is to say I've been officially "out of the house" for a while now, but six months without my family still makes me feel...ungrounded? Being back here reminds me that I have roots, that I'm not just a history-less personality receiving academic and musical training in an unlikely state. Does that make sense? Like I forget sometimes that there's a Nicolee outside of what college demands of her.

b. I turned 21 in July, and since then my older brother Dan has been making plans for the two of us to go out to local bars together. Who'd have thought that I'd be having drinks with the kid who once kicked me when I wouldn't give up the TV remote?

c. I get to practice long tones in the living room while Dad makes lunch and listens to Car Talk in the next room. He tells me that according to ads on TV, I can buy a quarter with Obama's face on it for the low, low price of $19.95. Also, it is not a real quarter and cannot be circulated. Which I guess explains why it's worth more than regular quarters?

d. My sister Lisi has been freaking herself out by reading American Psycho, and from what's she's told me about it, I'm probably better off without 400 odd pages of graphically-depicted torture and murder at the hands of a sociopathic businessman. I'll just stick with straight-up depressing novels, like Ishiguro's Never Let Me Go, which I finished this afternoon. It's good, it's really good, but hooo...

e. Mom keeps trying to unload her old clothes on me, and I have to keep gently reminding her that I have a low tolerance for certain quantities of lace. And high waistlines. And the color pink. And shoulder pads. But she goes out of her way to buy me soy ice cream and tofu and miso soup from the grocery store, so in this light, I'm very willing to continue politely rejecting offerings from her wardrobe.

So in sum: I'm very happy to be home (don't get me started on my airport adventures that got me here) where I can eat, sleep, practice, and read whatever the hell I want until January 2 when I head back for Winter Term. Which is a story for another day.

What's the VERY FIRST thing you do when you get home?

I don't have any homecoming habits, if that's what you're asking. I had to think for a while before I could remember what I did when I got home this year. My dad likes to save money by booking me flights with funky connections, but this time around, delays/cancelations/snow/etc. made for a 14-hour airport horror-show that I had to endure before getting home, so I was pretty out of it by the time I walked through the front door. I'm pretty sure the first thing I did (after clearing my mom's 30-year old beige trousers off my bed) was make toast. I REALLY wanted some toast. With peanut butter. I felt a bit protein-starved after a day of trying to find vegan food in airports. Also I said hello to my sister. While eating toast.

A survey of the self-directed projects I completed in my first two years at Oberlin.