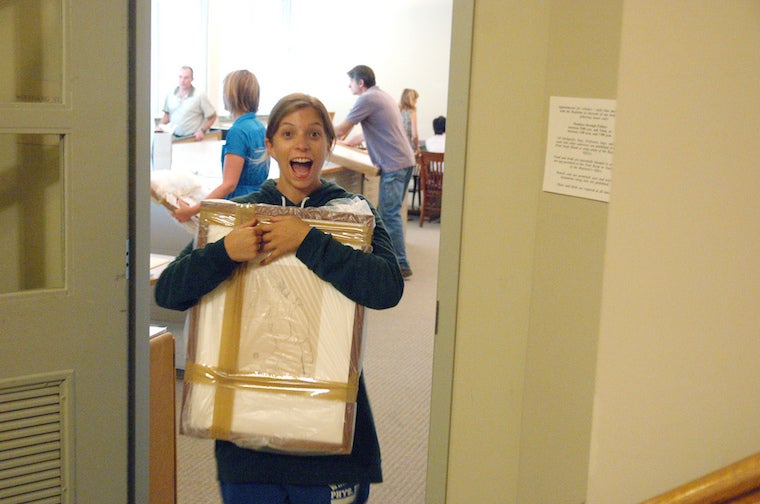 Normally I don't condone ditching classes, work, and meetings, especially all on the same night, but circumstances were special this week. I had never done Art Rental before, and this was possibly the last time I could participate, so I decided to go all out.

Some background: Art Rental is Oberlin's one of a kind program that actually lends priceless works of art to students. We have the third best college art collection in the country, and our gorgeous museum doesn't have room to show them all at once, so hundreds of pieces are rented out to students every semester. The rental collection includes four Picassos, a Miro, a Dalí, two Chagalls, two Goyas, two Toulouse Lautrecs, two Warhols, and countless other amazing pieces. Incredibly, in the many decades that the program has been going on, no piece has ever been lost or harmed.

On Wednesday, just after my morning classes, I headed to the art rental preview--an opportunity to view all 400-odd pieces in the art rental collection and scope out which works I wanted. I had originally planned on coming back in a few hours, but when I saw that there were four people already in line at noon, I dashed home to pack, ran a few rapid errands, and returned secure spot number five in line. Since people are let in to grab their works in groups of five, I had managed to land myself in the very first bunch!

I passed most of the afternoon doing reading for classes and playing cards with my neighbors in line. People really started pouring in after dinner. Tents sprung up everywhere, people broke out snacks to share, impromptu games started between friends and strangers. Someone started bumping some techno. Several groups (yours truly's included) ordered pizzas delivered straight to the museum. Not a bad party for a Wednesday night! Finally, sometime after 3 a.m. we all crawled into our sleeping bags and drifted off, dreaming of the art that would soon be ours. 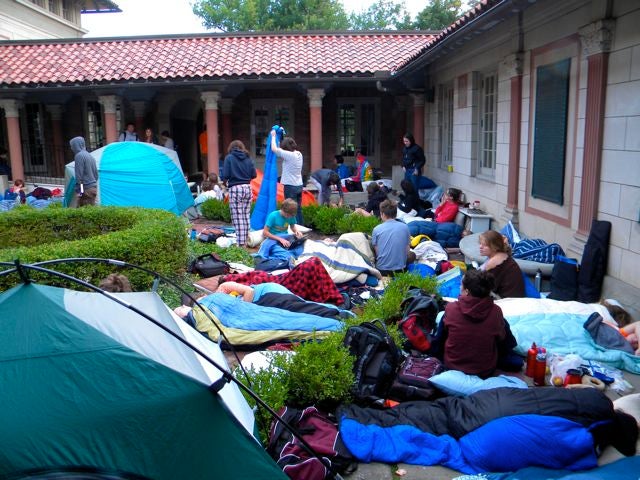 I woke up just before 8 a.m. to the sound of tents and bags unzippering. We groggily lined up, reviewing on little maps where our desired painting lay in the collection, so we could run right to them when the time came. I had originally planned to grab a Goya and a Picasso, but at the last minute a Toulouse Lautrec ink sketch of a very mannish woman putting on makeup called to me. 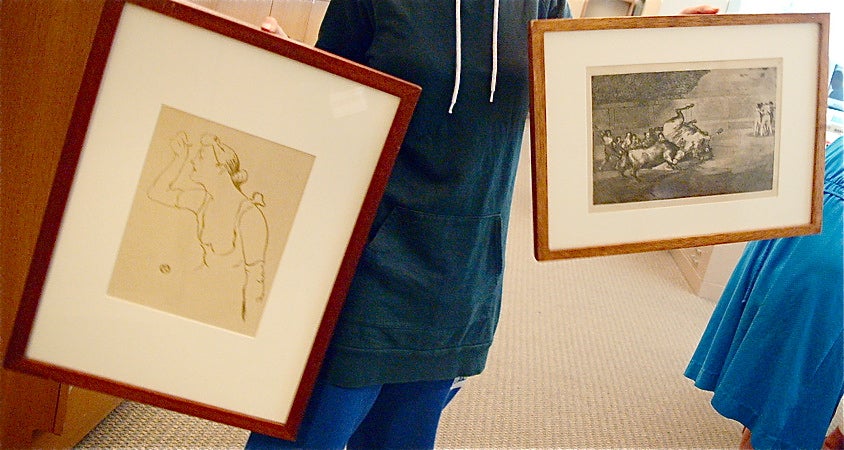 Exhausted, but elated, I stumbled (carefully) home with my art, only to leave soon after for class. I spent the rest of the day (and I'll probably spend the rest of the semester) bragging and showing off my works, or simply gazing at them, appreciating Goya's expressive faces or Lautrec's use of line. I actually know next to nothing about art, but I do know that I'm very very happy I go to Oberlin.

Alice, that first picture is really, really funny.
Also, I'm pretty sure that one of the pieces you're holding (the one on the left) in the last picture was the room of a friend of mine sophomore year. It's a small, small (art) world.

(I'm super happy you used them, despite the fact you weren't too excited to be in them that early in the morning. Priceless faces :D)

Alice, it is wonderful to read about your art rental experience. I have been wondering how early you guys line up there and whether all the art goes... Faculty and Staff are allowed to go for the same thing a day later, but I was told nothing is left!

Hi Alice, Thanks so much for your wonderful blog about Art Rental! It was very, very successful this year. Just one quick clarification: the Art Rental collection is a separate collection from the museum's permanent collection. The rental collection was created especially for the purpose of being loaned out to students. There is more info on the history and background of Art Rental at the link provided.

That's amazing how none of the pieces have ever been lost or damaged! What a caring community :)