As I am employed as a tour guide, admissions intern, and creative writing intern, "All Roads" is pretty busy for me.

7:30
My day started pretty early so I could finish organizing a piece for my Independent Writing Project with Chelsey "Fabulist" Johnson. The story is a neo-noir dystopian suspense case chocked with the most horrible things my brain can spew. Our heroine, a hapless detective, gets a case involving blackmail, pornography and addiction. It's dark, but fun. 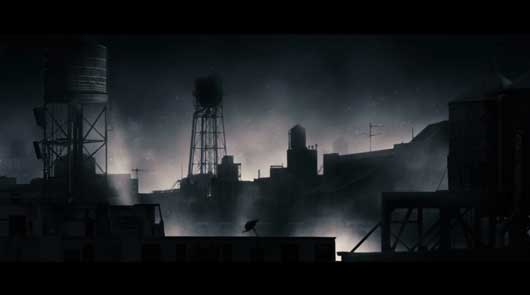 I'm a huge fan of noir -- for two years, I worked on "The Dead Hear Footsteps," a radio noir drama based on the misadventures of Hardin Lovelace, private eye. Each week, we met, composed a story, and divided up the script into 4 parts. (Note to self: I need to write an epic blog entry about "The Dead Hear Footsteps," stat.) Then, on Sunday, we acted them out on WOBC.

For me, writing a noir novella is like eating candy covered in rainbows. Dark, sinister rainbows, frosted with vice.

9:00
Chelsey and I met at Black River Cafe for some coffee/workshop. She gave me some spot-on advice and helped me plan out the rest of the piece. It's also so much nicer to meet in a cafe than on-campus. It's more informal, and especially at 9:00AM, informal is key. Chelsey's been really excellent in terms of character-building, which is something I need a bit of a hand with. Most of my time has been doing narrative construction, and making cohesive stories, then adding flow, style and authorial effects. Her thoughts are damn helpful.

10:00
I lead a Creative Writing info session for admitted students. We run into an odd issue... In the room we have, we can either sit on the comfy couches, or at the conference table. The conference table is very official; the couches are lovely. We start out on the couches and inevitably, too many people show up, and we end up with rows of people behind the sofa.

For 40 minutes, I attempt to explain the department, trying to sound neither too casual, nor too formal. Generally, I try to be funny a bit too hard, and just end up sounding crazed. I recognize how not to sound like I'm off-in-the-brain, but I figure in a room full of writers, there's a bit more appreciation for zaniness.

FAQ:
Applications? What?
- Yep, upper-level Creative Writing classes require applications.
Why applications?
- Classes of stronger writers, more focus.
Will I, hopeful prospie, get into classes?
- Yes, if you work hard.
Is it worth it?
- YES. Also: YES.
Why so emphatic?
- Our teachers are amazing, supportive, and super brilliant.
Will they like my work? I like experimental, genre, lyrical, fantasy longforms?
- Yes.

1:00
After lunch, I worked at Admissions, running from place to place, making sure no one got lost going to a panel and such. Interviewed some ridiculously cool juniors.

4:30
TGIF! TGIF (Thank God It's Friday) is a giant outdoor shindig in Wilder Bowl, around 4:30 on Friday. Bands and DJs rock out; circus folks bring out props so we can have office hours; vendors sell jewelry, drinks, and food. And people hang out, dance and talk. It took me a few minutes to adjust to the crowd -- it felt as if half the school was out on the grass. The sun poured down, reddening my shoulders. Sunburns abounded. (Photos below!)

TGIF, especially after winter, heals us all. The Happy Meter at Oberlin breaks 100 whenever there's sun.

8:00
After dinner, I went to contra dance! This weekend is the Dandelion Romp, a contra festival. During the day, there are workshops, and at night, dances! Conferences mean experienced dancers and more complex numbers. Given contra's set up with a caller who leads the dance, the complications of the dance are determined more by one leader than by each couple. The bands were phenomenal. Though music at Oberlin is hard to beat, having a band like Dr. Grove or the Syncopaths rocking out the crowd was brilliant.

We would walk through each number quickly before dancing it, and the patterns were amazing. We did mixers and "square sets" and broke down into one-two formations...
I saw two prospies from the Creative Writing session again, having just come from an Improv conference next door.

On Saturday, I danced for four straight hours of contra.

11:00
But on Friday, I left early to go to Reefer Madness. If you aren't familiar with the show... fix that. It's an amazing musical, based on a 1936 exploitation film about the evils of "marihuana": manslaughter, suicide, rape, and murder. In the '70s, the film proved fascinating situational comedy for casual weed-smokers who noticed that they hadn't become cannibalistic murderers after having taken a few hits. Given the nation's ridiculous views on weed, the comedy is still pointed. (Disclaimer: Pot is illegal in Ohio.) 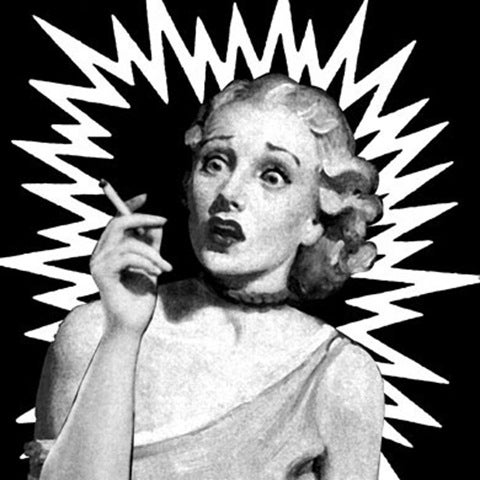 The show here set the production in a high school, as a riff on high school productions. The show stars Mary and Jimmy, two all-American kids, doomed due to the interference of the devil's weed. A lecturer explains their grisly fall into madness and death. The dance numbers were amazing, the lighting was great, and all of the dream sequences were really well done. What's wonderful is how fun and terribly offensive the show is. Shown in the light of 1930s beliefs on home, family, and America-for-Americans, our own little hypocrisies become similarly foolish. I laughed so hard my face hurt.

It was terrific to Jill and Holland up there, being amazing. Jill was Mae, the girlfriend of the show's antagonist, a ruined addict "it's too late for me, honey!" who still keeps her dignity. Violently. Jill's ability to make a sad character really, really funny was keen.
Holland was Mary Jane, the protagonist/Juliet of the piece. Holland is a tour guide and a fantastic human over all; I hugged her very, very tightly when she came in to give the 10:00 tour. 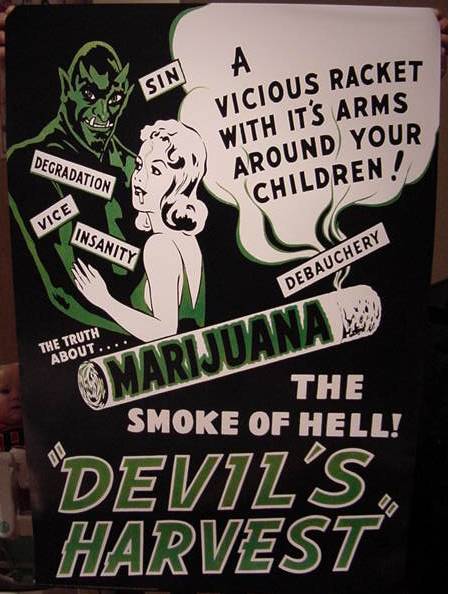 2:00AM
Got home! At which point, Yoshi and I got home, still rather giggly, and saw this amazing TED talk. Check it out: cancer-fighting beer, bacteria-instead-of-kidneys, and how tech can save us all. 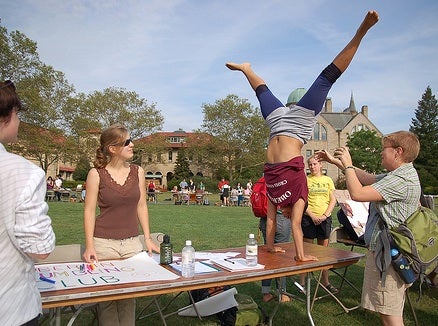 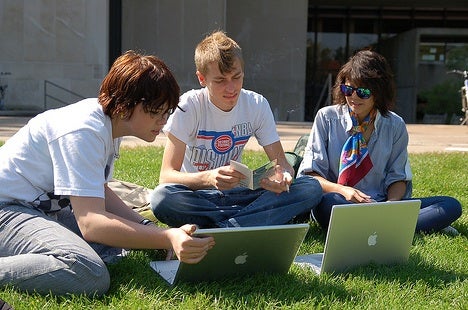 Ahhh! I'm in this...I'm one of the "creative writing prospies" that you saw at contra dance. Wow, I feel great now.

Yay! Yeah, I wanted to give a more blatant shout-out, but I still feel a bit creepy doing so. I'm getting over it, just slowly. I'm sorry that the improv wasn't so grand-- the next day was Oberlin groups being crazy and grand.

Haha, that's okay. Well, I'll be seeing the Oberlin groups NEXT YEAR! Yes. I loved reading this entry because I experienced in some form or another pretty much everything you mentioned here. This is great.

Sweet! What was your favorite part of the visit?

Pretty much everything! When I visited a class the students were very friendly and enthusiastic. The play, of course, was great as well. It's great to meet people who are so passionate about so many things.

Cool! I had a similar experience, only tempered by chilly rain.

What class did you visit? I always have trouble rec-ing classes for folks to visit as so many have classes based on readings.

Yeah, we really got lucky with the weather. Actually I visited that one creative writing class you told us about. The freshman class that you said wasn't very typical of the creative writing major. The workshops sounds wonderful (I love the idea of being with a small group of the same people), but this class in itself was very cool, too.

My opinion of 100-levels is entirely hearsay (heresy?)-- so I'm glad you liked it!

Haha!
Well, let me change what I said before. My favorite part of the visit was when my mom, on the way home, turned to me and said, "Didn't you think Aries was kind of obsessed with comic books?" That's my mom for you...gosh, I can't wait to move to Oberlin.

I am *actually* obsessed with comics. It's a problem. Part of the issue is that I just finished a Grant Morrison comic that day and I was thinking about my Graphic Narrative course with Dan Chaon.

Also, I storyboard all of my written work.

Haha that sounds awesome! I wish I had an eye for visual art of any kind. I can't draw to save my life.