Readers of this blog may know that for the past couple of years I've been gearing up to teach on the Oberlin-in-London Program this spring (if you didn't know that, then you'll probably want to take a look here and here). Many months of planning and organizing and anticipating later, suddenly the thing is actually happening! 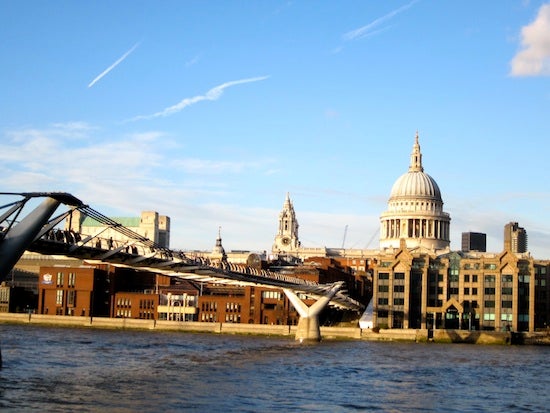 I arrived in London just over two weeks ago to get settled into my flat and learn my way around my new neighborhood (South Hampstead, in case you're interested) and make final preparations for classes--working my fingers to the bone, you know. Well, that and wandering around with my camera, discovering things like this: 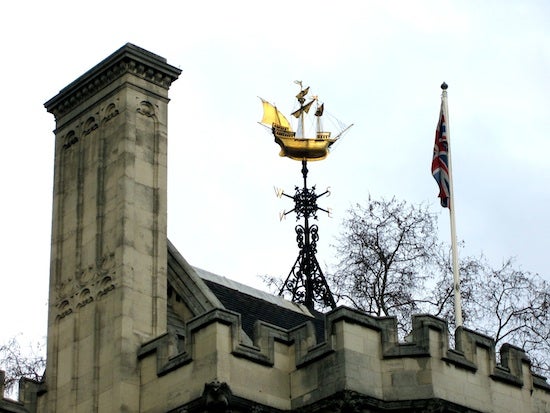 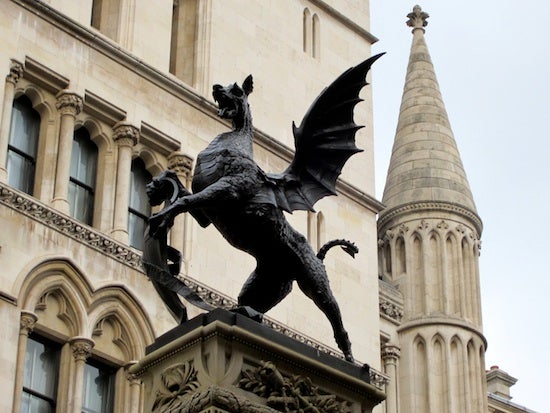 London is crammed with fascinating objects and buildings and people everywhere you look, and I'm learning that having a camera (especially one small enough to carry everywhere without thinking about it) really helps me look at them.

Just over a week ago, the students showed up. You know the feeling when something that has existed only in your imagination suddenly starts to take shape in reality? Well, that's exactly what the past week has been like. We had about four days of orientation, in which we plied them with pastries and caffeine in order to keep them awake enough despite their jetlag to absorb some information necessary to function well in London. They were also negotiating complex transitions like meeting new flatmates, and figuring out British currency and plumbing, and mastering the intricacies of the ticketing system for the London Underground, all of which can be more stressful than you'd think. Fortunately, everybody seems to have remained remarkably cheerful and engaged through the whole process.

And it wasn't all hardcore information. The trustees of the London Program invited us to a reception in elegant law offices high in a new skyscraper in Spitalfields, with spectacular views. We took a tour of the Houses of Parliament, which seemed equally appropriate for our studies of British politics and of theater. We weren't allowed to take photos inside, but here's what we looked like on the way in: 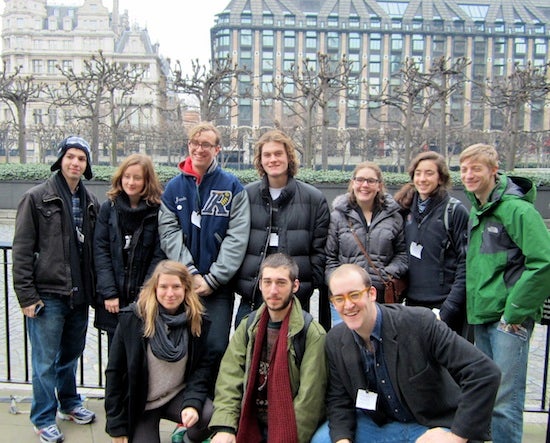 These students showed up first, while the others were still going through airport-style security. Don't they look happy to be here, even the jetlagged ones? 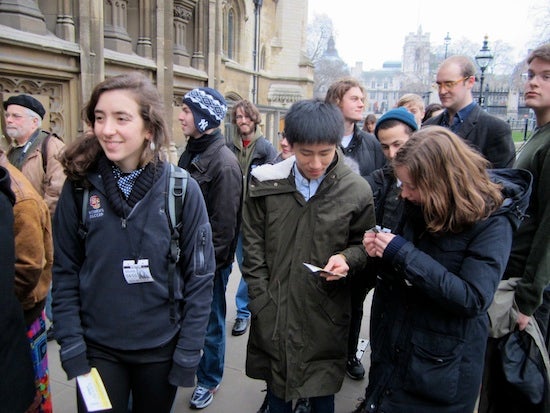 We went for a spin on the London Eye, that huge Ferris wheel on the south bank of the Thames that offers amazing perspectives in all directions: 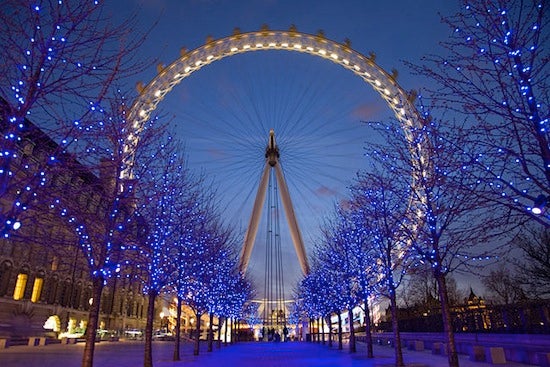 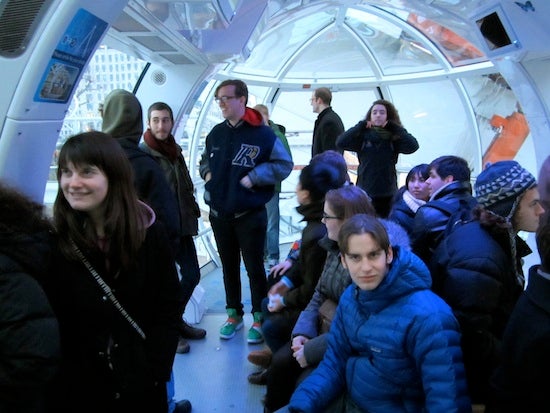 We had a pod to ourselves. Much hilarity ensued. 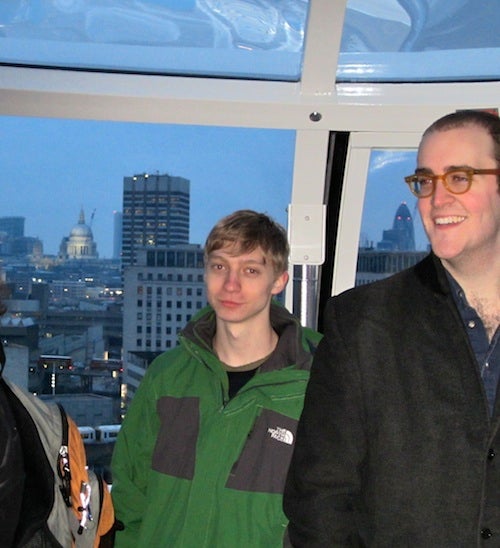 That's St. Paul's in the distance. 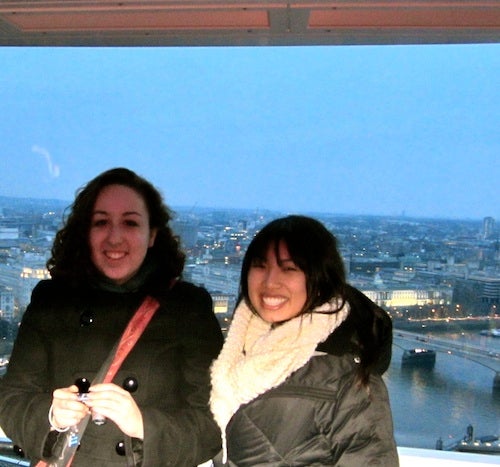 Dusk was a perfect time to see the lights on the bridges and stretching to the horizon.

At this point, everything's an adventure, including taking the Tube: 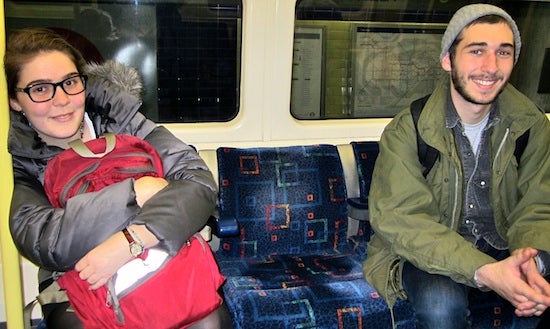 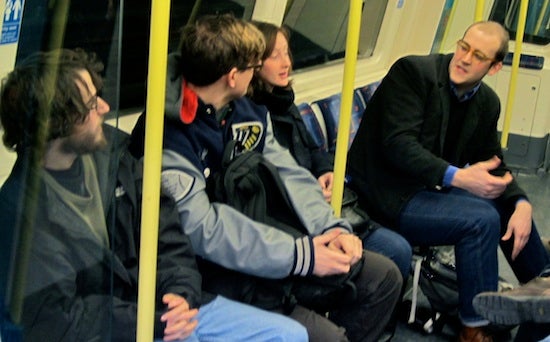 Eventually, much of the routine of getting around the city will come to seem pretty straightforward. But my experience is that new adventures will keep turning up as winter turns into spring, and that as the students begin to feel less like tourists and more like residents, their engagement with London will deepen. The students in the English program are required to write in their journals five hours a week, and part of the point is to make sure they're processing their experience as thoughtfully and responsively as possible, so that they can keep track of their changing perceptions.

Classes started this week, and I have to say I'm feeling really excited. At the risk of jinxing something, the 14 English students are already living up to my very high expectations. (I don't at all mean to imply that the 11 politics students aren't--they just haven't been in class with me!) In the Modernism class, they talked about E. M. Forster's Howards End with a great deal of subtlety, insight, and sensitivity; everybody participated from the first day, and the discussion felt cohesive and substantial. (Not qualities always easily achieved in the first week of a semester, even among very talented students.) And in the London Stage course, we had quite productive discussions of the first two theater productions we saw: a beautifully judged revival of Michael Frayn's hilarious meta-farce Noises Off at the Old Vic, one of the most famous theaters in the world: 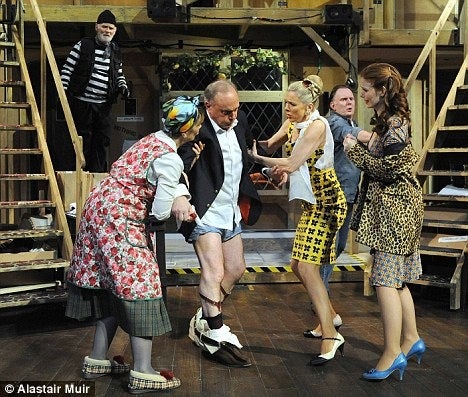 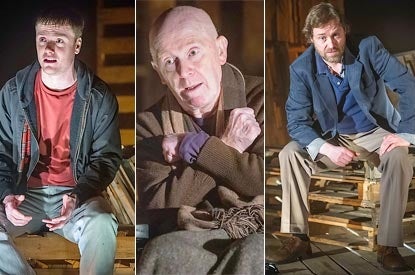 In addition to our consideration of the inherent stylistic and structural differences between the two plays (intricate farce vs. quiet introspection, elaborate physical comedy vs. intense immobility), we paid a good deal of attention to the effects of theatrical space on the audience's experience--which was of course my intention in pairing them at the beginning of the course. London offers such a variety of theatrical opportunities that by the end of the semester our range of reference should be really substantial. Needless to say, I'm psyched, and I can't wait to see where we go from here.

But please don't just take my word for it. Ever since they arrived, a number of students have been blogging about their experiences in their new home on the London Blogs. Check them out!

This is wonderful, David; I can't wait to hear more! I wonder if a little pub called The Holly Bush is still in Hampstead? Great place to read a book or write a letter over a pint.

I actually haven't been up to Hampstead proper yet, Chris--I've been too busy! Also, it's been uncharacteristically cold lately. But I'm looking forward to walking up there once things settle down a bit. The Holly Bush does indeed still exist, and I'll pay a visit in your honor.

Brought back such memories reading this! I still have my journal and read it every once in a while, and those plays we saw immediately leap from the page. What a wonderful semester they have ahead of them!

Noises Off is one of my favorite farces. I've seen it staged twice and I just giggle when I hear the name. A truly brilliant piece of theater.