For the first time in recent memory, both of the college’s Ultimate teams have qualified for the National D-III College Championships. The men’s team, The Flying Horsecows, were the second seed and finished in first place with a record of 8-0 at their regional tournament, and the women’s and trans team, The Preying Manti, were the top seed at their regional tournament and finished first with a record of 5-0. The championship tournament will be held on May 19 and 20 in Rockford, Illinois.

Learn more about Ultimate from the team captains in this Q&A.

Q: For those who aren’t familiar with Ultimate, how would you describe it?

EM: Ultimate frisbee is played on an outdoor field with two end zones. There are seven players from each team on the field at once. You cannot run with the disc. To score, you must catch it in the opposite end zone. To begin each point, one team will "pull" (throw) the disc to the other.

JA: Aside from the fact that Ultimate is its own distinct sport, what sets it apart from others is that it is self-officiated. This means that there are no referees and other than observers who help with in and out of bounds calls during the big games (such as tournament finals and the national tournament), all calls are made by players on the field.

Q. Are there any misconceptions about Ultimate that you can dispel?

EM: That it's not a sport—or it’s a sport for dogs.

AC: That it is always a casual game, and that it can't be played at a high level of competition. Yes, there are professional Ultimate frisbee teams.

Q. Your teams went undefeated at your regional event and qualified for nationals. To what do you credit the sweep?

EM: I credit our wins to the team's ability to work together and work hard. We have improved tremendously this year under the steady leadership of Ally Fulton, our coach (and a former Manti). Additionally, both Abby and I played on club teams last summer and were able to bring back lots of new ideas to the team such as drills, plays, and fitness.

JA: A huge part of our success this season is thanks to our coach, Jess. Since joining us in February, she has made key decisions both during games and in practice that have helped us to find the rhythm we are in. On top of that, the entire team's willingness to follow her lead and put in work on their own time has helped with our growth and allowed us to become a strong team.

Q. What’s been the most memorable moment of the season?

AC: During spring break, we travelled to Myrtle Beach in South Carolina where we played a fun, non-sanctioned tournament. We beat every team in the division by at least six points in each game. The finals against Princeton A was a close game with a lot of wind. While we lost the final game by one point, we felt incredible joy at the end of that day—so much so that many of us cried out of happiness. We were grateful for being able to share the field with each of our players and watch them grow a month's worth in one week.

NF: The most memorable moment was when we beat Brandeis on universe point—the last point of a tied game that decides the winner. This win came during the Midwestern Invite, during the quarterfinals. It was at this point that I realized that our team had the potential to make it to nationals; it was the spark I believe we needed.

Who is Creg Jantz?

Thanks to a teammate’s practical joke, Creg Jantz was called Simon Jantz throughout most of his college years. But as his mom would often say, “If that’s the worst thing that happens to you in your life, consider yourself lucky.” Learn more about Jantz, including why the press box during an athletic competition is one of his favorite places in Oberlin, in this installment of Who Am I? 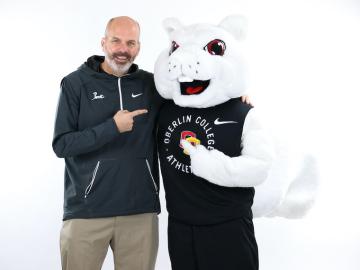 This Week in Photos: Winter Games

A large flat puck glides down a long plastic rink. Where this disc lands will determine the next move so the players watch intently as it slides. This friendly game on a cool winter day serves as inspiration for this week’s photo series. 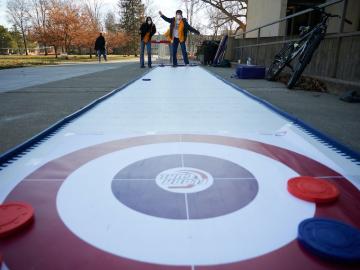