What are the goals of endowment investing and how could they be affected by divestment? Is divestment from companies with whose practices you disagree an important way to effect positive social change, or is it problematic? Is socially responsible investing as simple in practice as its name suggests? What can we learn from past efforts to divest?

These and other issues surrounding investment and divestment have been in the news recently—on campus and in the wider world—and members of the Oberlin community, on campus and off, have participated in the discussion.

“The symposium is one way for Oberlin College to do what institutions of higher learning should do: explore difficult issues from a variety of perspectives,” says Joyce Babyak, acting dean of the College of Arts and Sciences. “We are fortunate to have experts in related fields come together to share their expertise, articulate their views, and help attendees think through these complex issues.”

The panelists include two members of the campus community, two alumni, and four other experts in the field:

Eve Sandberg chairs Oberlin College’s politics department and is president of Strategic Research Inc. For more than three decades, she has been active in policy advocacy, election campaigns, and policy research in the United States and abroad. Sandberg was active in the anti-apartheid movement from 1978 through 1990, testifying before state legislatures, fire and police pension boards, organizing major public events and advocacy initiatives in tandem with activists and elected officials. She wrote the first background briefing on southern Africa for the Dukakis for President campaign. In the early 1980s, she served as the Connecticut representative on the national coordinating board of five major United States anti-apartheid organizations.

Jainen Thayer joined Oberlin College as the chief investment officer for the endowment in October 2012. He brings nearly 20 years of experience in the financial services industry to the investment office, including several years spent with a large bank in northeast Ohio. Prior to Oberlin, he served as a director of investments for New York University, and before that position spent several years as a senior member of the investment team for a large alternative asset manager based in New York.

Anders Ferguson ’75 is chief strategist and partner with Veris Wealth Partners, an independent investment advisor focused on sustainable investing for families and foundations. Veris believes that "Sustainability Matters" and those companies, families, and endowments implementing green and responsible practices are leaders of the future. Ferguson brings 30 years of entrepreneurial experience to Veris across a number of sectors of the sustainable economy. He co-built four companies in the sustainability field, was involved in the sale or purchase of a dozen sustainable firms, and has served as a partner/advisor to three investment banks and consulting firms.

Tamara Cofman Wittes ’91 is a senior fellow and the director of the Saban Center for Middle East Policy at the Brookings Institution. She served as deputy assistant secretary of state for Near Eastern affairs from November 2009 to January 2012, coordinating U.S. policy on democracy and human rights in the Middle East for the state department. Wittes also oversaw the Middle East Partnership Initiative and served as deputy special coordinator for Middle East transitions. She was central to organizing the U.S. government's response to the Arab awakening. Wittes is the author of Freedom’s Unsteady March: America’s Role in Building Arab Democracy.

As senior sustainability analyst with Calvert Investments, Inc., Paul Bugala heads environmental, social, and governance (ESG) research and advocacy for the oil, gas, and mining industries. He has been a member of sustainability advisory groups for Suncor Energy, Newmont Mining, and Sunoco. He is a member of the United Nations Principles for Responsible Investing (UNPRI)/Carbon Disclosure Project’s Carbon Action Initiative and UNRPI working groups on ESG integration and the rights of indigenous peoples. Bugala is a member of the U.S. Extractive Industries Transparency Initiative Multi-Stakeholder Group, appointed by the Secretary of the Interior, and of Amnesty International USA’s Business and Human Rights Advisory Group.

Lawrence Davidson is West Chester University emeritus professor of history. His academic research focused on the history of American foreign relations with the Middle East. He taught courses in Middle East history, the history of science and modern European intellectual history. He is the author of several books, including Islamic Fundamentalism—An Introduction, America’s Palestine: Popular and Official Perceptions from Balfour to Israeli Statehood, A Concise History of the Middle East, Foreign Policy, Inc.: Privatizing America’s National Interest, and Cultural Genocide. On his blog, To the Point Analyses, he describes his political views as “… a left oriented critique of American society and its behavior in the world.”

Ari Ofengenden is director of the Hebrew program and assistant professor of Hebrew at George Washington University. The author of The Passion for Absence in Abraham Shlonsky and Shlonsky an Introduction to a Hebrew Modernist, he has written numerous articles and book chapters on Hebrew poetry, contemporary Israeli culture, Zionist thinkers, and literary theory, as well as on Jewish literature. He studied for a master's degree in psychology at Tel Aviv University, then wrote a PhD dissertation on Shlonsky at Haifa University and at Tübingen. From 2010 to 2013, he was visiting assistant professor of Hebrew and comparative literature at Oberlin.

Sarah W. Peck is associate professor and chair of the finance department at Marquette University. Her research interests are in the in the area of ownership structure, leveraged buyouts, board of directors, and other topics in corporate governance. Peck developed and currently teaches “Investment Management, Ethics, and Society,” believed to be the first course of its kind and offered in Marquette’s Applied Investment Management Program, the first undergraduate business program selected as a Program Partner by the CFA Institute. She has written a textbook, Investment Ethics, and ethics cases for the CFA Institute. 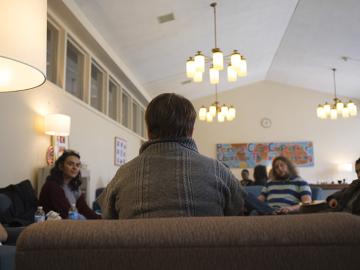 Black History Month 'Sankofa: Go Back and Get It'

Monthlong tribute themed “Sankofa: Go Back and Get It” includes a broad array of programs, performances, and talks to highlight the black experience in America. 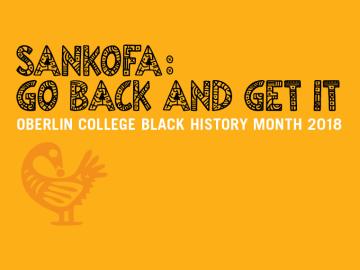 Before winter break, a group of students submitted a document addressed to me, Oberlin’s trustees, and our senior leadership containing 14 pages of demands for institutional action. This address is in response to that document.
View all Campus News stories