To the Oberlin community:

At the December 4, 2015 meeting of the Oberlin College Board of Trustees, the Board decided to rescind the honorary doctorate of humanities presented to Mr. William Cosby in 2010. Mr. Cosby’s admitted actions are not congruent with Oberlin College’s commitment to supporting survivors of sexualized violence, as reflected in its sexual misconduct policy, and do not epitomize the high standards Oberlin considers in awarding honorary degrees.

After two sessions of Round One competition on Monday and Tuesday, with all seventeen violinists performing 30-minute programs, jury deliberations in the 2022 Cooper International Competition for... 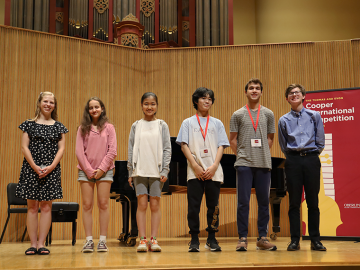