This year marks the 50th anniversary of what is now the Africana studies department and the creation of a physical space on campus dedicated to those with an interest in Afrikan heritage. To recognize the occasion, programs, performances, and talks will take place throughout the academic year. See the evolution of Afrikan Heritage House.

One of Lillie Johnson Edwards’ ’75 most indelible memories of her time in Afrikan Heritage House, at the time called Afro-American House, was the enormous support and camaraderie felt when she and five other women living in the house made a pact during their junior year to support, nurture, and mentor one another.

The professor emerita of history and founding director of African American/African Studies at Drew University explains, “During the week, we would all get up at 7 or 8 a.m., have breakfast together, and then go to Carnegie Library when the doors opened to study. Then, in the evening around 10 or 11 p.m, after we each had a few hours of non-stop work, we would slowly emerge from our rooms to have a touchstone of encouragement together—or maybe even do something fun or silly—then we’d go back and see how long we could continue to write papers or do chemistry homework.”

Edwards says The House was key in this effort to support one another and foster experiences like hers. It provided a setting for students to develop a sense of community and gave opportunities for meaningful interactions. “This experience was born out of the sensibility of family in Afrikan Heritage House—much more than in dormitories and even much more than if we were just friends,” says Edwards. “We felt an enormous sense of obligation and responsibility to, and for, each other.”

A brief history of the department and house

In November 1968, the General Faculty of Oberlin College approved the establishment of an Afro-American Studies Program whose purpose was outlined as: “fostering understanding of the unique ‘Black Experience’ in America; enriching the educational offerings of the college by providing all students with the opportunity for extensive work in this area of study; increasing the relevance of an Oberlin education to the Black community and the larger society of which it is a part; heightening the awareness and appreciation of African history and cultures.”

In 1969, space in Talcott Hall was allocated for those with an interest in African heritage; just a few years later in 1972, the Lord-Saunders Program House was opened and became what is now known as Afrikan Heritage House.

In the 1969-70 academic year, the Afro-American Studies Program was officially launched, and it evolved into what is today’s Africana studies department. While not an academic major at the time, the program drew on the work of numerous departments. It also appointed new staff members to aid in the program’s implementation.

According to Constructing Black Education at Oberlin College, written by Emeritus College Archivist Roland M. Baumann, there were a few reasons for the program’s beginnings. In 1964 under the direction of President Robert K. Carr, the college undertook vigorous recruitment efforts of Black students. The college introduced a Special Educational Opportunities Program for disadvantaged seventh- and eighth-graders to provide them with additional training on campus for eventual college work. The college also sought and provided increased scholarship support for Black students, funded in part by the Rockefeller Foundation. With the increase in the number of Black students on campus, paired with the turbulent social climate of the late ’60s, it became apparent that additional support was needed.

The genesis of both the house and the department was spurred by the Oberlin College Alliance for Black Culture (OCABC), a student organization in its nascent stages. The group was formed in 1967 by students taking collective action on their own behalf, during a time of particular challenges for students of African descent, both on campus and in the United States.

Those students’ initial priorities included creating conditions for improved academic performance, discerning college policies and intentions, and laying the groundwork for becoming full participating members of the college community. The OCABC was also a major creative influence on campus and was responsible for various cultural activities and programming, including Black Culture Week in February.

A little more than twenty years after the creation of the program and residence, Associate Professor of Theater and Africana Studies Justin Emeka ’95 lived in Afrikan Heritage House. For Emeka, the house served as the center and foundation of his Oberlin education. It also taught him the function of education and community.

The house serves as a center of Black culture on campus. Through the years, it has been responsible for a broad range of activities designed to advance community-wide knowledge of the Afrikan heritage, including soul sessions, art shows, poetry readings, and the Kuumba festival.

The soul sessions were particularly moving for Edwards, and she recalls the excitement of students squeezing into Lord Lounge to encircle the performer, along with the mental boost she received from the experience.

“I remember thinking, where else in the world would I hang out with people who sing opera? For someone who grew up in the segregated South in Columbus, Georgia, then heading to Oberlin, Ohio, I had never been to an opera,” says Edwards. “But there I was, sitting in a soul session, listening to violinists, poets, and opera. I felt the enormity of the talent. I found it magical. It’s the kind of magic that keeps you going when you feel discouraged.”

When Edwards left the house for North campus her senior year, she explained the reason for her move: “I felt so secure, so well taken care of, and I had such a strong sense of community that I could move farther outside of the community—it was because of it.”

Browse a photo gallery to see the evolution of Afrikan Heritage House. 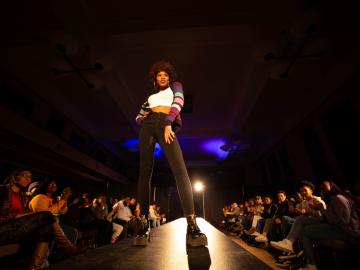 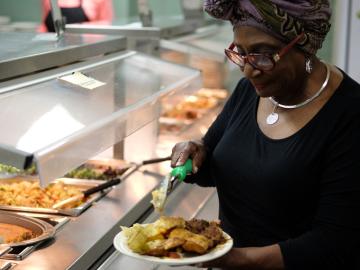 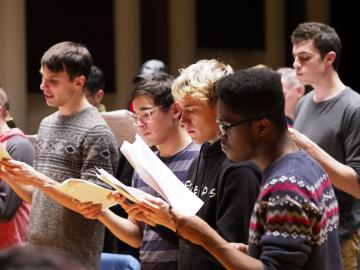 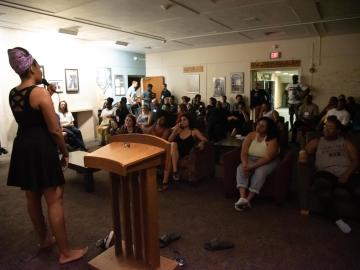