Bernard Rands boasts a catalog of more than 100 published compositions, among them his vocal and instrumental work Canti del Sole, which won the Pulitzer Prize for Music in 1984. 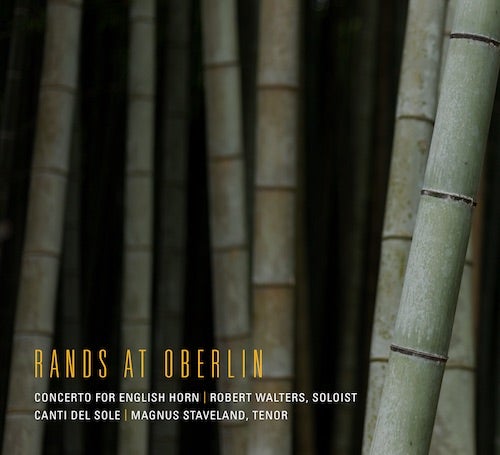 Rands at Oberlin, a new recording on the Oberlin Music label, serves as the recorded premiere of the composer’s Concerto for English Horn. The piece was commissioned by Oberlin Conservatory in honor of its 150th anniversary and written for English hornist Robert Walters, a professor at Oberlin and longtime member of The Cleveland Orchestra.

Rands at Oberlin will be released by Naxos via digital download on iTunes on April 24. The CD will be available on July 3 through U.S. retailers and at Naxos.

The Concerto for English Horn received its premiere performance in November 2015, in a concert featuring Walters and The Cleveland Orchestra at Severance Hall. The recording was created in Oberlin's Warner Concert Hall in April 2017, with Walters and the Oberlin Orchestra directed by Raphael Jiménez. It was engineered by Andrew Tripp and produced by Paul Eachus, both lecturers in Oberlin's Recording Arts and Production program.

Though the concerto made them collaborators for the first time, Rands and Walters share a history that extends several decades back to when both worked in Philadelphia: Rands as composer in residence with the Philadelphia Orchestra, and Walters as a student at the Curtis Institute who also played as an extra in the orchestra.

“I heard that recording,” Rands remembers today, “and I said to my wife: ‘That is the best English horn playing I’ve ever heard in my life. And I’ve heard a lot.’”

Soon thereafter, Rands placed a call to Walters. “I have in my ear a concerto I want to write for you,” the hornist remembers hearing. “We should talk.”

Out of that conversation came a commission initiated by then-Dean of the Conservatory David Stull and cemented by his successor, Andrea Kalyn, who seized upon the opportunity to wed the concerto to the conservatory’s 150th anniversary in 2016.

The concerto evokes the music of Claude Debussy—and the French impressionists who followed him—in subtle and not so subtle ways; the final movement, in fact, is titled “Hommage à C-AD.”

“What I like about the piece is that it doesn’t typecast the instrument,” says Walters. “English horn is pretty much about slow, mournful melodies. My mother used to call it the anguish horn. There’s something tragic about the voice and the sonority.

“Bernard sort of broke away from the typecast aspect of the instrument, which resulted in just a great opportunity for me as a soloist,” he adds. Most notably, that meant steering the horn at times toward uncharacteristically high registers—one of Walters’ strong suits. “He really tailored the piece to my strengths as a player, and also to my personality, which is humbling and exciting.”

Rands, who visited campus in March 2017 for the Oberlin premiere of his concerto and a composition forum with students, also was moved by the collaboration.

“I was touched that they would make this possible for Robert and for me,” he says. “I hope we’ve done well for them celebrating such a long and distinguished institution.”

A special sneak-preview performance of the concerto will be broadcast on the Thursday, April 23, edition of Oberlin Stage Left, the conservatory’s new online series showcasing Oberlin faculty and student musicians as well as distinguished guests. The 7:30 p.m. program will begin with an interview featuring Rands and Walters, led by Associate Professor of Music Theory Jan Miyake. It will be followed by the concerto's second movement, Aubade.

Rands at Oberlin also features the composer's Pulitzer Prize-winning Canti del Sole, which employs 14 different pieces of text in describing a day’s progression from dawn to dusk. It is performed here by Norwegian tenor Magnus Staveland with Oberlin’s Contemporary Music Ensemble, under the direction of Timothy Weiss.

Distributed by Naxos of America, Rands at Oberlin is available through digital music channels worldwide. Oberlin Music is the official record label of Oberlin Conservatory.